Space is sexy, yes. But is it worth spending $45 billion on a long-shot?

Elon Musk's Tesla (TSLA 11.00%) achieved a $1 trillion valuation earlier this week as the electric car company continued to disrupt the established car industry with new technologies such as autonomous driving software, solar power, and rechargeable batteries. Perhaps inspired by this success, Honda Motor Company (HMC 1.32%) says it wants to reinvent itself, too -- but it won't be a 100% makeover.

It's those rockets we'll be talking about today.

Acting on the recommendation of some of its engineers, Honda began researching designs for a small, liquid-fueled rocket in 2019, hoping to join the market for launching small satellite payloads to orbit. Since then, Honda's made enough progress that it's adding rockets to the company's "2030 Vision" statement, released late last month.

Under this plan, the company says it will continue to develop a small rocket, incorporating "control and guidance technologies Honda has amassed through the development of automated driving technologies" to make the rocket "reusable ...  by enabling at least some of the rocket components to land back on earth after the launching." 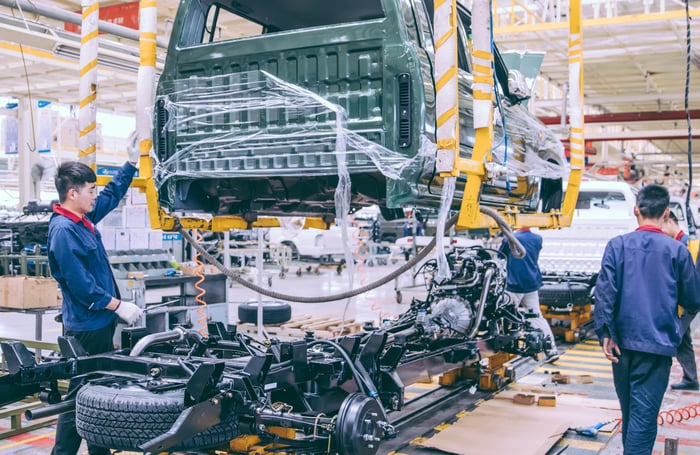 Starting a race at the back of the pack

Well and good. As Britain's The Observer newspaper comments, Honda knows "how to produce highly reliable components at a large scale, and they have the engineering expertise to apply to the challenge of rocketry." And the space market is certainly an attractive one. According to research firm Mordor Intelligence, small satellite launches are a $4 billion-a-year industry today, and will grow 80% over the next five years.

The problem is that, while rocketry is a new field of work for Honda, it's not exactly a new field, period. With its reusable Falcon 9 rocket, SpaceX is the most obvious example of a company that has not just tackled, but solved rocket reusability. And other companies are exploring reusability too, including Boeing, Lockheed Martin, and Blue Origin here in the U.S., Airbus in Europe, and multiple contenders in China as well.

Granted, most of these companies are focused on large rockets launching large payloads -- satellites massing several tons or more. But the small-rockets field looks pretty crowded, too. Rocket Lab is already making progress on partial reusability, as is newcomer Relativity Space. Virgin Galactic and its sister company Virgin Orbit both utilize reusable "first stages" -- in the form of airplanes -- to air-launch rockets to space, and Virgin Galactic also lands and reuses its spaceplanes.

In short, Honda may have had a good idea in deciding to invent small, reusable rockets -- but it's hardly a new idea. Despite beginning work on this technology two years ago, the company will be playing catch-up for a very long time, and against multiple more advanced competitors.

Of course, Honda does have one advantage that a lot of its rivals lack: A booming car business that generated more than $131 billion in revenue last year, and $7.5 billion in annual free cash flow (according to data from S&P Global Market Intelligence). That's money Honda can invest in its new rocket venture -- even more money than the $1 billion a year that Jeff Bezos says he's investing in Blue Origin -- and far more than companies like Rocket Lab, Virgin Galactic, or Relativity Space could ever hope to raise without sizable sales of stock.

($7.5 billion, incidentally, is also the amount Honda would have to spend annually over the next six years in order to reach its goal of $45 billion, total, invested in its several new tech ventures.)

Would, could -- but should?

Then again, it's not Honda's ability to invest $45 billion in rockets (or in robots, or in air taxis) that I dispute -- it's the logic of spending essentially every spare dime (or yen) of cash it generates, for more than a half decade, on ventures that might not ever work out -- when it has a perfectly good and profitable car business in hand already.

When you consider that Honda has spent the last six years trying to develop an airplane-building business, for example, and that after six years of trying, the Honda Aircraft Company still racked up $285 million in losses on the venture last year (and $370 million the year before that, and $354 million the year before that), the weight of evidence suggests that Honda is probably better off sticking with cars and competing with Elon Musk's Tesla -- and leaving the space stuff to SpaceX.

GM and Honda Deepen Their Partnership
401%