These tech titans are looking to take blockchain beyond its cryptocurrency roots.

While cryptocurrency may have been the application that first brought blockchain to people's attention, recent slumps in digital currencies have many wondering whether the blockchain technology has any other practical application. We asked three of our contributors to look for signs that blockchain has a life beyond an alternative form of money. They pointed to inroads made by Amazon.com ( AMZN -1.81% ), Microsoft ( MSFT -0.15% ), and IBM ( IBM -0.15% ) in blockchain-enabled technologies and indicated those companies may be worth watching as a result. 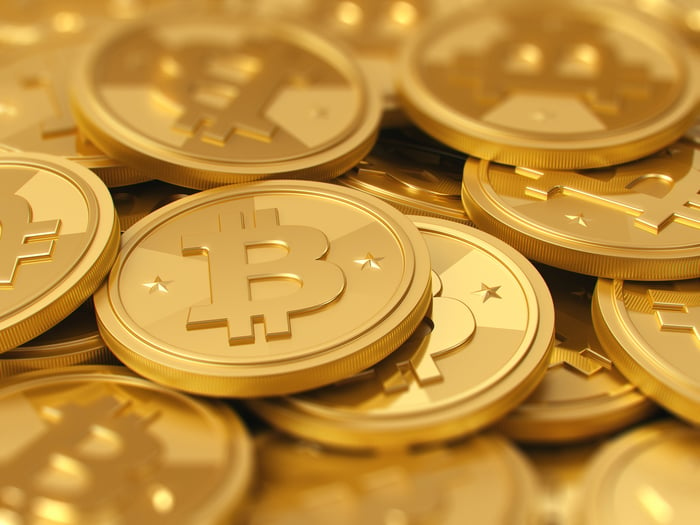 This retailing pioneer is also a technology behemoth

Todd Campbell (Amazon): Best known for dominating the e-commerce market, Amazon also has a huge technology services business that stands to benefit from growing adoption of blockchain solutions by its corporate customers.

Amazon Web Services (AWS) is an offshoot of the computing horsepower Amazon requires to manage its e-commerce business, but over the past few years it's grown into one of technology's biggest stars.

To keep demand for its IT services coming, Amazon launched blockchain offerings that allow companies to use templates to create large blockchain platforms that can be easily integrated with other popular IT tools offered by Amazon. It's also leveraging its AWS Partner Network (APN) to connect customers with partner businesses with distributed ledger know-how.

The e-commerce giant's got plenty of business already for AWS -- sales grew 46% year over year in Q3 and its operating profit eclipsed $2 billion -- but tailwinds from blockchain could still help it attract more customers and expand existing relationships, making it a blockchain stock investors ought to own.

Keith Speights (Microsoft): After dominating the PC software industry starting in the 1980s, Microsoft fell out of favor among investors for much of the 21st century. Some might have viewed Microsoft, whose nickname is "Mister Softee" because of its stock symbol, as an old fuddy-duddy. But Mister Softee has delivered some surprises, including its prowess as an emerging leader in new technologies like blockchain.

Microsoft's Azure cloud computing service was the first to connect blockchain with the cloud. The tech giant has also, without much fanfare, connected its blockchain services to a growing list of applications, including its own Office 365 Outlook and Sharepoint Online, as well as other applications belonging to other companies such as salesforce.com and Twitter.

Blockchain is only one of the reasons why Microsoft is a stock to watch closely now, though. The company, already one of the leaders in artificial intelligence (AI), has beefed up its AI portfolio with a couple of key acquisitions. Most recently, Microsoft bought XOXCO, a small conversational AI start-up that developed the first commercial chatbot on Slack and a suite of developer tools.

Despite the market's turbulence, Microsoft stock has performed quite well so far in 2018. With its focus on leading in technologies like AI and blockchain along with its solid dividend, I think Mister Softee just might deliver pleasant surprises to investors in the future.

Money talks -- and you still have to eat

Chuck Saletta (IBM): Technology titan IBM has been struggling in recent years as its traditional business lines have softened over time. Big Blue has been working to replace that revenue with emerging technologies like artificial intelligence and blockchain. While on a corporate level it takes time to transform a lumbering giant like IBM, the company's push into blockchain is certainly focusing on key industries like finance and food.

For instance, IBM recently launched the blockchain services behind CLSNet, which is automating the settlement and trade netting processes for foreign exchange transactions. If you've ever done business, traveled, or invested internationally, you know the added costs and complexities that come with currency conversions. By better automating and bringing blockchain's transparency to that currently manual and somewhat opaque process, there's a good chance liquidity will improve and costs will drop.

In addition, IBM is making a big blockchain bet in the food industry with its "Food Trust" service. The vision behind that service is improved transparency and accountability throughout the end-to-end supply chain. The anticipated benefits for you as a consumer include higher trustworthiness in how your food was produced and handled from source to store. From a producer perspective, costs of recalls and waste could come down, as issues and their causes become faster and easier to pinpoint.

Money and food are two of the cornerstones of modern life throughout the world. While it will take time to see these services grow, if IBM's blockchain solutions deliver on their promises of lowering costs and improving transparency, they could result in huge wins for the company. IBM's transition to its new business model is taking time, but it's certainly worth watching now to see if it can drive value from its investments in blockchain for that critical infrastructure.