The retailer's decision to ban firearm sales to anyone under 21 hurt sales in related departments.

Dick's Sporting Goods (DKS -14.22%) shot itself in the foot when earlier this year it both banned the sale of modern sporting rifles (MSR) at its Field & Stream stores and prohibited adults under 21 from buying firearms. The backlash against the retailer was so great that double-digit comparable sales declines in hunting and related categories dragged down the performance of the entire company.

But rather than admit it made a mistake and reverse its policy decisions, Dick's is instead removing the hunt category altogether at 10 stores where the category is seriously underperforming and replacing it with something else, like baseball equipment. It is also considering closing down all 35 Field & Stream stores. 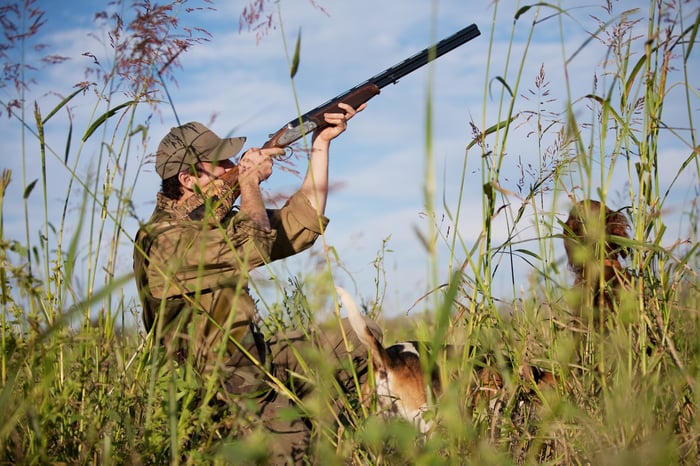 Reverberations from the firearms industry

The decision to stop selling MSRs like AR-15s at its Field & Stream stores following the Parkland school shooting in February was by itself not consequential. Dick's Sporting Goods had already banned their sale at its 700 or so namesake stores in 2012 after the Newtown school shooting, but had continued to sell them at its 35 Field & Stream stores.

Raising the age of those who could buy firearms was a policy that both Walmart and grocery store Kroger also implemented, but the combination of the two actions had a greater impact on Dick's because it also hired lobbyists to push for additional federal gun control policies, which angered gun owners, enthusiasts, and the industry.

Not only did gun owners call for a boycott of the retailer, but major gun manufacturers including Mossberg, Springfield Armory, and MKS Supply stopped doing business with it. The National Shooting Sports Foundation also voted unanimously to kick Dick's Sporting Goods out of the industry trade group.

While the general state of ill health in the firearms industry has masked just how deeply the policy mistakes are costing Dick's, we can see that the bad numbers are accelerating. Comparable sales were down 0.9% in the first quarter, 1.9% in the second, and 6.1% in the third. Even when accounting for the extra selling week in 2017, comps were down 2.5%, 4%, and 3.9%, respectively across 2018.

More telling is the double-digit declines experienced in the hunting category, because customers who would have purchased firearms also would have bought other outdoor gear. CEO Ed Stack says the declines in hunting and hunting-related electronics were responsible for a 255-basis-point drop in comps in the most recent quarter.

Dick's gun-sales policies are having such an outsized impact now because the fall hunting season is upon us, and demand for firearms, particularly long guns, is at its height. For example, where FBI background checks for the purchase of handguns were about double those of long guns in July, in November long gun background checks surpassed those of handguns.

In its just-released fiscal second-quarter earnings report, Smith & Wesson owner American Outdoor Brands reported long gun sales jumped 20% from the year ago period, while handgun sales were up only 5%.

Yet Dick's is standing by its decision, pointing out that firearms and electronics are low-margin products, so despite the steep decline in sales it was still able to post a 213-basis-point increase in merchandise margins for the third quarter. Dick's also raised its earnings guidance for the full year, increasing it to $3.15 to $3.25 per share from the guidance it gave last quarter of a range of $3.02 to $3.20 per share.

Dick's Sporting Goods is committed to its policy of limiting the availability of firearms to its customers, even if it means sacrificing sales in related departments. Net sales continue to fall as a result, though it is making the sales it does record more profitable.

The company's stock is up 26% in 2018 -- and despite the headwinds, it will be lapping its controversial stance very soon. That could make next year's results look better by comparison, and means its stock may have more room to rise.