National shopping-club chain BJ's Wholesale Club Holdings (NYSE:BJ) recently reported on its first complete quarter as a public company following its initial public offering in late June. In its fiscal third quarter of 2018 (ended Nov. 3), the perennial challenger to Costco Wholesale (NASDAQ:CSCO) posted fairly healthy results. A comparable-sales increase over the prior-year quarter of nearly 2% (excluding fuel) contributed to a top-line improvement of 4.3% to $3.2 billion, and the company raised its full-year revenue and net earnings outlook. Below, let's review key management comments, made during the organization's earnings conference call on Nov. 21, which illuminate progress since its IPO.

Membership is a profit driver

As BJ's has returned to the public markets after a seven-year period under private ownership, the company must persuade investors of the relative strengths of its business model vis-a-vis competitor Costco. While Costco is lauded for its extremely stable margins, and its use of membership fees as a vital earnings driver, BJ's management are eager to demonstrate that their company can benefit from both margin expansion and membership-propelled earnings growth.

During the earnings call, the CEO observed that membership is the most important investment the company will make in the near term. Baldwin pointed out that annual membership fee revenue of approximately $300 million ends up supplying a significant portion of earnings -- it's approximately half of the company's yearly adjusted EBITDA.

Through the first three quarters of the year, membership fee revenue has increased roughly 9% against the prior-year period. This is primarily the result of a successful membership fee increase of $5 (to $50 annually) instituted at the beginning of calendar 2018.

BJ's Wholesale has increased its marketing investment in 2018 to amplify membership, including a recent cessation of its membership requirement from mid-October to early November, in order to attract new shoppers with the aim of converting them into club aficionados.

During the call, management also emphasized that in the coming quarters, BJ's will focus on reenrolling lapsed members to further expand its customer base. Finally, it intends to ramp up the focus on membership acquisition through digital channels -- an activity critical to signing up younger customers. 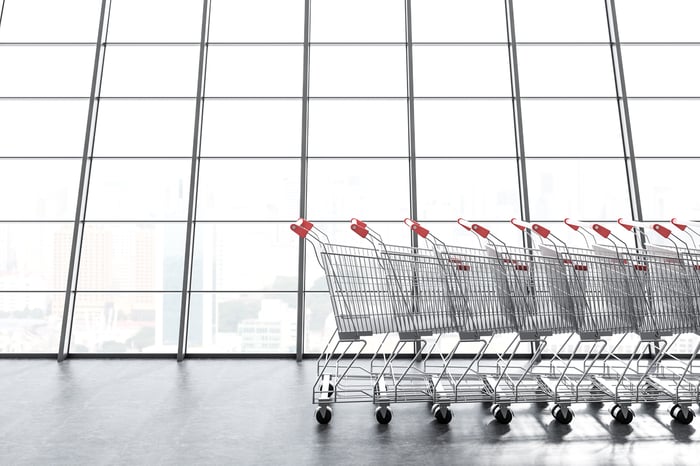 Excluding the impact of gas sales, our merchandise gross margin rate increased by approximately 60 basis points over last year, driven by our procurement initiatives. Our reinvention of procurement, which began nearly three years ago, has been considerable. We have surpassed $300 million in procurement cost savings due to these efforts, and we continue to innovate to drive and optimize assortment and achieve the next waves of savings.

Without meaningful savings from the company's efforts to streamline purchasing, gross margin may have headed in the opposite direction this quarter. BJ's experienced deflationary pressure in food categories during the last three months, specifically in beef, pork, fresh fruit, and vegetables, neutralizing margin gains in TVs and apparel. Over the last two years, a highly competitive food-retail environment has compelled grocers to pass on declining costs to customers. As CFO Bob Eddy explained above, procurement initiatives more than absorbed gross-margin compression factors.

BJ's is currently exploring two avenues to dilute the effect of deflation. The first approach is to increase the sale of prepared foods, which tend to carry a higher margin than fresh produce or packaged foods. The second is to juice sales of the company's own private-label brands. Management cited BJ's Wellesley Farms private-label operation, which launched fresh seafood and fresh packaged soups in the third quarter, as an example of company-owned private-label growth. The company reported 20% penetration of its own private-label brands within total merchandise sold during the third quarter.

Balance-sheet improvement is a strategic goal

The strength in this year's cash flow is driven by our improved profitability and strong working capital management. As a result, we've continued to pay down debt and our net leverage to LTM [last twelve months] adjusted EBITDA ratio at the end of the quarter was 3.3x. We expect to further reduce our leverage supported by our strong cash generation in the fourth quarter.

As I discussed with my Fool.com colleague Vincent Shen on a podcast this summer, shortly after BJ's went public, the company's debt load presents a potential headwind to stock appreciation. But it seems management are intent on trimming leverage and improving the company's credit profile. The leverage ratio Eddy mentioned of 3.3 (that is, total debt is 3.3 times annual adjusted EBITDA) can be described as moderate leverage -- and further reduction of this ratio is in sight.

During the quarter, the company restructured interest payments on both its first-lien term loan and its asset-based lending (ABL) borrowing facility. Approximately 60% of the company's interest expense has now been fixed through swap transactions at a rate of LIBOR (London Interbank Offered Rate) plus 3%. This "repricing" of debt will prove smart should interest rates continue to creep up.

During the third quarter, interest expense declined year over year from $42.3 million to $33.0 million, since the company used IPO proceeds to pay down a $623.2 million senior secured term loan in early July. A smaller base of outstanding debt and lower interest expense will benefit net earnings (and cash flow) in the next fiscal year and beyond. Investors can expect more balance sheet improvement when BJ's Wholesale next reports earnings in February.