Straightforward businesses can be found in all sorts of industries, including surgical tools, shoes, and storage space.

Investing can be complicated, but the companies behind those investments don't have to be. As an investor, knowing exactly how the investments you own make their money certainly helps you sleep better at night, particularly when the market is moving against you.

With that in mind, we asked three of our contributors to point out companies with publicly traded stocks that were straightforward to understand. They picked Intuitive Surgical (ISRG -1.86%), Nike (NKE -0.36%), and Public Storage (PSA 0.20%). 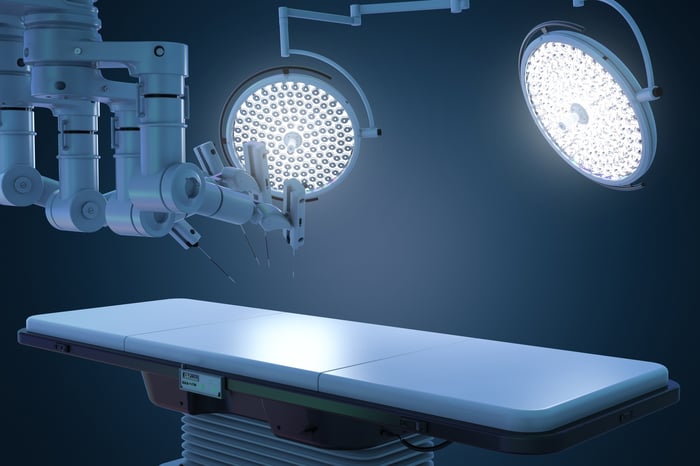 Keith Speights (Intuitive Surgical): You might think that the stock of a company that makes robotic surgical systems would be anything but easy to understand. But that's not the case at all for Intuitive Surgical. While its technology is complex, the company's business is quite straightforward.

Intuitive Surgical sells its da Vinci robotic surgical systems to hospitals and other healthcare providers across the world. These systems consist of a robotic arm with specialized surgical instruments and cameras with a control center several feet away that surgeons use to control the robotic arm and instruments. It's complicated, for sure.

But Intuitive Surgical basically uses the old razor-and-blades business model. The company makes money on the sale of da Vinci systems, but the big bucks are made on supplying replacement instruments, accessories, and services. Last year, 71% of Intuitive's total revenue came from these recurring sources -- and the percentage is increasing.

Intuitive Surgical's growth opportunities are also easy to understand. As populations across the world age, more surgeries are required -- notably including the types of surgery where da Vinci is most widely used. Intuitive also continues to explore ways to use robotic surgery for additional types of procedures. Put all this together and it means that Intuitive Surgical's momentum seems unstoppable with more systems sold and higher recurring revenue. Pretty simple.

Nike's an intriguing stock to buy right now. U.S. sales growth and gross margin have been negatively impacted by industrywide inventory imbalances and price cuts, but those headwinds may be ending.

In fiscal Q1 2019, U.S. sales grew 6% year over year, up from 3% year over year in fiscal Q4. That growth, plus double-digit international growth, including a 24% year-over-year jump in China, resulted in companywide sales increasing 10% in the past year.

Gross margin in the quarter was encouraging, too. Its 0.5% increase to 44.2% suggests the company's getting its arms around the industry's pricing and inventory challenges. If so, then net income could increase meaningfully this fiscal year from the $1.9 billion it earned in fiscal 2018.

If sales and margin show gains again when management reports fiscal Q2 results on Dec. 20, then I think Nike's shares can deliver market-beating returns from here. Especially since its stock price has retreated nearly 20% since October and holiday sales should provide tailwinds. Industry watchers expect holiday sales will be up 4.3% this year, and that should support demand for Nike products.

They rent out storage space for your stuff

Chuck Saletta (Public Storage): Public Storage runs one of the most straightforward businesses around. It owns and operates storage facilities that let people and businesses hold onto stuff they need or want to keep but don't necessarily have to have immediately on hand. The company got its operational start in 1972 and has grown both organically and through acquisitions to become the largest owner-operator in the self-storage space.

And as such, Public Storage has the advantage of scale. Its overhead costs can be spread across many sites. In addition, its portfolio spans many locations across the country, which has allowed it to earn a solidly investment-grade debt rating. That gives it access to fairly attractive borrowing costs.

From an investor's perspective, Public Storage also offers a fairly straightforward proposition. As the company is structured as a real estate investment trust (REIT), it must pay out at least 90% of its income to its shareholders as a dividend. That means that as long as Public Storage's business remains profitable, its shareholders will receive a large fraction of those profits in the form of cold, hard cash.

Speaking of those dividends, Public Storage currently pays out $2 per share per quarter, a rate it has maintained since December 2016. While that payment is a bit above its accounting profits (common among REITs), Public Storage's dividend looks covered by its operating cash flows. That indicates that it likely has the ability to maintain its payout as long as its operations remain solid, which could very well be for quite a long time.