Please ensure Javascript is enabled for purposes of website accessibility
Log In Help Join The Motley Fool
Free Article Join Over 1 Million Premium Members And Get More In-Depth Stock Guidance and Research
By Matthew Frankel, CFP® - Updated Jun 22, 2018 at 7:52AM

With favorable trends and a dominant position in a fragmented industry, this dependable dividend stock could be a great addition to your portfolio.

The best kind of dividend investment is one that not only has a strong and reliable income stream, but that also grows in value over time without taking on too much risk. There are several of these to be found in the real estate sector, and one of the best from a long-term perspective is Public Storage (PSA -0.15%). Here's why Public Storage's best days are still ahead of it, and why the company's stock could be an excellent choice for your portfolio. 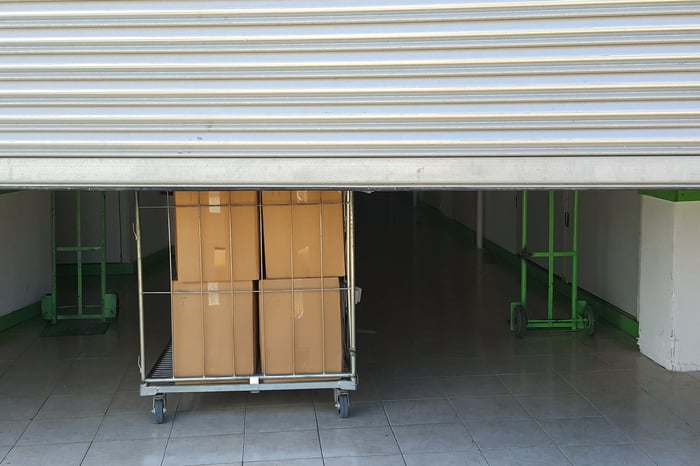 In fact, Public Storage is such a dominant player in the self-storage industry that it's twice as large as the next four publicly traded storage companies combined (U-Haul, Extra Space, Cube Smart, and Uncle Bob's). A component of the S&P 500 index, Public Storage is the third largest real estate company in the world, of any kind.

Favorable trends for the industry and Public Storage in particular
The primary reason I love Public Storage as a long-term investment is that it's a dominant leader in a highly lucrative and growing industry.

Self-storage has been one of the fastest-growing commercial real estate sectors over the last 40 years, thanks to favorable demographic trends that still apply. Larger populations, especially in the areas where new storage facilities are being built, have increased the addressable customer base. Americans in general have more "stuff" they need a place for these days, as evidenced by the fact that 9.5% of American households rent storage space today -- a sharp increase from the 6% rate of 20 years ago. Supply of storage units has increased dramatically over the past few decades, but occupancy has actually remained steady over that time as well.

Public Storage has done a good job of capitalizing on the favorable self-storage trends so far, and is in a strong position to continue to do so. The company carries virtually no debt -- just $47.7 million compared to its market cap of more than $36 billion. Public Storage prefers to play it safe as opposed to using leverage to boost returns, as the business is profitable enough without it. However, the company has said it might issue debt in order to take advantage of historically low interest rates, which could provide an additional profitability boost in the coming years.

Self-storage properties have about half the maintenance expense of most other forms of real estate, which can make them highly profitable -- in fact, Public Storage's properties can break even with just 30% occupancy (current companywide occupancy is at 90%).

Finally, Public Storage is the clear leader in a highly fragmented industry, which means there will be lots of opportunities to acquire and expand its market share. In fact, the top six companies in the industry combine for just a 12% market share, and there are more than 30,000 separate self-storage companies in the U.S. that each operate fewer than nine facilities.

As the largest and most recognizable company in the industry, Public Storage has pricing power and economies of scale working in its favor, and also has more financial flexibility than its peers to take advantage of new opportunities as they come up.

As far as performance goes, consider that Public Storage has averaged total returns of 17.2% per year over the past 20 years, including the recent market pullback. To put this in perspective, a $10,000 investment in Public Storage in 1995 would be worth approximately $239,000 today.

Since the self-storage business tends to be more profitable and less costly to maintain than other types of real estate, the industry tends to outperform other types of commercial real estate over long time periods. In fact, a study using data from the National Association of Real Estate Investment Trusts found the following average performance for the 15-year period from 1997-2011.

Notice the last column of the chart (standard deviation). This shows that not only did self-storage outperform, but that its performance varied less from year to year -- it was more consistent.

To further illustrate this, take a look at how Public Storage handily outperformed leaders in the retail and apartment REIT industries as well as the S&P 500 over the past 20 years. 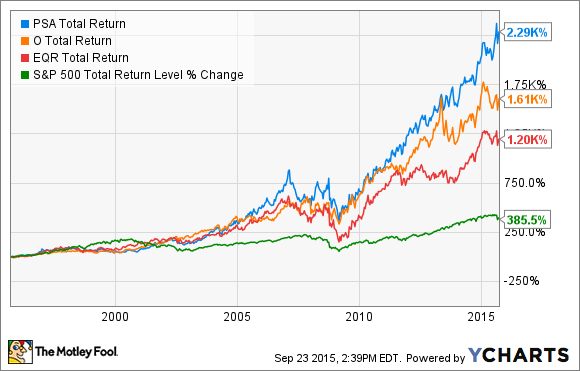 Finally, Public Storage's current dividend yield of 3.3% isn't exactly low, but is significantly lower than many other REITs. However, keep in mind that the company has done an excellent job of increasing its dividend. In fact, over the past 10 years, the dividend has increased by an average of 12% per year -- which should help income-seeking investors keep up with inflation and then some.

A word about valuation
Now, when buying a stock for the long term, a stock's current valuation should be a secondary concern, as the potential over the next several decades is much more important. However, it's worth mentioning because investors may be turned off by Public Storage's valuation.

The best way to assess a REIT's earnings is with its Funds From Operation, or FFO, so the price-to-FFO ratio is a good metric for comparing REITs. If you annualize Public Storage's latest FFO ($2.15 per share in the second quarter), its P/FFO of 24.2 seems to be rather expensive when compared to peers, which are generally in the 17-20 range right now.

However, make sure you consider the big picture. First of all, with the strong long-term potential, high profit margins, and history of stability and outperformance, I feel that Public Storage deserves a premium valuation. Since Public Storage has virtually no debt (peers average around 40% debt-to-capitalization), the company's reduced vulnerability to recessions as well as its superior financial flexibility also warrant consideration.

So, although shares trade for a lofty valuation, I feel that they are still fairly priced given these factors.

Beware of the risks
While I certainly feel like Public Storage has an exceptional risk/reward profile, that doesn't mean there aren't risks to consider. For example, although the self-storage industry has historically been less vulnerable to declining occupancy and defaults than other types of real estate, that is still a significant risk -- especially with occupancy rates as high as they are. A U.S. market crash could certainly cause a wave of defaults and vacancies, and erode the company's profit margins.

While Public Storage doesn't have interest rate risk in the sense that it depends on low-interest financing, higher interest rates are bad for REITs as a whole. Essentially, if the Federal Reserve decides to raise rates, it can make other income investments like bonds more attractive to investors, which can create selling pressure on "riskier" investments like REITs.

The Foolish bottom line
While there are indeed some risks associated with Public Storage, the favorable industry trends, and the company's history of responsible shareholder-friendly management makes Public Storage a smart investment you could hold onto forever.