Daniel Miller, Chuck Saletta, and Nicholas Rossolillo
(TMFTwoCoins)
Author Bio
As a Motley Fool Industrial Specialist, I use my marketing and business background in the automotive industry to evaluate major automakers and other large industrial corporations. Follow me on twitter for tweets about stocks, cars, sports, and anything I find amusing. Follow @DanielMillerTMF

Investors willing to stomach the wild risk that comes with penny stocks should consider looking at more stable and less speculative investments that also offer lucrative upside. It's not an easy task finding stocks with such massive benefits, but here's why three Motley Fool contributors believe that Mattel (NASDAQ:MAT), Fitbit  (NYSE:FIT), and NIO (NYSE:NIO) could end up being far more rewarding investments than penny stocks.

It will probably be more fun than penny stock speculating

Chuck Saletta (Mattel): Toys have always been a trend-driven business, and toy titan Mattel has missed the trends for far too long. Between struggles with its iconic Barbie line, being overly impacted by the Toys R Us bankruptcy, and now facing generic competition, its shares have suffered substantially. Indeed, they've recently touched upon multiyear lows driven by all the substantial and out-in-public bad news.

Yet for all the bad news surrounding Mattel, there's reason to believe that the company does, in fact, have a future. It clearly recognizes the challenges it's facing. It suspended its dividend to save cash, and it's in the middle of a restructuring that eliminated more than 2,200 jobs as a further move to trim expenses. In light of all those cost cuts, analysts expect the company to return to profitability in 2019.

For a company that delivered nearly $500 million in profits in 2014, Mattel's recent market capitalization of less than $4 billion represents the market's belief that the company's best days are behind it. Despite its challenges, Mattel still takes in billions in revenue each year. That should give investors some confidence that if it gets its cost structure in line, it truly can return to profitability.

An investment in Mattel today does require the belief that its turnaround really will succeed. While the old saying that "turnarounds seldom turn" still holds true, all Mattel really needs is for its cost cutting to take root to allow it to sustain its operations. Add the possibility that it might someday actually catch a hot trend in the toy business, and its shares may very well again command the premium they once did. There's risk involved to be sure, but the path forward is much clearer than with most penny stocks.

Plenty of ups and downs without (as much) wild speculation

Nicholas Rossolillo (Fitbit): If volatility is what you're after, wearable fitness tracking company Fitbit is sure to deliver. The company has made good on its rebound strategy, slowing its falling market share in the global wearables industry with the Versa smartwatch release early in 2018. Yet with each quarterly earnings release this year, an initial rebound for the stock has been reversed, as investors still aren't convinced Fitbit is for real.

And on one hand, that skepticism is deserved. Though the company is knocking on the door of profitability again (unadjusted net loss was $2.1 million in the third quarter of 2018 compared with a $113.4 million loss the year prior), fourth-quarter revenue is expected to be "greater than $560 million" compared with $571 million in the fourth quarter of 2017. That's because the number of devices sold keeps falling, offsetting Fitbit's rising average selling price per unit.

The company knows that selling hardware is a volatile business, so it has been working to add premium and subscription software services to its platform this year. It's all part of a multiyear turnaround strategy to become a health and wellness company as much as it is a technology concern. Selling software-based services is a lucrative business, one that typically carries higher profit margins than the manufacture and sale of devices. It isn't a slam dunk, though -- especially with Apple's (NASDAQ:AAPL) Watch dominating the smartwatch category, not to mention the tech giant's own aspirations in the connected health industry.

Nevertheless, Fitbit's stock has been beat up again, retreating 30% from its post-third-quarter rebound price -- despite beating expectations and claiming the world's second-most-popular smartwatch with the Versa in less than a year's time. For investors OK with high risk and high volatility, shares of Fitbit could be in for another upswing, not to mention more returns if the company continues to execute on its ambitious healthcare strategy over the next few years.

Daniel Miller (NIO): If we're being honest, most investors are lured to penny stocks due to wild speculation and the dream of massive gains. However, that get-rich-quick strategy can often burn investors. Instead of highly volatile and speculative penny stocks, check out NIO, a Chinese manufacturer of premium electric vehicles. The company often referred to as China's Tesla offers investors wild upside, as electric vehicle sales are poised to soar in China over the coming decades. But with a large $7 billion market capitalization, it is a much more stable investment than penny stocks.

If you haven't heard of NIO, you're not alone. The company only began trading on the New York Stock Exchange the week of Sept. 10, 2018, and just turned in a strong third-quarter result. When you break down successful long-term investments, it often comes down to the simple concept of solving a problem. Currently, China is dealing with massive pollution problems, and the government has made growing its electric vehicle (EV) market a top priority, which would obviously benefit NIO's business. 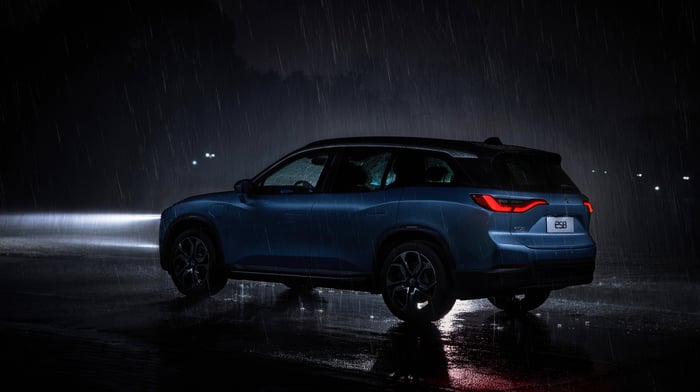 For example, did you know that to buy a standard combustion vehicle in a major Chinese city, you have to obtain a special license through a lottery system in which the odds of winning are lower than 1%? Then, if you're lucky enough to win, you have to pay roughly $14,000 to purchase the license. On the flip side of those wild costs and low lottery chances is an EV license, which is free and open to anyone. That's quite the incentive to switch to an EV.

There's also an overlooked reason NIO is intriguing at the moment. While many investors are weary, as they should be, of the growing trade tensions between China and the U.S., NIO should be less impacted. That's simply because if tensions ease between the two superpowers, NIO's business should improve as confidence among consumers increases and general uncertainty decreases -- a better environment for all. If progress remains bumpy or worse, NIO is still well positioned compared to competitors such as Tesla, as its manufacturing is locally based.

In Nio, you have a company that is able to help solve one of China's major problems, and it's relatively safe from trade tensions between the U.S. and China. With far less speculation and wild upside in the coming decades as EV sales soar in China, with the company's market capitalization at $7 billion, this is a far better option for most investors currently eyeballing penny stocks.