Find out which stocks climbed on an important day for monetary policy.

The stock market had another volatile session on Wednesday, initially posting strong gains, then giving up ground as investors tried to predict what the Federal Reserve's monetary policy body would say about the course of interest rates. In the end, the Fed moved ahead with its anticipated rate hike, but it gave guidance for 2019 that suggested fewer future interest rate increases than market participants had previously anticipated. That led to a short-lived bounce higher for most indexes before they turned lower again. At the individual-company level, some stocks were able to hold onto solid gains despite the market volatility, thanks to good news that sent their shares higher. Winnebago Industries (WGO 0.46%), Jabil (JBL 1.01%), and Tallgrass Energy (TGE) were among the best performers on the day. Here's why they did so well.

Shares of Winnebago Industries soared 14% after the recreational vehicle specialist reported its fiscal first-quarter financial results. The company said that revenue jumped by nearly 10% from the prior-year period, citing not only solid gains in the towable RV segment but also better margins in its sales of motor homes. Lower tax rates helped lift bottom-line performance sharply, and Winnebago also gave its shareholders a reward in the form of a 10% increase in its quarterly dividend. With interest in RVs among millennials remaining high, Winnebago could have the wind at its back for the foreseeable future. 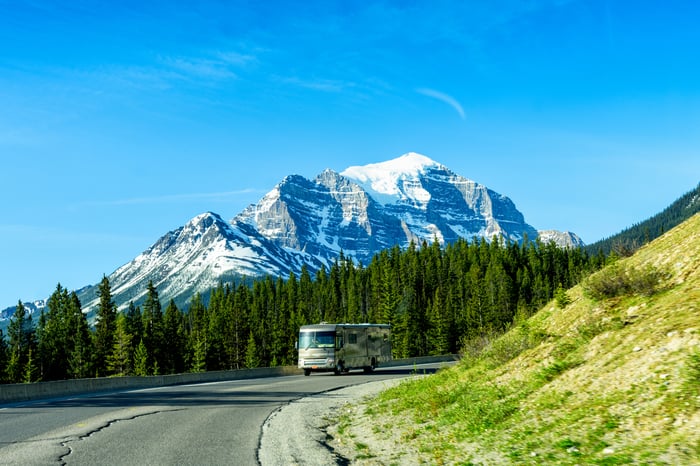 Jabil stock rose 7% following the manufacturing services provider's release of its report for the fiscal first quarter. The company saw an impressive 16% jump in revenue, led by extremely strong gains for its electronics manufacturing services division. CEO Mark Mondello attributed the gains to Jabil's strategy of targeting markets with the highest potential and improving its operational performance, and he also believes that the company's positive momentum will continue into the current quarter. With favorable guidance for sales and earnings in the fiscal second quarter, Jabil looks like it's reversed its rough patch from last quarter.

Is Tallgrass in play?

Finally, Tallgrass Energy's partnership units finished higher by nearly 14%. The move came during the afternoon hours after a report from Bloomberg suggested that institutional investor Stonepeak Infrastructure Partners and others might look to make an offer to purchase the oil and natural gas pipeline operator. Neither side immediately confirmed the report, but considering the recent plunge in energy prices, it's natural for there to be more interest in consolidation within the industry. Given how promising Tallgrass Energy's future looks, it wouldn't be surprising to see a going-private deal surface soon.