Caught up in the October (then November, now December) stock sell-off, shares of oil and gas pipeline operator Kinder Morgan (NYSE:KMI) have fallen 16% from their highs of early October. But one analyst believes there's a silver lining to this gloomy cloud of a development: With a target price of $19 a share, investment banker Jefferies & Co. argues that Kinder Morgan is a "real opportunity" for investors. 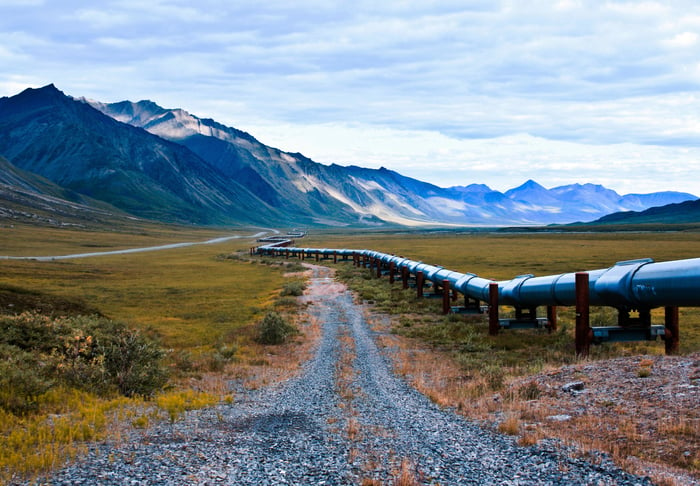 Kinder Morgan, as a reminder, is the nation's largest publicly traded energy pipeline operator, controlling some 84,000 miles of pipelines crisscrossing the country, transporting petroleum, gas, other fuel products, and chemicals. Jefferies considers the company a member of the midstream and refining energy sector, a section of the market about which the analyst is optimistic.

In general, Jefferies argues that U.S. midstream and refining companies like Kinder Morgan have "simplified structures, reduced leverage, minimal equity need, and continued growth" prospects as we head into 2019. Moreover, "U.S. Midstream and Refining equities are approaching year-end at multi-year lows with valuation multiples 15%-30% below three-year averages." In the case of Kinder Morgan in particular, data from S&P Global Market Intelligence show that, over the last three years, shares of the company have sold for an average of 25.1 times forward earnings (or 80 times trailing earnings).

Jefferies makes a good case for seeking value within this sector in general. But why focus on Kinder Morgan stock in particular? Here's one potential reason:

Valued on trailing earnings (which I'd argue is the more reliable comparison, because these are earnings that have actually been earned), Kinder Morgan shares currently cost more than 315 times its $109 million in trailing-12-month profits. That sounds kind of expensive to me. Analysts surveyed by S&P Global, however, on average expect the company to earn more than $2.3 billion in GAAP net income next year. Assuming they're right about that, then at its current $34.4 billion market capitalization, Kinder Morgan stock is selling for just 15 times forward earnings -- a 40% discount to historical valuation, and thus a much better deal than the average midstream and refining stock.

Does such a discount make sense? Not necessarily.

It's true that oil stocks in general are being pummeled lately, and for good reason: Oil prices are plumbing year-long lows, with huge declines being seen this week in particular. That's bad news for oil producers, but not necessarily for oil transporters such as Kinder Morgan. To the contrary, if you think about this logically, lower oil prices should increase demand for oil, and thereby increase the amount of oil and related products flowing through Kinder Morgan's pipes -- and increase the company's profits.

True, over the longer term, there's the potential for decreased oil demand as the economy shifts toward the use of battery-powered electric vehicles for transportation. But even that shouldn't hurt Kinder Morgan too much. Sixty-five percent of the company's assets, after all, are devoted to the transportation of natural gas, which is used both to heat homes and create the electricity that drives electric cars. Only about 13.4% of Kinder Morgan's assets are devoted to carrying oil and natural gas liquids. Similarly, the company gets 63% of its revenue from natural gas transport, versus less than 14% from the transport of oil.

So while increased oil usage has the potential to lift Kinder Morgan's profits somewhat in the short term, decreased demand for oil isn't a huge threat to the company over the long term.

All that being said, although I agree that Kinder Morgan stock is a lot cheaper than it's been in a long time, I still don't believe it's cheap enough to compel you to buy it now. Here's why:

Kinder Morgan shares cost an insane 315 times trailing earnings. Valued by the more lenient standard of free cash flow, the stock costs a still-pricey 23 times trailing FCF. Moreover, while these profits might be relatively safe from decline over the long term, analysts who follow the company don't expect Kinder Morgan to grow earnings much faster than 10% a year or so over the next five years.

Result: Even counting the stock's generous 5.1% dividend yield, I only see Kinder Morgan shares generating a total return of about 15% annually over the next five years -- too little to justify paying 23 times free cash flow, much less 315 times trailing earnings.

So as great a business Kinder Morgan may be, investors should demand even better prices than what we're seeing today before buying Kinder Morgan stock.