Let's take a look at a few standout figures from Nike's quarterly announcement. 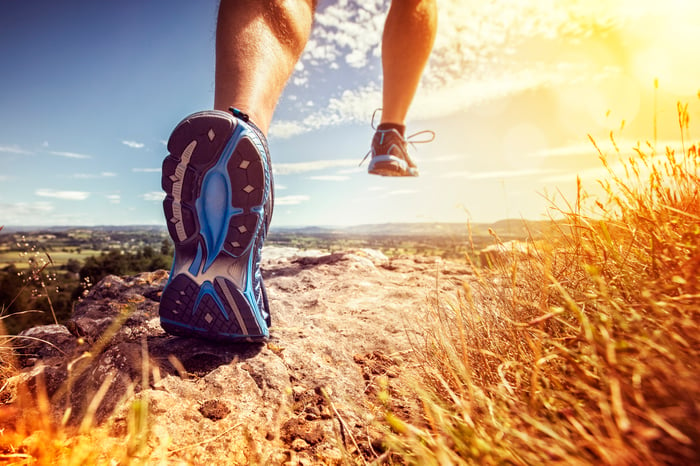 Sales gains accelerated for the second straight quarter in the key U.S. market, which had previously been in a stubborn decline for two fiscal years. Nike appears to have put that slump behind it now, though, with revenue rising 9% this quarter compared to 6% last quarter and 3% at the end of fiscal 2018. Demand was also robust internationally, including in China, so that overall revenue improved 14% after accounting for currency exchange swings.

41%: Increase in the digital business

Nike has put a lot of effort toward maximizing online sales. Those investments paid off this quarter, with the channel expanding by 41%. Executives said the direct-to-consumer business was the common thread connecting growth across its geographic markets, in fact. The U.S. was a standout, though: Domestic digital sales spiked 30% over the Thanksgiving week.

It's good to be the market leader. Nike spent a shade under $1 billion in what it calls "demand creation" -- a mix of advertising, marketing, and brand-boosting activities. Few companies in the world could hope to match that level of branding support, and Nike intends to keep raising that bar so long as it can find effective uses for the cash.

Profitability ticked higher by almost a full percentage point in an acceleration from recent quarters. That success implies that it didn't see much need to mark down products, and suggests the latest releases from Nike's pipeline are resonating with customers around the world. For comparison, the gross margins of rival Under Armour (NYSE:UA) (NYSE:UAA) have been flat through the first nine months of 2018.

When it outlined its long-term rebound strategy in late 2017, Nike predicted that at least half of its growth in the few years that followed would come from innovative product launches. That number turned out to be conservative. So far this year, over 80% of its sales gains can be traced to new platform releases like the VaporMax and Air Max 270 running franchises. That's good news for a few reasons, among them that the popularity of new lines supports higher profitability and improved customer loyalty.

Inventory increased at a much slower pace than sales, which put the company in a healthy selling position across all of its geographies. That, coupled with a stacked schedule of footwear releases starting in early 2019, helped convince management to raise their short-run outlook on both the top and bottom lines. They now see sales gains approaching the low double-digit percentages in 2019, and gross margin expanding by about 0.7 percentage points.

Looking further out, Nike management mentioned many avenues for growth ahead, including booming demographic gains in international markets, and deeper expansions into niches like women's athletic wear and men's yoga apparel. As for global economic risks, CFO Andy Campion said in a conference call with investors that management is aware of "increasing volatility and uncertainty of late on a macro level." Withing that environment, Nike is planning to focus on what it can control, particularly its aggressive product release schedule and its global direct-to-consumer offensive strategy.