Intel is going after a wide range of applications with its newfound ambitions in graphics.

Chip giant Intel (INTC -0.86%) hosted its first-ever Intel Architecture (IA) Day on Dec. 11, 2018. At the event, the chip giant talked about a range of its technologies. Among the technologies discussed was the company's work in graphics processing units (GPUs), which are specialized processors that can render 3D graphics, as well as perform other parallel processing tasks more quickly and efficiently than traditional central processing units (CPUs).

Intel has long developed GPUs, and for more than seven years, the company's mainstream notebook and desktop PC processors have incorporated GPU technology alongside its CPU technology. Those GPUs have never been particularly fast -- if you're a gamer, for example, you'd want to buy a more powerful stand-alone GPU from a company other than Intel -- but they're adequate for most basic computer functionality. 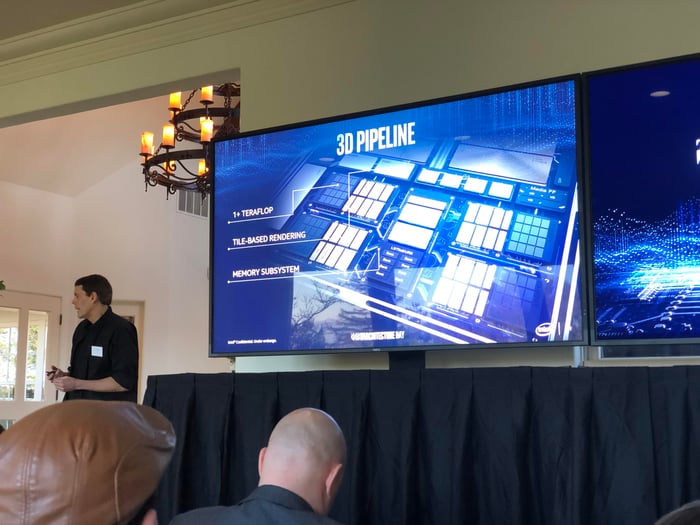 A little over a year ago, though, Intel announced that it planned to bring stand-alone GPUs, often referred to as "discrete GPUs," to the marketplace. Then, earlier this year, the chip giant told investors that its first discrete GPUs would come to market in 2020.

At the Intel Architecture day, Intel didn't show off a discrete GPU prototype or offer any details about the discrete GPU products that it'll eventually bring to market. What it did, though, was show off its next-generation GPU architecture -- known as Gen. 11 -- and talk about its ambitions with the follow-on to Gen. 11, now branded as "Xe" instead of the decidedly less sexy "Gen. 12" moniker.

While this might sound like stuff that should only be of interest to computer-chip nerds, investors should pay attention to -- and frankly, cheer -- Intel's progress and ambitions here.

Broadening the TAM with Xe

During the Intel Architecture Day, Intel showed off a system powered by a future microprocessor with integrated Gen. 11 graphics running a game called Tekken 7 side-by-side against a system powered by the company's old Gen. 9 architecture. Unsurprisingly, the Gen. 11-based system was much smoother. Given that the Gen. 9 architecture is more than three years old now and Gen. 11-based products won't arrive on shelves until sometime in 2019, that's to be expected.

What's probably more relevant to investors is that Intel made plain its ambitions with the upcoming Xe architecture. Unlike Gen. 11 and all other previous Intel GPU architectures, Xe won't be limited to riding shotgun with the company's CPU cores in a future microprocessor -- it's intended to span a much wider range of products.

Check out the following slide from the event: 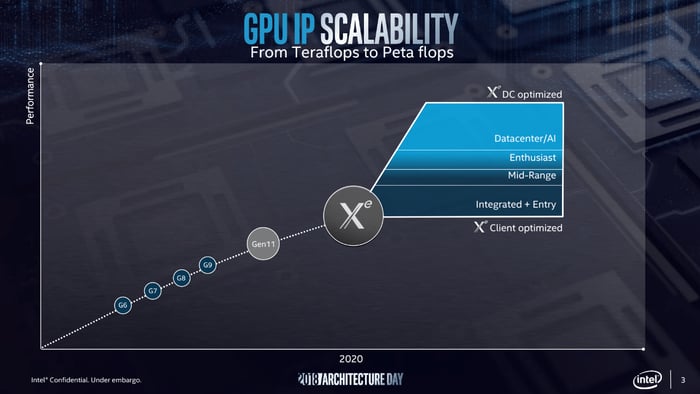 There are a couple of things that investors, in particular, should notice. Intel apparently will be doing two variants of the Xe architecture -- one that's "client optimized" (client in this case refers to devices like PCs), and one that's "DC optimized" (DC is short for data center). You'll also see that Intel's ambitions with these two basic flavors of Xe are broad -- the company is aiming to use this architecture as the foundation for everything from future integrated graphics processors all the way to the most demanding data center/artificial-intelligence (AI) applications.

As an investor, you don't need to concern yourself with the nitty-gritty technical details. Instead, you should see this as the company taking the basic graphics technology that it already develops for its main PC processors and making incremental investments to extend the technology and proliferate it into a lot of other markets. Put another way, Intel is broadening both total addressable market (TAM), as well as its served addressable market (SAM) -- something that should be music to shareholders' ears.

While Intel is expanding its TAM by going after the major discrete GPU segments, the company still needs to execute. That'll mean building performance and price-competitive products for the market, establishing and strengthening a brand (or potentially brands), and building the right business relationships.

However, if Intel's efforts in graphics ultimately prove successful, then the company should enjoy incremental revenue and, ultimately, profits from this push.