Graphics giant NVIDIA (NASDAQ:NVDA) has released graphics cards under its Titan branding with each of its recent GPU architectures. These are generally the company's most powerful consumer-oriented graphics cards -- and it tends to charge a lot for them.

On Dec. 3, NVIDIA announced the newest member of the Titan family: TITAN RTX (which the company nicknames "T-Rex" in its press release). Let's take a closer look at it. 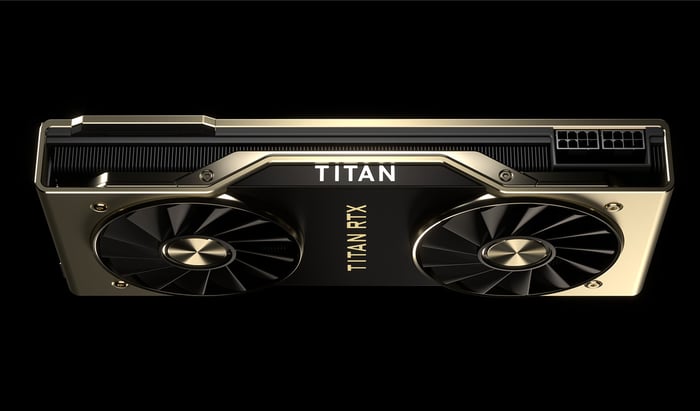 Back in August, NVIDIA announced the RTX 2080 Ti for the gaming market, which easily became the world's highest-performance gaming-oriented GPU, beating out the company's older GTX 1080 Ti, as well as Titan Xp products. The RTX 2080 Ti is based on a chip that NVIDIA refers to by the part number "TU102."

The RTX 2080 Ti wasn't based on a fully enabled version of the TU102 chip, though -- some of the processing cores and memory controllers were disabled.

The TITAN RTX, on the other hand, appears to be based on a fully enabled version of the TU102 chip. On top of that, the TITAN RTX cards incorporate, according to the company, "24GB of high-speed GDDR6 memory with 672GB/s of bandwidth -- 2x the memory of previous generation TITAN GPUs -- to fit larger models and data sets."

The fully enabled TU102 and the additional 13 GB of GDDR6 memory relative to the RTX 2080 Ti aren't cheap, something that's reflected in the TITAN RTX's $2,499 price tag. (It's worth noting that this is actually $500 cheaper than the company's prior-generation TITAN V.)

By comparison, NVIDIA's RTX 2080 Ti Founders Edition card sells for $1,199. That's a lot for a gaming-oriented GPU (NVIDIA indicated at its analyst day earlier this year that the average selling price of its gaming GPUs is around $200), but compared to the TITAN RTX's price tag, that's a modest sum.

It's worth noting, though, that this product isn't being explicitly aimed at the gaming crowd (although I'm certain that there will be some deep-pocketed gamers who will buy one or even two of these). Instead, NVIDIA is pitching it more broadly, as you can see in the following text from the press release: "Designed for a variety of computationally demanding applications, TITAN RTX provides an unbeatable combination of AI, real-time ray-traced graphics, next-gen virtual reality and high performance computing."

Later on in the press release, NVIDIA says that it's "built for AI researchers and deep learning developers," claims it's "perfect for data scientists," and asserts that with the card, "content creators create their best work."

The launch of the TITAN RTX isn't a game changer for NVIDIA's business -- it's a technically impressive halo product that serves to cement NVIDIA's dominance in the consumer and so-called "prosumer" portions of the GPU market. However, I'd imagine that the revenue contribution from this product (and, more generally, NVIDIA's TITAN family of GPUs) is relatively small compared to the company's other, higher-volume product lines.

I'd like to reiterate my conclusion from a recent article with respect to why it makes perfect sense for why NVIDIA would offer such a product:

According to the company, the TITAN RTX "will be available later this month in the U.S. and Europe for $2,499."