Please ensure Javascript is enabled for purposes of website accessibility
Log In Help Join The Motley Fool
Free Article Join Over 1 Million Premium Members And Get More In-Depth Stock Guidance and Research
By Ashraf Eassa - Oct 4, 2018 at 7:00AM

The RTX 2080 Ti isn't the best NVIDIA can do with its current chips.

Back in August, graphics giant NVIDIA (NVDA -1.50%) took the wraps off its latest graphics processing unit (GPU) architecture, known as Turing, and introduced three products based on that architecture: the RTX 2070, RTX 2080, and RTX 2080 Ti.

The RTX 2080 Ti is the fastest model in the lineup, and NVIDIA is charging a pretty penny for it. The company says that RTX 2080 Ti cards should start at $999, but NVIDIA's own Founders Edition model (it's a card incorporating the RTX 2080 Ti GPU that NVIDIA designed and sells directly) sells for $1199. (A quick look at popular online retailers shows that third-party RTX 2080 Ti cards are also selling for much more than $999.) 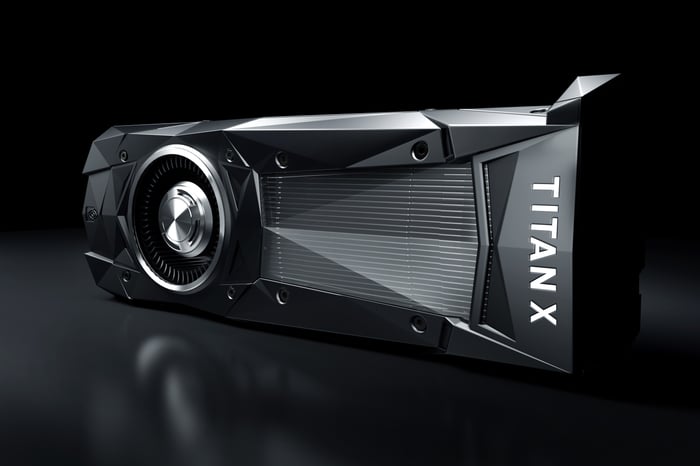 Although these prices might seem quite steep, NVIDIA could, using the very same chip technology that powers the RTX 2080 Ti, build an even faster and pricier card than the RTX 2080 Ti. Here's how.

There's still gas in the tank

The RTX 2080 Ti is based on a graphics processor that NVIDIA refers to as TU102. This is a beast of a chip that NVIDIA says has 18.6 billion transistors and has an area that measures 754 square millimeters. This is a huge chip.

NVIDIA also explains, in a white paper detailing its Turing architecture, that the TU102 chip is built with 4,608 CUDA cores, 72 RT cores, 576 tensor cores, 288 texture units, and 12 32-bit memory controllers. (Don't worry too much if these specs cause your eyes to glaze over.)

However, the RTX 2080 Ti doesn't have all of those things enabled. According to the white paper, it has the following enabled: 4,352 CUDA cores, 544 tensor cores, 272 texture units, and 11 32-bit memory controllers.

What this means, then, is that at some point down the line, NVIDIA could take fully enabled versions of that very same TU102 chip and introduce gaming-oriented cards based on it.

In fact, NVIDIA did just that during the Pascal product generation. In March of 2017, the company released a gaming-oriented graphics card, known as the GeForce GTX 1080 Ti, which was based on a partially disabled version of a chip called the GP102. Then, a month later, it released the Titan Xp, based on a fully enabled GP102 chip. (NVIDIA also charged $1200 for the Titan Xp, compared to $699 for the Founders Edition version of its GeForce GTX 1080 Ti.)

It's important to point out that NVIDIA has already announced graphics cards based on fully enabled versions of the TU102. The catch, though, is that these aren't targeted at gamers but, instead, at the professional visualization market. Those products are known as the Quadro RTX 6000 and the Quadro RTX 8000.

A fully enabled TU102 chip probably isn't easy to build, and I'd imagine that NVIDIA wants to be sure to build enough fully functional TU102 chips so that it can meet the demand for the very expensive Quadro RTX cards that are based on them. Over time, though, if NVIDIA finds that it's building more than enough fully functional TU102 chips to meet Quadro demand, then rolling out a new Titan card based on that chip for the gaming/prosumer market at a price north of the $1199 that it asks for the RTX 2080 Ti Founders Edition could be the right move.