Demand for quality healthcare products remains strong even during periods of economic stress. That's a great reason for investors to pay attention to the industry.

So which healthcare stocks do our experts have their eyes on right now? We asked a team of contributors to weigh in, and they called out LeMaitre Vascular (NASDAQ:LMAT), Illumina (NASDAQ:ILMN), and Ligand Pharmaceuticals (NASDAQ:LGND). 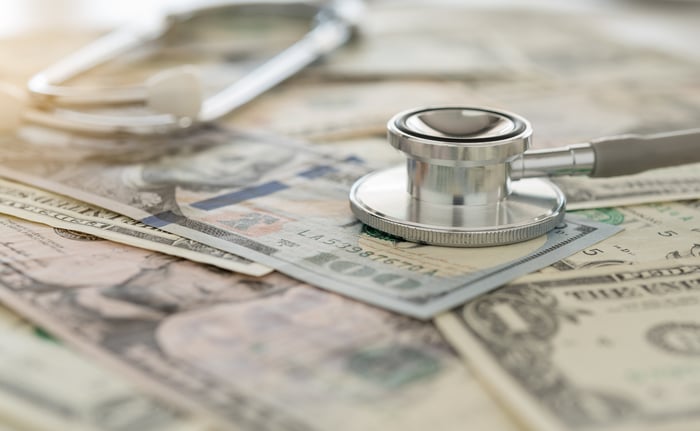 A long-term winner is trading on the cheap

Brian Feroldi (LeMaitre Vascular): 2018 is on pace to be a rough year for LeMaitre Vascular. The maker of niche products used during vascular surgery is down about 25%. A huge portion of the drawdown is attributable to management's decision to lower its guidance for the full year during its third-quarter earnings report. Understandably, that news didn't sit well with investors.

I'm not happy about the guidance cut, but I don't think it is the end of the world. Management's updated numbers still predict sales and EPS growth of 2% and 19%, respectively, for the full year. That's shy of the stated goal of 10% revenue growth and 20% profit growth, but at least the numbers are heading in the right direction.

Meanwhile, 2019 should be a year of continued expansion for LeMaitre, since it recently acquired two new businesses. The company spent a total of $16 million on the acquisitions, and it should be able to add at least $6 million in revenue to its top line next year. When adding in its usual price increases, the company is set up nicely to return to double-digit revenue growth in the year ahead.

When factoring in the expected growth and its recent share price drubbing, investors can buy into this winning business for only 23 times trailing earnings. That might not sound all that cheap, but it is actually the lowest valuation multiple that this company has had in years. Income investors will also love that this stock offers up a dividend yield of 1.1%.

Unlocking the power of DNA

Illumina's technology has been key in helping reduce the costs of mapping human genomes. The company estimates that more than 90% of all DNA sequencing ever performed has been accomplished using its systems. But it's the future rather than history that makes Illumina a top healthcare stock to buy right now.

Several factors should drive Illumina's success over the next decade. The company's NovaSeq platform holds the potential to drastically lower genome mapping costs, opening up sequencing to many more customers. The market for direct-to-consumer personal genomics products offered by companies including Ancestry, 23andMe, and Helix should continue to grow. More countries are undertaking large-scale population genomics efforts to map the DNA of hundreds of thousands of citizens. Perhaps the most exciting possibility for Illumina is that its technology could be used in analyzing DNA to detect all types of cancer at very early stages using simple blood tests.

I think Illumina will be a dominant player in unlocking the power of DNA for years to come. And I think that it will unlock a lot more value for shareholders well into the future, too.

Sean Williams (Ligand Pharmaceuticals): The stock market is in the midst of its largest correction in seven years, which means that bargains abound in the healthcare sector. Following a more than 50% haircut in its share price since the beginning of the fourth quarter, I believe now is the time to give Ligand Pharmaceuticals a closer look.

Ligand Pharmaceuticals isn't like your typical drug developer. Rather than developing therapies from start to finish, which tends to have a low success rate and can take upward of a decade, Ligand focuses its attention on developing early-stage compounds and acquiring intellectual property (IP) that it then licenses out to other drug developers. Although the IP being used by other drug developers isn't guaranteed to succeed in their respective studies, it gives Ligand plenty of opportunities to secure long-term royalty revenue and up-front milestone or contract revenue.

According to a November 2018 presentation from the company, it currently has IP being used by 178 compounds, 18 of which have been approved by the U.S. Food and Drug Administration (FDA). Mind you, this includes big pharma, biotech companies, specialty drugmakers, and generic-drug producers, so Ligand's opportunities for royalty revenue aren't limited. Nearly half of the company's 178 partnered programs are in preclinical studies, lending to plenty of down-the-road potential. Nevertheless, 25% are in phase 2 or phase 3 trials or being reviewed by the FDA for approval. This creates an opportunity for near-term and long-tail sales growth, atop the milestone and contract revenue it receives.

Perhaps best of all, the Ligand business model comes with very low costs. Since it's primarily acquiring IP and thriving off existing early-stage developments, the company's operating expenses are low -- so low, in fact, that margins can be as high as 96%. Don't let a stock market correction or fear of a recession scare you away from this well-run IP powerhouse.