Please ensure Javascript is enabled for purposes of website accessibility
Free Article Join Over 1 Million Premium Members And Get More In-Depth Stock Guidance and Research
By Keith Speights - Dec 23, 2018 at 9:01AM

Move aside, Nostradamus. There's a new prognosticator in town. Namely, me.

Rather than compose cryptic quatrains about mirky global events far in the future, I'll limit my predictions to one specific area -- marijuana stocks. And I'll make them crystal-ball clear so that they're easy to interpret. Finally, instead of peering into the distant future, my look ahead will focus solely on next year.

So without further ado, here are my seven bold and audacious predictions for marijuana stocks in 2019. 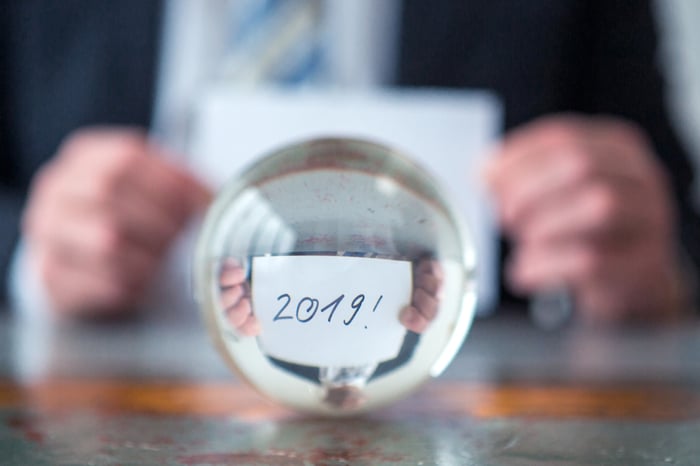 I predict that Sen. Cory Gardner (R-CO) and Sen. Elizabeth Warren (D-MA) will finally succeed in getting the "Strengthening the Tenth Amendment Through Entrusting States (STATES) Act" passed in the U.S. Senate. A similar bill will pass the House of Representatives, with President Trump quickly signing the legislation into law.

Marijuana stocks then soar so high that some established companies consider including the word "cannabis" in their names. Oh, and former U.S. Attorney General Jeff Sessions cries when interviewed on TV about the marijuana legalization news, spurring the biggest social media meme of the year.

2. At least three $1 billion-plus deals with one CEO eating his words

Canopy Growth ( CGC -4.05% ) had its $4 billion deal with Constellation Brands in 2018. Cronos Group ( CRON -5.83% ) had its $1.8 billion investment from Altria. Next year, I foresee at least three other deals of more than $1 billion between marijuana growers and companies operating outside of the cannabis industry.

Tilray ( TLRY ) might or might not be involved in one of these big deals. Either way, Tilray CEO Brendan Kennedy literally will eat his words by gobbling down a transcript of his 2018 interview with CNBC host Jim Cramer where he stated that the company didn't want to partner with Anheuser-Busch InBev -- it wanted to build another Anheuser-Busch InBev.

Oh, wait... Tilray just announced a partnership with (drum roll please) Anheuser-Busch. Maybe, instead, Kennedy will eat his latest words that Tilray wasn't interested in an investment from its new joint-venture partner.

Meanwhile, the U.S. hemp-based CBD-infused beverage market also takes off in a major way. Canopy Growth scrambles to enter the fast-growing market before the end of the year in advance of its highly anticipated Super Bowl commercial featuring the Rolling Stones singing a version of one of their biggest hits with revised lyrics, "I can get some satisfaction."

Despite some nattering negativism by skeptics, GW Pharmaceuticals' ( GWPH ) Epidiolex, the first plant-based cannabinoid drug approved in the U.S., becomes a smashing commercial success. Even pessimistic analysts project that Epidiolex likely will become a blockbuster within a few years.

As Epidiolex sales steadily increase, several renowned Big Pharma executives are forced to receive medical care for injuries received from slapping themselves on the foreheads in regret. These slaps stem from the executives reading the histories of their companies marketing cannabis-based drugs in the early 20th century.

5. At least one Canadian marijuana stock has zero dilution, prompting celebrations in the streets of major Canadian cities

After many major Canadian marijuana stocks diluted themselves to smithereens in 2018, the new year offers a much different scenario. At least one Canadian marijuana producer actually goes the entire year in 2019 without issuing a single new share.

The zero dilution at first stuns investors. However, once the shock wears off, they storm the streets of major Canadian cities in celebration.

6. Mexico contemplates building a wall to prevent an invasion of Canadian marijuana growers

Although the country will at first embrace the idea of Canadian marijuana producers flocking to set up shop in Mexico, some politicians won't be happy. A bill is introduced to build a wall along the Mexico-U.S. border to prevent more Canadian marijuana growers from heading south. The bill dies in committee, however, after it receives an official endorsement from U.S. President Donald Trump.

7. Noted short-seller issues update that it liked marijuana stocks all along, was just joking in previous negative attacks

Citron Research and its founder, Andrew Left, caused shares of Cronos Group to plummet in August 2018 with a report titled, Cronos: The Dark Side of the Cannabis Space. Cronos Group, by the way, ended 2018 as one of the best-performing marijuana stocks.

In 2019, my prognostication is that Citron does a complete about-face. It publishes a new online report that states that everything it has said in the past about marijuana stocks was really made in jest. Citron's report also says that estimates of a global marijuana market of $150 billion are off, with the actual number closer to $148 billion.

My predictions for marijuana stocks in 2019 were obviously made with tongue firmly implanted in cheek. However, there are some aspects of the predictions that I suspect actually will happen next year.

My hunch is that there's a relatively good chance that the STATES bill will pass, for example. While this legislation doesn't really legalize marijuana in the U.S., it would mean that the federal government wouldn't interfere in states that have legalized marijuana for either medical or recreational purposes.

I think there will be more big deals between companies operating outside of the cannabis industry and marijuana producers. The cannabis-infused beverage market likely will get off to a pretty good start in 2019. Epidiolex just might surprise some observers with its early sales momentum.

With its $4 billion cash infusion and revenue picking up, Canopy Growth may not dilute its stock further next year. Mexico could very well legalize recreational cannabis, attracting significant interest from the major Canadian marijuana producers. And while the Citron Research prediction won't be fulfilled, growth in the global cannabis industry could cause the short-seller to set its sights on stocks in other industries.

Here's one more serious prediction as a bonus. Four marijuana stocks were mentioned in my whimsical predictions -- Canopy Growth, Cronos Group, GW Pharmaceuticals, and Tilray. I predict that the biggest marijuana stock winner in 2019 will more than quadruple and will be... none of the above.