Please ensure Javascript is enabled for purposes of website accessibility
Free Article Join Over 1 Million Premium Members And Get More In-Depth Stock Guidance and Research
By Joe Tenebruso - Dec 23, 2018 at 11:54AM

Pitting the burger titan against the burrito giant to see which is the best choice for your portfolio.

McDonald's ( MCD 1.89% ) and Chipotle Mexican Grill ( CMG 0.58% ) are two of the most successful restaurant concepts in the world. But which stock is the better investment today?

McDonald's has long positioned itself as a provider of quick, inexpensive, and convenient meals. The fast-food colossus' massive global store base gives it a scale advantage few rivals can match. In turn, McDonald's is a low-cost supplier in an industry in which price matters a great deal.

Chipotle, on the other hand, attempts to differentiate itself with quality. While speed and value are still important in the fast-casual space, Chipotle has proven that consumers will pay more and wait a bit longer for a higher-quality meal. 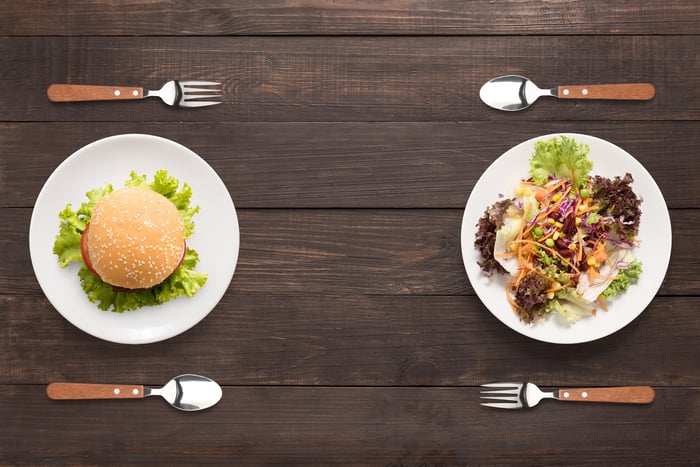 With much of its store base already built out, McDonald's has turned its attention toward modernizing and upgrading its restaurants. The company is also in the process of refranchising its stores; with more than 90% of its stores owned by franchisees, McDonald's is now a much more asset-light business. In turn, it's highly profitable, with operating margins of more than 40%, thanks to its royalty- and rent-based income streams.

Conversely, Chipotle owns and operates its restaurants. This gives it more control over operations and growth investments, albeit with greater capital requirements, and, therefore, higher overall risk.

All told, while both restaurant chains have proven business models, McDonald's franchise-based approach makes it a steadier and less risky investment. That gives it the edge here.

Let's now take a look at some key financial metrics.

McDonald's is certainly the more heavily indebted retailer, with $29 billion in net debt compared to $670 million in net cash for Chipotle. Yet McDonald's also generates 25 times as much operating profit and more than 10 times as much free cash flow as its smaller rival. McDonald's tremendous cash flow production allows it to easily service its debt while still rewarding shareholders with stock buybacks and a rising dividend stream. It could also pay down its debt load over time if it chose to. As such, McDonald's has the edge for financial strength.

McDonald's may be more financially powerful, but Chipotle is growing much faster. Wall Street estimates that the burrito slinger will increase its earnings per share by more than 27% annually over the next half-decade. Chipotle's store count expansion, combined with its mobile ordering and delivery initiatives, are expected to help fuel these gains. Meanwhile, McDonald's profits are projected to rise by about 9% annually, driven by the burger chain's delivery rollout, store modernization plan, and share repurchases. Thus, Chipotle has a clear edge in terms of expected growth in the coming years.

All three metrics suggest the same thing: McDonald's stock is less expensive than Chipotle stock. At current prices, McDonald's shares are about 4% cheaper per dollar of free cash flow, and almost 40% cheaper per dollar of projected earnings for the year ahead. Even if we account for McDonald's drastically higher debt load, as we do with the enterprise value-to-EBITDA ratio, the burger giant's stock is still the better deal.