This year has been a rocky one for investors. Stocks surged for much of the year, riding the momentum created by tax reform and a strong economy to hit record highs. But over the past few months, concerns about rising interest rates, trade tensions with China, and a slowdown in the housing market have been some of the factors that pushed stocks into a correction, and major indexes are now down for the year.

There have been some big-name losers, including General Electric, which unraveled amid weakness in its power division and as the conglomerate's mistakes under former CEO Jeff Immelt have been exposed; and Facebook, whose 2018 has been a series of public relations nightmares.

But more than a few companies made surprising turnarounds in 2018. Below are six of the biggest comebacks in business this year. 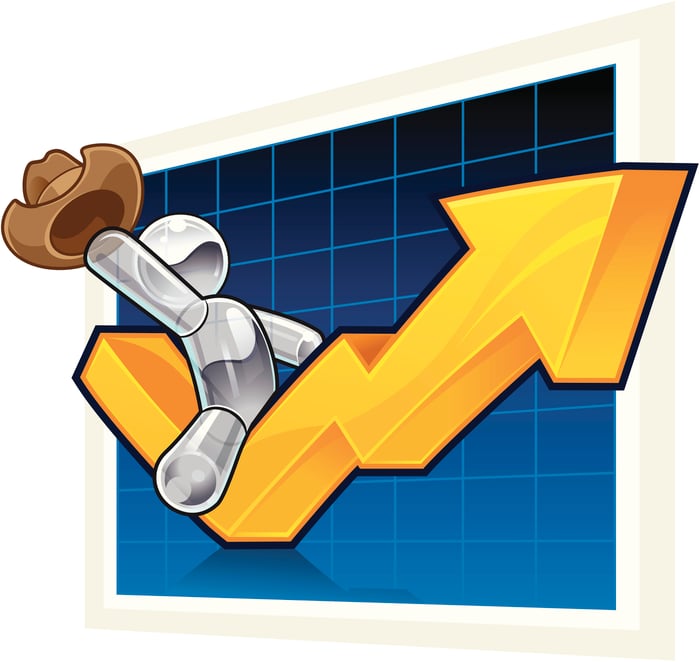 The ridesharing service had a disastrous 2017. Uber suffered a backlash after it was believed to have promoted strike-breaking during a taxi protest at Kennedy Airport in reaction to the Muslim travel ban. The #DeleteUber campaign that resulted damaged the company's brand and allowed rival Lyft to scoop up significant market share. That was followed by allegations of rampant sexual harassment and, ultimately, the resignation of founder and CEO Travis Kalanick.

But the company has turned things around in 2018 under new CEO Dara Khosrowshahi. It made nice with regulators, allowing it to restart its service in London and launch a new UberX service in Barcelona. It settled a lawsuit with Alphabet and retreated from Southeast Asia and Russia, taking stakes in incumbents in those two markets in exchange.

Those moves, along with the change in management and corporate culture, seem to have improved Uber's brand all around -- and put the company in a position for a lucrative initial public offering next year that could value it at as much as $120 billion, though that looks seriously inflated.

After years of serving investors a series of disappointments, Twitter (NYSE:TWTR) has finally emerged as a profitable company. Year to date, Twitter's stock is up 37%, having nearly doubled at one point in 2018.

Though the number of monthly users has fallen, daily user growth has been strong, up double digits and showing that engagement with the social media site is improving. Twitter has reported four straight quarters of GAAP profitability. And it has shown off strong revenue growth as the company improves its ability to deliver value for advertisers, in part by leveraging video ads. The service also seems to be benefiting from an active news environment and the continuing embrace from President Trump and others, who use the platform to connect with the broader public.

Twitter may still have issues with safety and abuse on the platform, but the company has taken steps to mitigate those concerns. The market expects its growth to continue in 2019.

Elon Musk always attracts a lot of attention, but in the middle of the year, Tesla (NASDAQ:TSLA) and its CEO seemed to be imploding. In the midst of Model 3 "production hell," Musk flipped out at analysts on an earnings call, dismissing them as boneheaded and boring. He later incurred the wrath of the Securities and Exchange Commission by tweeting that funding to take his company private had been secured at $420 a share when it had not been. In another sign of arguably bad judgment, Musk smoked marijuana during a three-hour podcast interview.

Though Tesla was in dire straits earlier in the year as it burned through cash, the company emerged from the drama brought on by Musk and its production challenges, profitable and with a bright future. Tesla crushed expectations in its third-quarter earnings report, posting a surprise profit with nearly $1 billion in free cash flow, as vehicle deliveries tripled both sequentially and from the prior-year quarter. Revenue more than doubled from a year ago.

Tesla expects another solid performance in the fourth quarter, and with demand for the Model 3 still strong, 2019 should see another round of impressive growth.

Coming into 2018, Chipotle Mexican Grill (NYSE:CMG) was looking to put a rough two-year patch behind it. The fast-casual restaurant chain was hopeful that new CEO Brian Niccol could start a new chapter in the company's history, putting memories of the E. coli crisis behind it and restoring investor confidence.

Niccol cleaned house in the C-suite, brought in a slew of new executives, and moved the company headquarters from Denver to his hometown of Newport Beach, Calif. With experience as the former head of Taco Bell, Niccol focused on marketing, launching a national ad campaign touting the company's real ingredients, as well as other promotions.

Though the company may never return to the double-digit comparable-store sales growth it saw as recently as 2014, Chipotle is taking measurable steps in the right direction, and investors have rewarded it. The stock is up roughly 40% this year, even amid the market's broader sell-off.

Travel-recommendation engine TripAdvisor (NASDAQ:TRIP) also came into this year looking to put struggles behind it. A disappointing launch of its Instant Booking platform and lower monetization rates from mobile, as opposed to desktop, had previously wiped nearly 75% off its stock price.

But it began to turn things around this year as a new focus on experiences -- think amusements and restaurants -- have started to pay off while diversifying revenue away from its core hotel segment. The company also scaled back on marketing expenses, its biggest expense item, which helped profits double in its most recent quarter. That encouraged investors that the company may have overcome its toughest struggles, especially as growth in its nonhotel segment is now ready to pick up the slack from the hotel business.

So far this year, the stock is up 53% as investor confidence in the company's ability to grow profits has returned, and management sees that momentum continuing into the new year.

At the end of 2017, talk of the "retail apocalypse" was common as many traditional retailers closed thousands of stores. However, while Sears and Toys R Us have gone bankrupt, plenty of other big-box chains are thriving, benefiting from a strong consumer economy, smart investments, and the corporate tax cut that came with tax reform.

Retail heavyweights like Walmart (NYSE:WMT) and Target (NYSE:TGT) have put up some of their best comps and traffic growth in a decade. Costco (NASDAQ:COST) just finished a fiscal year with U.S. comps up 7.4%, and Best Buy (NYSE:BBY) continues to deliver solid growth, despite concerns that Amazon.com would put it out of business.

Retail stocks have broadly fallen in recent months in tandem with the rest of the market, hurting what had been a strong year, but Black Friday weekend brought in another round of record sales, indicating a promising holiday season. Despite the stock sell-off, performance in the industry remains strong.