But Google is still gaining ground.

Amazon ( AMZN -1.38% ) created a new market when it launched the first Echo smart speaker in 2014. That first-mover advantage, its tight integration into Amazon's e-commerce and cloud ecosystems, and aggressive promotions made it the top smart speaker brand in America in 2018.

A recent eMarketer report estimates that Amazon will maintain that lead by a wide margin next year, but other rivals -- most notably Alphabet's ( GOOG -0.87% ) ( GOOGL -0.68% ) Google -- could gain ground at its expense. 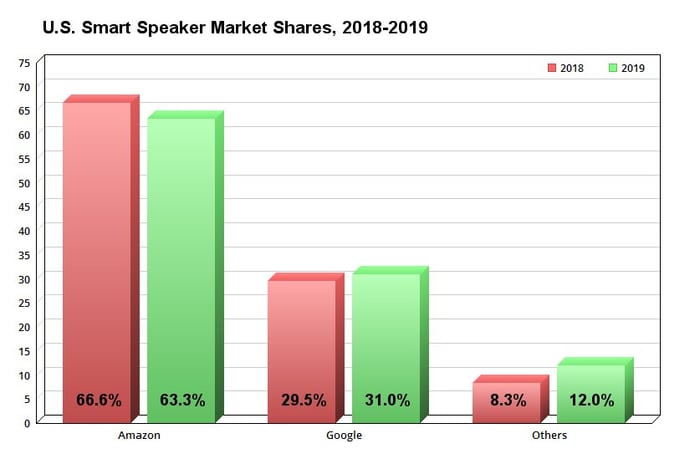 Google is leveraging its market-leading position in online search to sell its Home speakers. Like Amazon, Google sells different versions of its speaker across a wide range of price tiers. The cheapest version costs $50, while the Home Hub -- which competes against Amazon's pricier Echo Show -- costs $150. Amazon and Google are also both integrating the speakers' Alexa and Assistant platforms, respectively, into third-party devices.

Amazon and Google's duopoly in the U.S. smart speaker market could make it tough for other challengers -- like Apple's much pricier HomePod and Facebook's poorly timed Portal -- to gain traction. It also indicates that Amazon's and Google's speakers could dominate the budding smart home market as central control hubs.