Facebook (NASDAQ:FB) recently introduced its Portal smart speakers, which sport screens and cameras like Amazon's (NASDAQ:AMZN) Echo Show. Facebook will launch two versions of the Portal: the $199 Portal, which has a 10" screen, and the $349 Portal+, which has a 15.6" screen. Facebook is currently taking pre-orders for both speakers and plans to ship the devices next month.

The Portal speakers aren't equipped with Facebook's own virtual assistant services, which burned out with the cancellation of M earlier this year. Instead, they'll use Amazon's Alexa service to call Facebook contacts and launch services like Facebook Messenger, Facebook Watch, Amazon Music, Spotify, and Pandora. 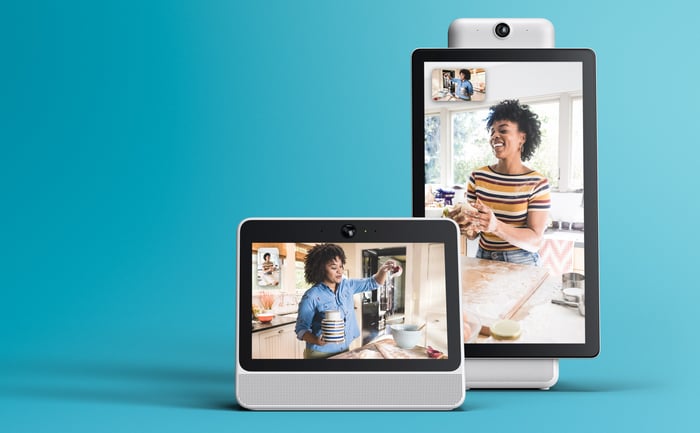 Late to the party...

Facebook's entrance into this market isn't surprising, but the Portal speakers will face a tough uphill battle against Amazon, Google, and other companies. Amazon controlled 41% of the global smart speaker market during the second quarter, according to Strategy Analytics. Google ranked second with a 28% share, followed by Alibaba and Apple, which controlled 7% and 6% of the market, respectively.

Amazon and Google both dominate the market with very cheap speakers: Amazon's Echo Dot and Google's Home Mini both cost $50. Both companies have attracted a growing list of developers and companies that are making the smart speakers more useful with new "skills".

Amazon and Google both leverage the strength of their ecosystems to sell smart speakers. Echo users can place orders from Amazon's online marketplace and stream media from Amazon's services, while Home users can pull data from Google's wide range of services. 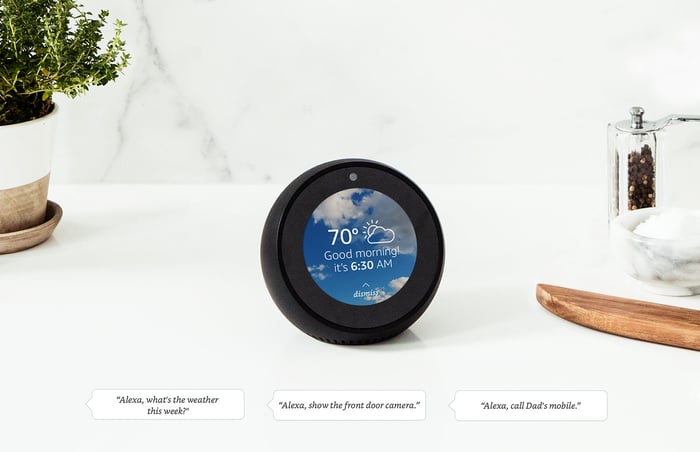 But here's the problem for Facebook: Its Portal speakers are pricier than Amazon and Google's low-end products, and its ecosystem is arguably weaker than Amazon's e-commerce backbone and Google's services. The 10" Portal's $199 price tag is lower than the $230 price tag for Amazon's second-generation Echo Show, but customers can still buy the smaller Echo Spot (which has a smaller circular screen) for $130.

Google also partnered with Lenovo to launch the Show-like Lenovo Smart Displays earlier this year. The 8" version cost $200, and the 10" version cost $250. Google also just launched the Home Hub, a similar first-party device with a 7" screen which only costs $149.  Meanwhile, higher-end customers who prefer Apple hardware will probably buy the $349 HomePod as their default smart speaker.

Therefore the only real reason to buy a Facebook Portal instead of another speaker would be to add another display for Facebook and Messenger to your home -- which seems unnecessary since the apps can be easily accessed on smartphones and other devices. It's also a poorly timed and tone-deaf strategy: Many consumers are probably still wary of Facebook after the Cambridge Analytica scandal and the recent data breach, which affected up to 50 million accounts.

There's no real logic behind Facebook's introduction of the Portal speakers. It probably only launched them because it was afraid of being left out of the smart speaker market, which could grow from $6.7 billion to $23.5 billion between 2018 and 2023 according to Strategy Analytics. If Amazon and Google monopolize that market, Facebook would also be left behind in voice searches -- which could become essential for a myriad of tasks.

Yet Facebook's decision to use Alexa instead of its own virtual assistant was perplexing, since it could just tether more users to Amazon's ecosystem. Lastly, Facebook's decision to block popular services like YouTube and Netflix from the platform could be a deal-breaker for many customers. Google's Home Hub, by comparison, heavily promotes YouTube services but blocks Netflix, Amazon Prime Video, and Hulu.

Therefore, I expect Facebook's Portal speakers to suffer the same fate as HTC's "Facebook Phone" and its "Facebook Home" Android launcher. Like those failures, the Portal seems like another desperate bid to expand Facebook's ecosystem without properly taking the market's temperature.