Investors have had to endure a slow-motion crash in the stock market during December. Fears about future economic growth, interest rates, trade, and geopolitical upheaval have all contributed to sending the S&P 500 toward its worst monthly performance ever in terms of points. Even when you look at the percentage decline, it's the biggest downturn for the index in nearly 10 years. That has many investors who have never before seen a drop in the stock market this large scrambling for the exits.

Declines are all part of the long-term track of the market, and investors with long time horizons have been able to generate impressive returns even when they've held through tough times like this. When you look at when we've seen drops this large before, you'll see a pattern emerge as to what happens next. 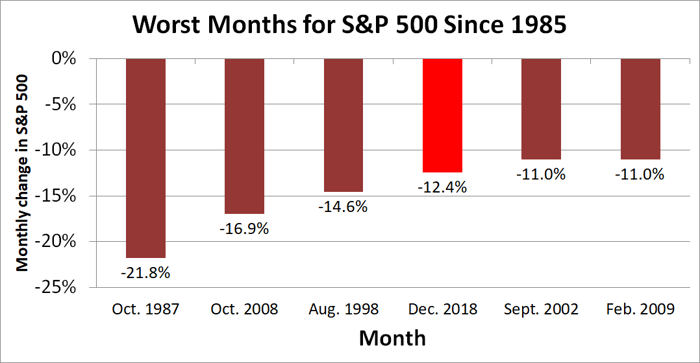 In nearly all of these cases, the big downturns were followed by equally impressive rebounds. The 1987 crash seemed cataclysmic at the time, but it took less than two years for markets to hit new highs. August 1998's drop was linked to an international financial and currency crisis in Russia that proved short-lived, and within a few months, stocks continued to soar through the remainder of the bull market of the 1990s. The decline in September 2002 proved to be the low point of the bear market of 2000 to 2002, which was followed by a large bull market from 2003 to 2007.

Only in the financial crisis in 2008 and 2009 did investors have to endure a double helping of losses. October 2008's drop proved to be only the opening stanza of a relatively drawn-out decline, but February 2009's 11% hit took the S&P to what proved to be its lowest closing level on a monthly basis -- setting the stage for a decade-long rally in which the stock market index more than quadrupled.

It's reasonable to be scared of a big down month like this one. But history shows that more often than not, drops of this magnitude have been great opportunities for investors.