T-Mobile (NASDAQ:TMUS) has hit the pause button on its plans to launch a television service. Since acquiring Layer3 TV late last year, T-Mobile has said it intends to launch its own nationwide service in 2018, but Bloomberg reports the company has had to delay the debut of its service after running into complexities.

T-Mobile wants to launch a service that's not just the same old product delivered in a new way. But it's proving more difficult than anticipated. There's lots of room to improve in the pay-TV industry, but is T-Mobile the right company to do it? 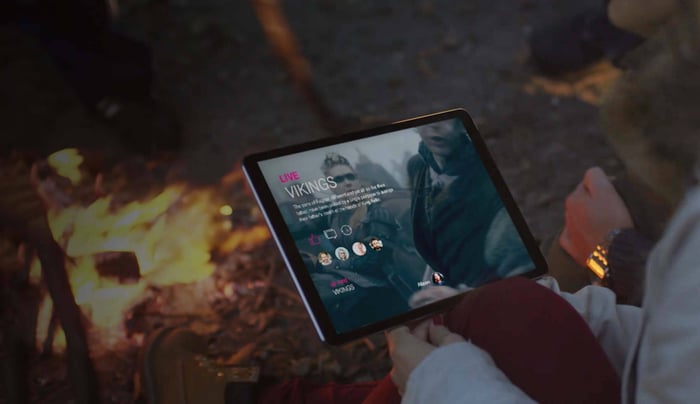 TV for the 5G era

During the company's third-quarter earnings call, T-Mobile President Mike Sievert gave some hints of what T-Mobile has planned for its TV service.

"A TV service that is free from having to have wires, that has hundreds of high-definition choices coming in wirelessly, that's free from a particular cable box, that puts you in control, that's met your smartphone, that's connected to your social, digital, and mobile life in a way that TV has never been before as an island," Sievert said.

Those comments suggest T-Mobile wants to improve consumer choice and lean on its strength in mobility. Giving customers the option to choose how they watch TV is relatively easy. T-Mobile just has to build software that sits on top of various platforms to deliver streaming video. All the major virtual pay-TV providers offer consumer choice in how they stream.

The bigger challenge is enabling customers to stream live content wherever they want -- i.e., when they're out and about and using their T-Mobile-connected smartphone. Digital mobile streaming rights for live content, particularly sports, is a big, expensive, jumbled mess. Sports leagues have portioned out different rights to different parties, with the result that some content becomes unavailable on services such as YouTube TV or Hulu Live when customers try to stream on their mobile devices outside their home.

That's exactly the kind of user experience T-Mobile wants to avoid, especially since its business is so focused on mobility. Sievert noted that T-Mobile's journey in television will start with a service focused on access in the home before expanding to mobile.

1 thing T-Mobile can really bring to the table

Offering a television service that just works no matter what device you're using or how you connect to the internet isn't something T-Mobile is necessarily better positioned to offer than a company like YouTube or Hulu.

But when it comes down to it, the primary differentiator between television service providers is the level of service and how they treat their customers.

T-Mobile may be able to use Layer3's streaming technology to provide better uptime and higher-quality streams. Many of the competitors have suffered notable outages during big events when traffic increases. Better technology may provide a better viewing experience.

Moreover, T-Mobile can bring the same level of customer focus to the television industry as it did to the wireless industry. It can offer greater pricing transparency -- something the cable industry is even worse about than wireless. It can offer better customer service, a major area of focus for the company recently. And it can offer greater integration with video services consumers already subscribe to, a feature most competitors have shunned.

Bringing a greater level of customer focus to the industry will ultimately be the disrupting force of T-Mobile's television service. It's worked for the company in mobile, so why not in television?