CarMax (NYSE:KMX) investors have been waiting for a strong signal that the retailer's growth pace is on the mend. The used-car specialist's sales dropped in early 2018, after all, and only just fought back into modestly positive territory.

In its third-quarter earnings report this week, the company again posted core sales figures that described growth struggles at existing locations, even as CarMax wins more business online and from its expanding store footprint.

CarMax's sales volumes were weak thanks to the combination of falling customer traffic and the comparison with a prior-year period that was lifted by a post-hurricane sales spike. The company still managed healthy overall sales and profit growth as areas like finance and wholesale automobile sales picked up the slack. 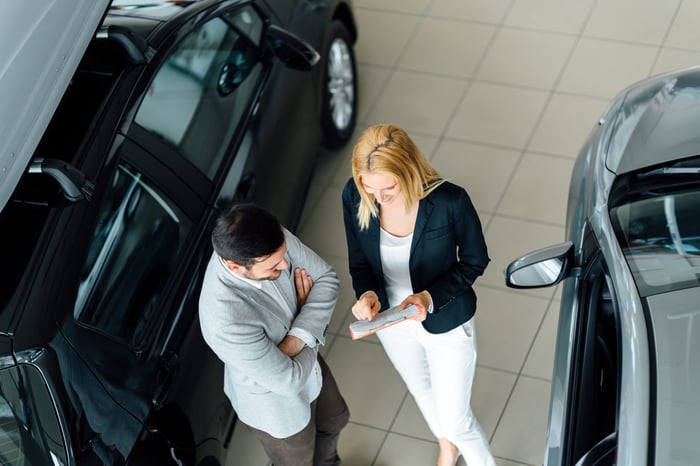 Executives chose to highlight CarMax's profit successes in the period. "We are pleased to report solid growth in both pre-tax earnings and earnings per share," CEO Bill Nash said in a press release, "despite having soft comparable store used unit sales this quarter." Management argued that this success was "a testament to the strength of our diversified business model."

Nash and his team said that the step back into negative comps was mainly driven by unusual results from six stores in and around Houston, Texas, that experienced hurricane-fueled sales spikes a year ago. "Excluding these stores from the calculation," they explained, "our comparable-store used unit sales would have grown by 2.3%" rather than declining by 1.2%."

CarMax is still on track to open stores at an annual pace of 15, adding a bit less than 10% to its current store base of 200 locations spread out across 41 states. Executives are hoping to use that deep footprint as a key selling point as the car-buying process moves online. While peers might offer complete e-commerce sales options or full-service in-person shopping, CarMax is uniquely positioned to provide customers with a tailored mix of those two experiences that can match up with each customer's shopping preferences.