Please ensure Javascript is enabled for purposes of website accessibility
Free Article Join Over 1 Million Premium Members And Get More In-Depth Stock Guidance and Research
By Rich Duprey, Anders Bylund, and John Bromels - Dec 24, 2018 at 10:50AM

Following the big money into Atlassian, Berkshire Hathaway, and Dollar Tree just might be a smart move.

The so-called "smart money" isn't always smart, and the small retail investor can often do better than the big guys because we have room for more flexibility in our decisions. But that doesn't mean we should completely ignore where Wall Street is putting its money, either. They are considered smart for a reason. 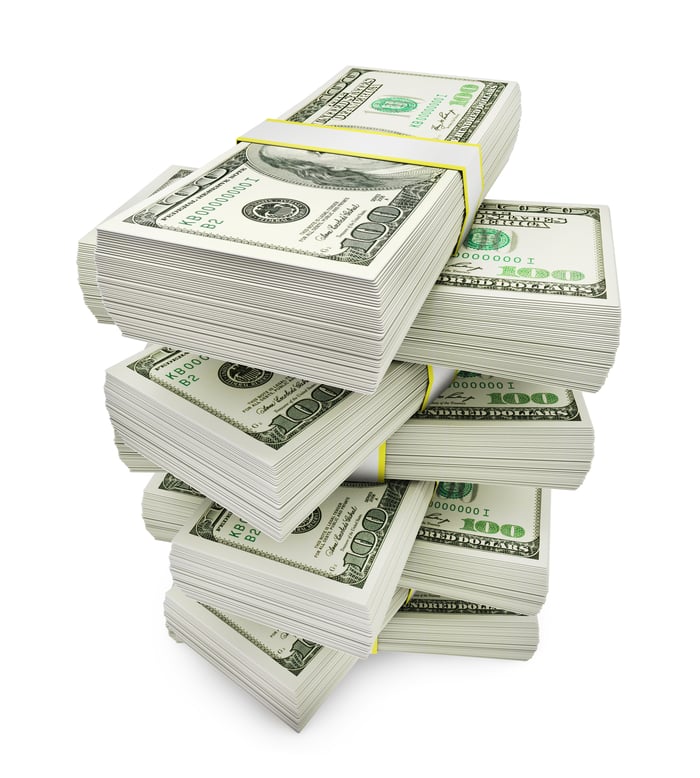 The maker of cloud-based project management software and services saw 72 financial institutions starting new Atlassian positions in the third quarter while only 23 fund managers closed out their holdings in the stock. Thirteen of the new stakes came from hedge funds, versus just five ended holdings in that category.

And the pros aren't shy about sharing their love for this stock. Following Atlassian's fantastic first-quarter report in October, at least four analyst firms issued bullish reviews of the stock. Their price targets ranged from $89 to $100 per share, indicating gains of at least 9% and up to 23% over the next year or so. That's on top of a 81% gain over the last 52 weeks.

Atlassian isn't profitable in the classical sense, but the company kept 35% of its trailing revenue in the form of operating cash flows and top-line sales are growing at an aggregate 40% per year from a three-year perspective. That's some serious growth-stock material -- and what's so unique about this company is that Atlassian gets it all done through word-of-mouth advertising. The sales and marketing budget stops at just 44% of annual operating expenses, in an industry where many companies devote 80% of their operating costs to marketing and even 60% is a penny-pinching ad budget.

That recent surge of stock upgrade often cited an attractive valuation, along with celebrating Atlassian's lean-and-mean business model. Some also noted that enterprise software vendors have seen plenty of buyout action in recent months and Atlassian could be next on that list.

We Fools don't always agree with Wall Street's actions and opinions, but Atlassian appears to be popular on the Street these days for all the right reasons.

John Bromels (Berkshire Hathaway): No, this isn't a cop-out. Yes, we all know that master investor Warren Buffett is one of the smartest people on Wall Street (despite residing halfway across the country in Omaha), and that much of his wealth comes from the shares he owns of his Berkshire Hathaway. But lately, he's not the only one.

A lot of Wall Street bigwigs have gotten interested in Berkshire recently. For example, Bill Gates, who has a big portion of his foundation's money in Berkshire stock through the Bill and Melinda Gates Foundation Trust, started buying Berkshire again in the third quarter after selling shares for the previous three quarters.

Of course, Gates is a longtime Berkshire shareholder -- not to mention a close personal friend of Buffett -- so perhaps his purchase isn't so surprising. But other Wall Street heavyweights initiated new positions in Berkshire in Q3, including Bruce Berkowitz of Fairholme Capital Management, who bought 9,600 shares. Still others made big increases to their existing Berkshire positions last quarter: Yacktman Asset Management, which has $8.4 billion under management, upped its stake in Berkshire by 21.2%, and legendary investor Joel Greenblatt backed up the truck for his Gotham Asset Management portfolio, increasing its position in Berkshire by an astonishing 89.8%, to 121,200 shares.

Why all the sudden interest in Berkshire (well, besides that it's an incredibly well-run company that churns out mountains of cash and deploys it effectively)? It's possible that in a time of high market volatility, managers are trying to introduce some stability into their portfolios, and Berkshire is certainly a stable company. Also, insurance -- Berkshire's core business -- is generally regarded as "recession-proof," which may be attractive to investors who fear the longest bull market in history is coming to an end.

Regardless of their reasons, it's clear the smart Wall Street money is currently (as usual) betting on Buffett.

Rich Duprey (Dollar Tree): Chuck Akre looks for "compounding machines" that satisfy the three-legged stool approach to his value investing philosophy at Akre Capital Management. He looks for businesses that produce long-lasting, predictable returns on equity and free cash flow; have excellent management teams; and reinvest their FCF in a disciplined fashion, whether it is organically in the business or through acquisitions.

One of its latest purchases is beaten-down deep discounter Dollar Tree,which has been weighed down by its purchase in 2015 of Family Dollar. It took a highly successful business model that relied upon a simple premise -- everything in the store costs $1 -- and brought in a highly dysfunctional discount chain where most things cost $1 but could also run much more than that.

Although Dollar General operates on the same premise, Family Dollar was consistently the laggard in terms of sales growth and profit margins. Instead of fixing Family Dollar, Dollar Tree broke its own success and billionaire activist investor Carl Icahn has now taken an interest in the business to see if he can turn it around, a bet Akre seemingly believes he can. The even-money bet is that Icahn will try to undo the Family Dollar acquisition, though the billionaire himself has not indicated what, if any, plans he has for his investment.

For all its faults, Dollar Tree still produces copious amounts of free cash flow, some $1.16 billion worth on a trailing basis, up from $1.11 billion in 2017. That gives the company a lot of leeway in how it can repair itself. And yet with an enterprise value trading at about 20 times the free cash flow it produces, it's not exactly a bargain-basement stock even if its shares are down 22% year to date.

However, there remains plenty of potential in Dollar Tree and sufficient opportunity to unlock additional value that's hidden within.

Why Atlassian Finished August Up 13%