Please ensure Javascript is enabled for purposes of website accessibility
Log In Help Join The Motley Fool
Free Article Join Over 1 Million Premium Members And Get More In-Depth Stock Guidance and Research
By Ashraf Eassa - Dec 27, 2018 at 8:30AM

These two smartphone makers' unit-shipment trajectories appear to be diverging.

Apple (AAPL 0.51%) surprised investors back in November when CFO Luca Maestri announced that the company would no longer be disclosing unit-shipment data for its products after dutifully doing so for years. Maestri's explanation was that "the number of units sold in any 90-day period is not necessarily representative of the underlying strength of the business," and that "a unit of sale is less relevant for [Apple] today than it was in the past, given the breadth of our portfolio and the wider sales dispersion within any given product line."

Later during the call, Maestri added that "our top competitors in smartphones, in tablets, in computers, do not provide quarterly unit sales information, either." 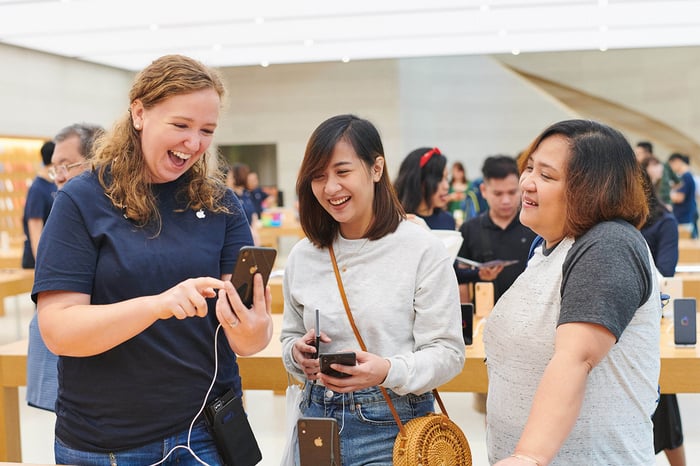 While that last bit of information is technically true, one of Apple's fiercest competitors in smartphones, Huawei, just announced that it had shipped north of 200 million smartphones over the course of 2018. It's common for companies to highlight data points that make them look good while trying to downplay (or in Apple's case, stop disclosing entirely) metrics that aren't as positive.

At the rate things are going, Huawei could overtake Apple by smartphone-shipment volume in 2019.

According to respected analyst Ming-Chi Kuo with TF International Securities (via MacRumors), Apple is set to see iPhone shipments reach between 205 million and 210 million in calendar year 2018. The analyst also doesn't seem to think the unit-shipment situation will improve next year as he forecasts Apple will ship between 188 million and 194 million iPhone units in calendar 2019.

If Kuo's right -- and to be clear, this is just an analyst estimate -- then that's not going to be great for Apple, which saw nearly 63% of its fiscal 2018 revenue come from the iPhone. By contrast, Huawei just cracked the 200 million unit-shipment mark, and if it can stay above that level next year and if Apple's iPhone unit shipments decline as Kuo predicts, then Huawei should displace Apple as the second-place smartphone maker by units.

Even if Huawei were to knock Apple down to third place next year in terms of unit shipments, Apple still likely would have a comfortable lead over its Chinese rival in terms of smartphone revenue and profit share. Remember that Huawei participates in a very broad set of smartphone price points, from entry-level to premium models. Apple, on the other hand, only sells premium-priced devices.

For some perspective, Apple's cheapest iPhone -- the iPhone 7 -- starts at $449 for the version with 32GB of RAM. The company's iPhone average selling price in its fiscal 2018 -- a figure that, again, investors and analysts won't be able to precisely derive going forward -- was almost an eye-popping $765. Huawei's smartphone average selling price is certainly far lower.

Early in the year, Huawei reportedly said that its revenue goal for the year was $102.2 billion. Diving a little deeper, the company also reportedly set a goal of $45 billion in sales from its Consumer Business Group, which likely generates the bulk of its revenue from smartphone sales.

For some perspective, Apple generated nearly $167 billion in revenue from iPhone sales during its fiscal 2018.