Though its stock has lost one-third of its value year to date in 2018, Steelcase Inc. (NYSE:SCS), an office furniture and workplace accessories manufacturer, is exhibiting earnings resilience that may hint at a more rewarding 2019. Below, let's analyze three comments made by management during the company's fiscal third-quarter 2019 earnings conference call that build a case for improved financial and stock performance in calendar 2019.

We are now approaching a point where our price increases earlier this year are offsetting the rate of inflation, so we don't expect to see additional erosion. As time goes by, we intend to recapture our lost margin to normal price increases and improved productivity.
-- CEO James Keane

As I discussed in my overview of Steelcase's third-quarter report, the company offset a drop in gross margin through control of operating expenses during the period. While gross margin dipped by 1.6%, mostly due to a one-time charge against the company's pension liabilities, operating margin improved by 0.3%. The productivity initiatives CEO James Keane alludes to above are helping to protect overall company profitability, despite a rise in commodity inputs, which have been adversely affected by import tariffs.

Increasing list prices on project furniture has helped the company absorb input inflation and it's offset escalating freight-transportation costs due to tight capacity in the trucking market. The impact of firmer pricing would have been more evident in third-quarter results had the company not incurred the pension charge, which totaled $11.2 million and shaved 1.2 percentage points off quarterly net income.

A fast pace of orders in a key market

Overall, we feel very good about the third quarter order patterns in the Americas, as they outpaced our expectations from the beginning of the quarter and have remained strong through the first three weeks of the fourth quarter. In addition, based on the most recent information from BIFMA [Business and Institutional Furniture Manufacturers Association], our order growth over the trailing six months ended in October has outpaced the industry.
-- CFO Dave Sylvester

With $638.6 million in third-quarter revenue, Steelcase's Americas segment is roughly 3.75 times larger than its next-largest segment, EMEA (Europe, Middle East, and Africa). Orders in the Americas advanced by 14% year over year during the last three months, absorbing a 6% decline in EMEA orders and helping total company order expansion exceed the prior year by 12%.

A moderately growing U.S. economy figures as a principal factor behind robust order flow in the segment, which includes the U.S., Canada, Latin America, and the Caribbean). Yet as with competitor Herman Miller, product innovation and repurposing also is pacing order flow. Management cited 4% year-over-year growth in the company's refreshed legacy furnishings portfolio during the quarter as an example of demand generated from new innovation.

It's worth noting that heightened demand has benefited Steelcase's pricing strategy, helping management to deliver its promised absorption of rising materials and transportation costs as discussed above. 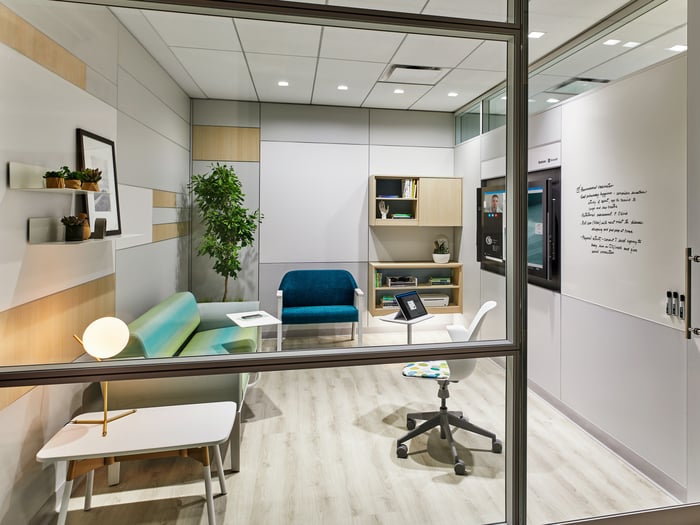 Within Steelcase's earnings conference call, the comments from CEO Keane above were perhaps the most cogent in explaining an increasingly favorable outlook for the company. As the nature of work in professional offices shifts toward flexible spaces that can be reconfigured on the fly to either induce collaboration or provide privacy, manufacturers like Steelcase, which specialize in such furnishings, stand to win significant project business.

Steelcase has embraced this evolution through internal innovation and acquisitions like its $79 million September 2018 purchase of U.K.-based Orangebox. The company describes Orangebox as a designer of "high-performance alternatives to traditional seating, patented architectural pods for visual and acoustical privacy solutions, and highly productive collaboration settings."

A deep expertise in multi-purposed environments will not only enhance sales in developed markets like the U.S. and Europe but should also gradually increase Steelcase's profitability, due to the higher margins associated with furniture and architectural elements designed for the flexible workplace.