This office furniture maker isn't a famous dividend stock, but it should be.

Income investors and dividend fanatics ignore Steelcase at their peril. Here's why. 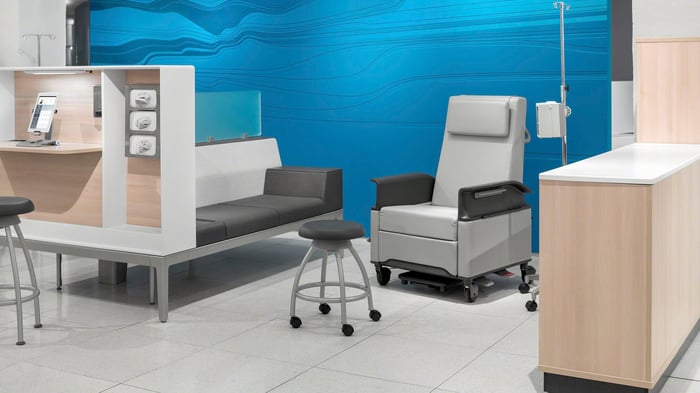 The case for Steelcase

Steelcase is the world's top purveyor of office furniture. Thanks in no small part to the size of this segment, the company takes in plenty of money (consistently booking more than $3 billion in revenue over the past four fiscal years). Steelcase is significantly larger in terms of sales than peer office and home furniture makers like HNI (HNI 1.74%), Knoll (KNL), and Herman Miller (MLKN 3.55%).

With the tailwind of a strong, sustained economy -- plus the occasional strategic acquisition like that of Orangebox -- Steelcase's top line is well above its level during the Great Recession. That $3-billion-plus is 33% higher than its revenue in its recession-hit 2010 fiscal year. The company's recent quarters, particularly the strong third quarter of the current fiscal year, have shown impressive growth on both the top and bottom lines.

And it likes to share its gains. After that tough 2010 (in which the company cut its regular dividend), its generally improving bottom line and free cash flow (FCF) gave room for a set of increases to the payout. These have occurred more or less regularly since then, with the distribution more than tripling to the current level of just over $0.13 per share.

Combined with a big hit the stock took in mid-2018 (it sold off after jumping in the wake of a very encouraging Q2 earnings report), that current dividend results in a nice yield of 3.7%.

That's well above the present level (2.2%) of dividend-paying stocks on the S&P 500. It also consistently tops the aforementioned peer group of furniture makers: 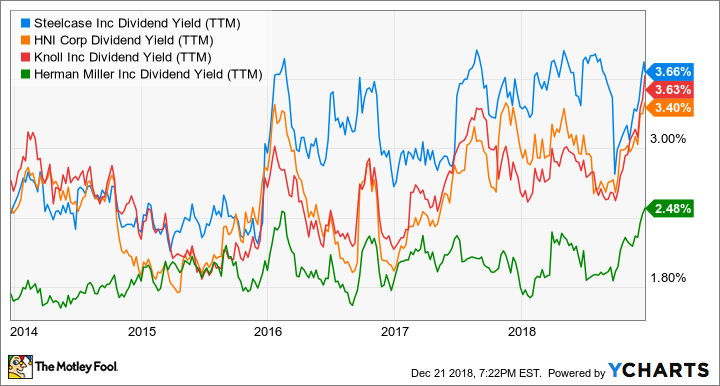 That present dividend yield is attractive, but as we know, stocks trade on potential. Fortunately, Steelcase as a company has very good momentum, and its continued growth should support more dividend raises.

With a still-humming American economy and unemployment remaining close to ground level, the company is well positioned to take advantage of demand. Total orders rose by 14% on a year-over-year basis in the company's Q3, which bodes very well.

And while the U.S. is far and away the company's top market, it's not the only game in town. Over the past four quarters, 28% of its revenue has come from abroad. It takes in more from foreign markets than do HNI, Knoll, and Herman Miller.

Steelcase's own projections have it booking $860 million to $885 million in revenue and $0.24 to $0.28 per share in net profit for the current (fourth) quarter. Those figures would represent double-digit year-over-year growth in both metrics. Analyst projections are broadly in line with the company's estimates.

Finally, Steelcase's cash flow is more than robust enough to fund future dividend raises. It's been cash-flow positive for several years now, with dividend payouts coming in well under the level of FCF. The company's strong position in its industry, plus anticipated demand, should support the continued growth of FCF and, by extension, the dividend.

So while Steelcase might not be the most famous dividend stock on the market, it sure looks like a solid income play. It's well worth a look for income investors willing to consider a slightly off-radar name for their portfolio.