Tim-berrrr! LendingTree (NASDAQ:TREE) shareholders have had a rough 2018, as Mr. Market chopped off more than 35% of the value of the online loans marketplace over the last 12 months. One analyst, however, thinks this new, lower stock price could offer new investors an opportunity to get into LendingTree on the cheap.

This morning, Northland Capital announced it's upgrading LendingTree stock to outperform and assigning this $224 stock a $273 target price. Here's what you need to know. 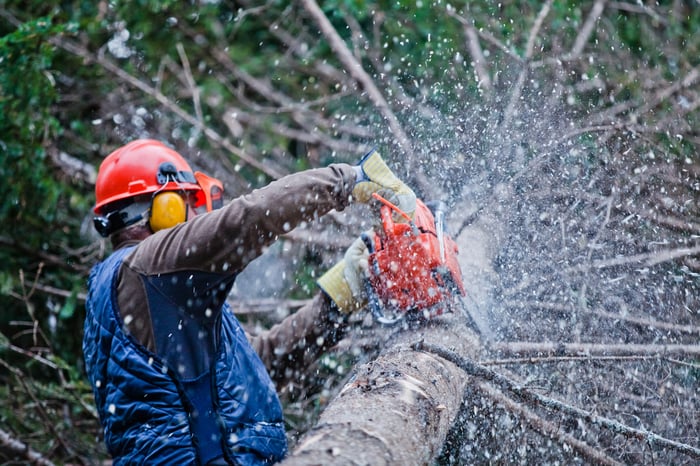 LendingTree had a terrific 2017, more than tripling in value last year, and started 2018 strong as well -- hitting highs north of $380 a share several times in this year's first three months. To hit Northland Capital's new target price of $273, LendingTree won't even have to climb all the way back to its high point of earlier this year. Simply getting within $100 of that old high-water mark should suffice to deliver new buyers a 27.5% profit.

Why does Northland think LendingTree will succeed in this? It's more than just LendingTree's lower stock price that this analyst likes. Last quarter, LendingTree grew its revenue 15% and its earnings 182%. And as the analyst explains in a note covered on TheFly.com, Northland foresees "accelerating 2019 top-line and bottom-line growth" as the company incorporates new acquisitions into its business, and uses them to keep the growth engine running full-tilt.

In another deal  -- one that Northland appears to like even better -- the analyst points out that LendingTree's purchase of insurance comparison marketplace QuoteWizard.com (which closed in October) for $370 million will add "approximately $178M to 2019 revenues, or 23% points of growth."

Deals like these, with the added revenue they bring, lend credence to analyst estimates that LendingTree will post average growth rates of 29.5% annually over the next five years, as reported by S&P Global Market Intelligence. And this, in turn, helps to explain why investors are willing to pay more than 30 times earnings for LendingTree -- but there's also a downside to all these acquisitions LendingTree has been making.

LendingTree's cash flow statements show that from 2014 to 2016, free cash flow generated by the company ($44 million) underperformed reported net income ($85 million) by nearly half. In 2017, LendingTree more than made up the difference, generating over $90 million in positive FCF, a fact that almost certainly contributed to the stock's enormous popularity last year. Lately, however, it seems LendingTree has been slipping back into its old bad habits. S&P Global data show that over the last 12 months, LendingTree's total free cash flow amounts to just $76 million, or about $0.83 per $1 of reported net profit.

Valued on its free cash flow, therefore, LendingTree is selling not for the 30 times multiple we get when valuing the stock on its reported earnings, but for 37 times free cash flow.

Granted, some may argue that even 37 times FCF isn't too high a price to pay for a company with a 29.5% projected growth rate, but here's the thing: In recent years, LendingTree has been depending more and more on outside acquisitions to support its growth rate. The company spent less than $1 million on acquisitions in 2014, and no money at all in 2015. But in 2016, LendingTree spent $86 million, in 2017, $66 million, and in 2018 (so far), $69 million reported -- a sum certain to rise once the QuoteWizard and ValuePenguin acquisitions are accounted for.

More and more, lately, it appears that acquisitions have become an integral part of LendingTree's business model, in which case it would seem appropriate to incorporate the cost of these acquisitions into calculations of the company's free cash flow. Were we to do that for trailing-12-month results, this would shrink LendingTree's trailing FCF number from $76 million to just $7 million -- and inflate its price-to-free-cash-flow ratio to a staggering 403.

And I have to wonder: If Northland Capital were to look at LendingTree from that perspective, would it still feel comfortable saying there's a more "favorable risk/reward" trade-off in LendingTree stock today?