Please ensure Javascript is enabled for purposes of website accessibility
Log In Help Join The Motley Fool
Free Article Join Over 1 Million Premium Members And Get More In-Depth Stock Guidance and Research
By Anders Bylund - Dec 28, 2018 at 8:07AM

This was an easy win.

Everybody knows Apple (AAPL 0.17%), the designer of ultrapopular devices like the iPhone, iPad, and MacBook lines. Chipmaker NXP Semiconductors (NXPI 2.46%) may be a less familiar name, but the company supplies important microchips for some of Apple's products and recently made headline-worthy waves in an attempted $44 billion merger with larger chipmaker Qualcomm.

So the two companies do operate in some shared spaces, but which one is the better investment right now?

If you're looking for economies of scale, Apple is your hands-down pick. As one of the world's largest and most profitable businesses, Cupertino sports annual revenues 27 times the volume of NXP's and EBITDA profits 28 times larger. That's for a period in which two-thirds of NXP's profits sprang from Qualcomm's breakup fee -- a one-time payment that can't be counted on in future reports. Normally, Apple's scale looms even more massively over NXP's.

But that's not the whole story.

As impressive as Apple's cash machine is, NXP actually sports wider profit margins right now. The two stocks trade at very similar price-to-earnings ratios -- 13 for Apple and 12 for NXP. Sure, all of these figures include that unique $2 billion windfall from Qualcomm, but here's the kicker: NXP also trades at just 8.3 times forward earnings -- a metric based on analyst projection that most certainly doesn't include any billion-dollar breakup fees. Here, Apple trades at a valuation of 11 times forward earnings.

In other words, NXP isn't just the cheaper stock at this specific moment in time. Trading pros also see deep, deep discounts on this stock based on next year's expected results. 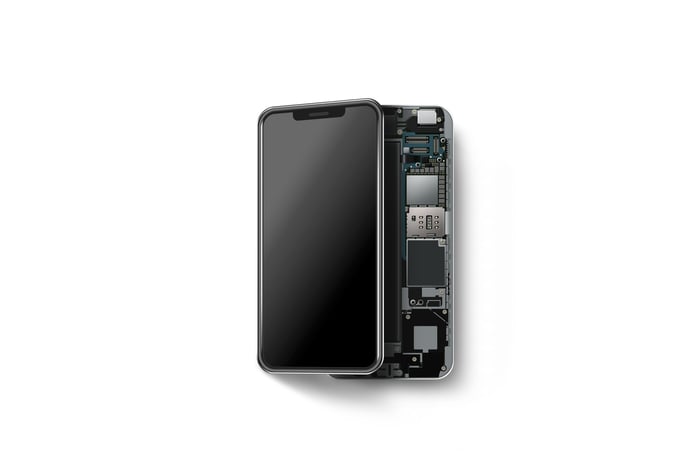 Should you invest in the phone or in the chips that make it possible? Image source: Getty Images.

The bargain-bin value isn't the only reason to prefer NXP's shares over Apple's. It's also a matter of diversification.

Apple derived a massive 63% of the 2018 fiscal year's revenues from a single product line -- iPhones. That's down from 77% two years ago but still places an uncomfortable amount of pressure to keep delivering insanely great products and results in this single category.

By contrast, NXP is an established leader in five different industries ranging from automotive and industrial computing to radio frequency power amplifiers and mobile security chips. Sure, about half of NXP's trailing sales stem from the automotive sector, but NXP supplies a wide variety of chips to every major car maker. This is no one-hit wonder.

I keep wondering what happens when Apple stops impressing consumers with the latest, greatest iPhone variation. Cupertino's Plan B is far from clear, and investors expect more than careful management of the company's existing cash pile. That day may never come, or it could happen in 2019. Some might even argue that the last couple of iPhone iterations started Apple down a less successful road. We may have hit "peak iPhone" already.

The company shipped 231 million iPhones in 2015 before backing down to 212 million in 2016 and roughly 218 million in each of the last two years. Revenues are rising because Apple is charging higher prices for each phone, not because it's selling more of them. I don't want to own this stock if and when the other shoe drops and Apple's loyal customers start looking elsewhere for their next smartphone.

Meanwhile, NXP has the same stranglehold on automotive computing, near-field communications, and mobile security that inspired Qualcomm to bid $44 billion for the company. Simply returning to that valuation would more than double NXP's share prices, and that's just one step in a long-term journey. One-trick pony Apple is the risky pick here, while NXP's broad range of products and markets lets you sleep at night.