I once heard rain described as liquid sunshine. The idea is scientifically unsound, of course, but the sentiment isn't a bad one. Looking at the bright side of seemingly tough situations can help you get through them. And it can lead to an even better future.

The stock market has been quite stormy over the last few months of 2018. But there is a bright side: The stocks of strong businesses are cheaper than they've been in a while. The challenging market presents a great opportunity for investors to buy stocks heading into the beginning of the new year.

There are plenty of attractive choices out there. I've personally scooped up shares of eight stocks as the overall market fell. But what is the top stock to buy for 2019? In my view, it's Alphabet (NASDAQ:GOOG) (NASDAQ:GOOGL). 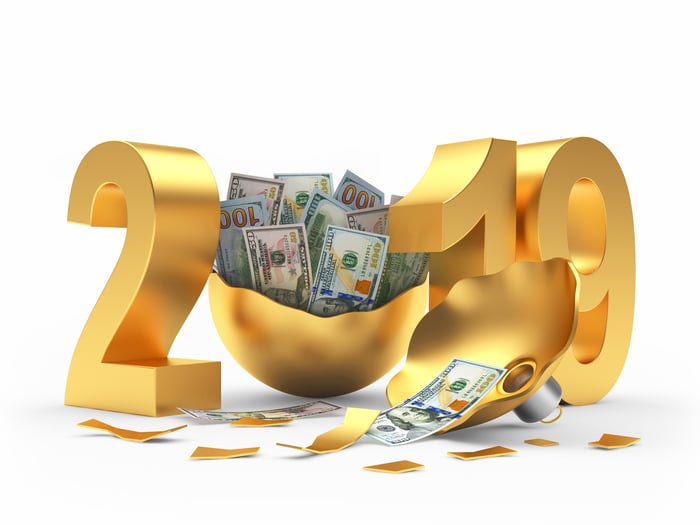 You've probably seen some predictions that the stock market will continue to tank in the coming year. On the other hand, you've also probably read headlines stating that there could be a strong rally in 2019. The truth is that no one knows what's in store in the new year.

But regardless of what happens, Alphabet should keep on rocking. The company has durability. People aren't going to quit using Google for internet searches because the stock market is up or down. They're not going to cut back on watching YouTube videos.

In Alphabet's earnings call in October, Google CEO Sundar Pichai noted that the company now claims eight products that are used by at least 1 billion people every month (in addition to Google Search and YouTube, they include Android, Chrome, Google Play, Gmail, and Maps). Whatever 2019 holds, you can pretty much count on 1 billion or more people still using these products at the end of the year.

Warren Buffett would describe Alphabet's durability factor as a moat. A moat presents a great visual picture for what Alphabet offers. The company's products are so widely used that they're hard to compete against. And the more they're used, the more valuable they are to the advertisers who provide more than 85% of Alphabet's total revenue.

A moat defends a castle -- or, in this case, a business. But Alphabet isn't just playing defense with its core Google properties. The company is developing ways to more effectively monetize applications such as YouTube and Maps. It's also using a type of artificial intelligence (AI) called machine learning to improve user experiences and increase advertising opportunities.

Multiple bets that could pay off

Alphabet is really playing offense with its "other bets," the name the company uses to categorize several initiatives. These other bets don't contribute much to the company's financial performance yet, but they present multiple ways for Alphabet to generate significant growth in the future.

For now, most of the revenue that is made by Alphabet's other bets stems from sales of internet and TV services through its Access subsidiary. However, the company's Verily healthcare-focused subsidiary also brings in revenue from its licensing deals and research and development collaborations with several of the world's biggest drugmakers and medical device companies.

While Verily works on developing miniaturized continuous glucose monitoring systems, surgical robots, and smart lenses for adaptive vision correction (just to name a few of its projects), another Alphabet healthcare subsidiary has an even loftier goal. The company's Calico business is researching ways to extend the human life-span.

Speaking of lofty goals, Alphabet's X subsidiary is targeting several "moonshot" projects. The subsidiary spun off two initiatives into independent businesses earlier this year -- Loon, which is using a network of high-altitude balloons to extend Internet connectivity to remote areas, and Wing, which is developing an autonomous drone delivery system. X is currently working on smart glasses for workers to use and free space optics, which uses beams of light to transmit data at high speeds.

Two other businesses have also "graduated" from Alphabet's X subsidiary. Chronicle focuses on the fast-growing cybersecurity market. But I'm most excited about the prospects for Waymo, which is the leader in developing self-driving car technology. Waymo recently launched a self-driving taxi service in Arizona. UBS analyst Eric Sheridan thinks the company could generate more than $100 billion in annual revenue by the end of the next decade -- close to what Google will make from advertising this year.

In addition to these initiatives, Alphabet is also placing bets on other companies. Its CapitalG business operates a growth equity investment fund with investments in companies including ridesharing service Lyft and online brokerage Robinhood. GV is the company's venture capital arm that has made strategic investments in leading-edge consumer products, healthcare, AI, cybersecurity, and robotics businesses.

Alphabet's durability and multiple pathways to generate growth make it my favorite stock to buy in 2019. But it's important to understand that how the stock actually performs in 2019 isn't why Alphabet ranks as my top stock.

I stated earlier that the company has durability. And it does. But Alphabet's share price could very well go down in the coming year. In 2008, Alphabet lost more than half of its market cap. That was during a recession, of course. What I like, though, is that even during that rough year Alphabet's revenue jumped more than 30%. That's the kind of durability I'm talking about.

And as much as I like several of Alphabet's other bets, I don't expect any of them to make the company a lot of money in 2019. That doesn't matter, though. Alphabet is making long-term strategic bets that could disrupt existing markets -- exactly what you'd want it to do.

The key here is that to pick the top stock to buy in 2019, you have to think well beyond 2019. Alphabet certainly is.