Google might not be Alphabet's (GOOG 0.77%) (GOOGL 0.67%) only $100 billion business. Waymo, Alphabet's autonomous vehicle company, launched its taxi service in Arizona this month, and at least one analyst believes it could generate over $100 billion in revenue by 2030.

Waymo is currently charging a select group of riders in the suburbs of Phoenix rates comparable to Uber or Lyft. That pricing could change, however, as the company improves its automated driving technology, scales the service worldwide, and finds different ways to monetize it. That could potentially lead to $114 billion in revenue in 2030, according to UBS analyst Eric Sheridan.

For reference, ride-sharing market leaders Uber and Lyft generated just $2.8 billion and $909 million, respectively, through the first six months of 2018. But the ride-hailing industry could balloon to $235 billion by 2030, according to Goldman Sachs analysts. 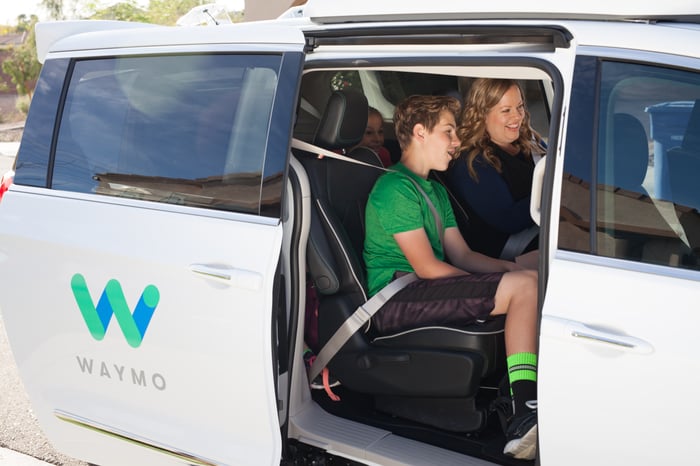 How Waymo could make $100 billion

There are three main potential sources of revenue for Waymo.

At first, Waymo will primarily generate revenue from fares. This is the only source of revenue for competing ride-hailing services like Lyft and Uber. Ultimately, automation should drive down the cost of a ride and thus the price consumers pay for a fare. As more automated driving solutions enter the market from competitors like General Motors' (GM 1.29%) Cruise and Uber, fare prices will fall. GM has a further cost advantage in that it actually produces the cars its self-driving technology goes into, which could push fare prices even lower.

But Waymo is better-positioned than anyone else to monetize users through things like advertising while using its service. Waymo's relationship with Google gives it access to some of the best digital advertising technology and targeting data in the world. And when users are in a Waymo car, location-based advertising can become even more valuable.

Advertising may appear in the Waymo app or in the car while people are taxiing. Waymo may also develop in-car entertainment in order to make advertising more digestible. Google's YouTube, for example, generates billions in revenue per year by delivering hours of entertainment to its users.

Finally, Waymo could generate revenue from licensing its data and technology. Waymo has more miles driven than any other automated vehicle company. It announced 10 million cumulative miles in October. By comparison, GM Cruise reported driving just 131,000 miles between December 2016 and November 2017. Cruise notes its San Francisco-based miles may have a lot more value than Waymo's miles in wide-open Phoenix suburbs.

Waymo could license its mapping data to other services. It could potentially license its technology to other industries with somewhat different applications than taxiing.

Even more ways to make money from autonomous vehicles

Sheridan's estimate only includes revenue from Waymo's core ride-hailing service. But Waymo could expand to commercial industries such as delivery. Uber has already tried to implement a self-driving truck service, but it shuttered the project earlier this year. Shutting down the service may have been tied to the lawsuit it faced from Waymo.

Waymo may find better luck with a trucking service unhindered by lawsuits and with the advantage of millions of miles driven on regular roads.

Waymo may also be able to offer logistics services by working with delivery companies or online retailers. Package volume in the United States has doubled since the start of the decade, so finding ways to improve costs for getting items from point A to point B presents a massive opportunity for autonomous vehicles.

Overall, Waymo is the most promising Other Bet in Alphabet's portfolio. The potential for it to generate a huge amount of revenue and significant profits makes it an extremely valuable part of the company. UBS pegs the value between $25 billion and $135 billion today with a base case of $75 billion. That's about 10% of Alphabet's total market value today, making it an important business for Alphabet investors to watch.