The traditional Hollywood exhibition, production, and distribution segments aren't as threatened by the video streaming king as many suspect.

Conventional wisdom has it that Netflix (NFLX 1.57%) is a major disruptive influence on all aspects of the movie businesses. Many say that the streaming service, which now has over 137 million subscribers, is pulling customers from traditional film purveyors -- studios, distributors, and cinemas alike.

However, a recently issued report finds that it isn't upending the exhibition segment. This research is backed up by outside data, which demonstrate that those other segments are resisting disruption, too. 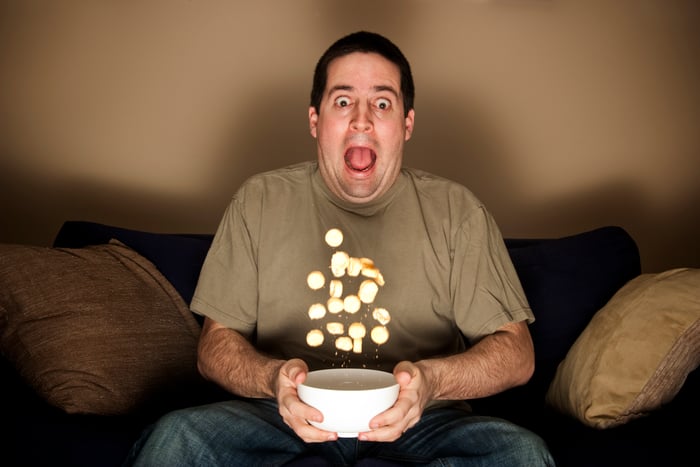 The report, from analysts at Ernst & Young, was commissioned by a film exhibition lobbying group called the National Association of Theater Owners. It found that streaming services don't draw business away from movie theaters but that the two are complementary. Put directly, the more a person watches films in cinemas, the more that person streams movies and TV.

The data, drawn from 2,500 respondents, paints a clear picture. This is how it broke down. The top row indicates the number of visits to a movie theater in the preceding 12 months, while the left column shows the mean number of hours a respondent devoted to streaming entertainment per week.

Note how the highest figures, the ones above 30%, tend to occur when the correlation is fairly direct -- including lots of movie theater visits and many hours of streaming.

Although there are several mitigating factors -- a high concentration of grosses at the very top of the most-popular list, for one, and the nearly instant success of AMC Entertainment's (AMC -3.12%) Stubs A-List subscription program, for another -- such a growth rate shows that Americans remain serious movie geeks.

Consequently, times are generally good for producers -- and distributors, too.

For example, one wearer of both hats, Walt Disney's (DIS 2.40%) studio entertainment (i.e., movie) division, delivered a strong 19% year-over-year revenue increase in the company's fiscal 2018. It managed to do so despite a few high-budget flops -- A Wrinkle in Time and The Nutcracker and the Four Realms, to name two, did not benefit from the Disney touch.

There's no doubt that Netflix is willing to do whatever it can within its means to attract top-level Hollywood talent and develop buzz-worthy native content. It's certainly changing the configuration of the entertainment business in meaningful ways. Papers have been written and proclamations proclaimed about the effects of this influence; we don't have the space to get fully into this topic here.

What the company is not doing, however, is thoroughly upending good old Hollywood. Viewers will still wait in line at the multiplex to see the latest Pow! Zap! superhero film from Walt Disney's Marvel or AT&T's DC Entertainment. And many will still, somehow, also make time for plenty of Netflix and chill.

So perhaps it's a good time to consider putting a few dollars into the stock of a top exhibitor, producer, or distributor. Consider the following:

All four of these entertainment stocks are far cheaper than Netflix on both a trailing and forward P/E basis, and haven't seen the share price acceleration of the streaming giant. Plus, all pay a dividend that puts cash directly in an investor's pocket. We've seen the results that Disney and AMC have generated in catering to their respective audiences, and Universal owner Comcast and exhibitor Cinemark have potential for growth as well. I believe that their shares will perform better than many investors think -- and the companies will withstand Netflix's assault to defend their own niches within the entertainment industry.