Breaking down some sales data.

Modern sporting rifles -- semi-automatic long guns based on the AR-15 design -- are an extremely popular rifle among gun owners, but there are plenty of other semi-automatic rifles on the market that are in high demand with gun buyers.

To see which rifles people are buying these days, I turned to GunBroker.com, the world's largest online auction site for firearms and accessories, which every month publishes the five best-selling firearms on its Gun Genius site.

Unfortunately, it doesn't give details on units sold or even dollar amounts, but rather lists the best-sellers in order of popularity. So I compiled all of the monthly lists from 2018 (through November) and tallied the results based on a rough scoring system. There were 11 different models from six separate manufacturers that made the overall list, and these are the top five in reverse order.

One thing that excites gun enthusiasts about the Kel-Tec RDB is its ability to eject spent rounds downward rather than out the side port. Other things that make this yet another hard-to-find rifle from Kel-Tec are the fact that it uses the AR platform 5.56 round, can be used ambidextrously, and has an ease and simplicity of use. Plus, the bullpup design places the action and the magazine well behind the trigger. RDB, in fact, stands for rifle/downward ejecting/bullpup. The firearm was released to critical acclaim, and even at around $1,500, it is difficult to find. 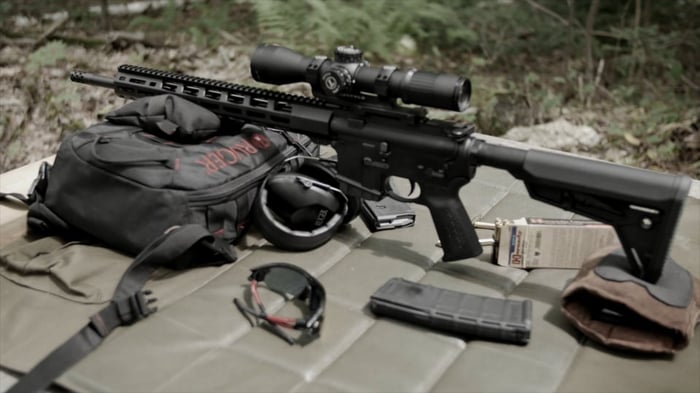 Sturm, Ruger (RGR -0.15%) and Kel-Tec dominated the list this year, each having three different rifles vying for the top five. The Ruger AR-556 naturally made the list. It has been a big part of the gunmaker's arsenal since it was introduced in 2014, and has consistently been one of its best-sellers. That's probably because it's a basic, no-frills AR that forgoes a lot of accouterments that give ARs their signature look, while it pays attention to the parts that matter. At around $800, it's easy to see why this is a modern sporting rifle for every enthusiast.

The second Kel-Tec rifle on the list, the pistol-caliber Sub-2000 carbine, easily accepts most handgun magazines while also folding for easy storage, making it perfect for those taking a rifle while backpacking. Because it comes chambered in either 9 mm or .40-caliber, it is easy to pair with a similarly chambered handgun, allowing them to share magazines. In the latest version, rails were added to allow for the mounting of accessories such as lights or optics, and the barrel was threaded to add a sound suppressor. As with virtually all Kel-Tecs, the rifle is praised for its accuracy and durability, which at around $500 makes it a worthwhile addition to one's collection. 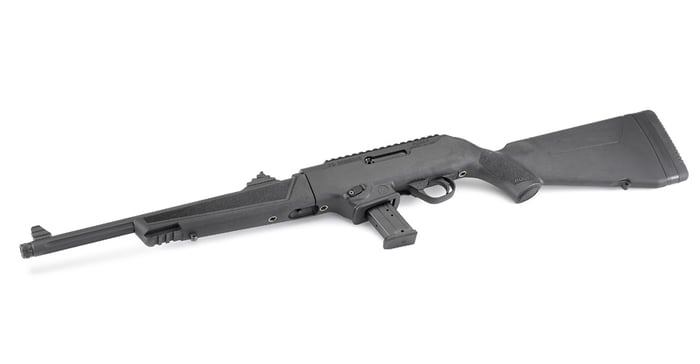 The second Ruger rifle to make the list is also a pistol-caliber rifle, a category that is generating a lot of interest from gun enthusiasts. The Ruger PC Carbine was the top choice of gun buyers on the GunBroker 2018 list more times than any other semiautomatic rifle, perhaps because of the interchangeability of the magazines. The PC Carbine uses 17-round Ruger SR9 magazines, one of which comes with the rifle. Or shooters can swap out the magazine well insert for one that will accept Glock magazines (also included with the rifle), especially useful since Glock makes a 9-mm magazine that holds up to 33 rounds. It also disassembles, just like the Ruger 10/22 Takedown rifle. Because most pistol carbines are based on the AR platform, they carry hefty price tags of $1,000 or more, but the PC Carbine has a manufacturer's suggested retail price of just $650.

Speaking of the Ruger 10/22, this iconic rifle was a top-five contender virtually every month at GunBroker and landed in the top three positions every time. It has been an extremely popular firearm since it was introduced in 1964 and is, in fact, the best-selling .22-caliber rimfire long rifle on the market, with well over 6 million sold over the years. Although Ruger lost the title of biggest U.S. firearms manufacturer to Smith & Wesson last year, it remains the second largest rifle maker, behind only Remington, which is practically synonymous with the long gun. And it is primarily because of the 10/22 that Ruger is such a popular choice.

There are numerous 10/22 models, such as the Takedown version mentioned above, and the rifle's popularity has spawned a vast aftermarket for the gun. Its simple design makes it both a quality adult firearm, and a good choice for introducing young people to the shooting sports. It remains a favorite for small-game hunting, as well as target shooting, and at around $200, it is very affordable.

The long reach of the long gun

The AR platform has been called "America's rifle" because it is arguably the most popular rifle sold in the U.S. today, though exact sales numbers are hard to come by. Some estimate that modern sporting rifles account for 35% of all firearms sold today.

Yet as this survey indicates, just because a certain style of firearm grabs the headlines, gun owners, buyers, and enthusiasts are actually buying a broad spectrum of long guns that cut across platforms.