Please ensure Javascript is enabled for purposes of website accessibility
Log In Help Join The Motley Fool
Free Article Join Over 1 Million Premium Members And Get More In-Depth Stock Guidance and Research
By Rich Duprey - Jul 22, 2017 at 11:47AM

The gunsmith makes up in innovation what it lacks in historical significance.

Sturm, Ruger, & Co. (RGR -3.55%) may not have the same storied history as rival Smith & Wesson, but that doesn't mean the gunslinger isn't an interesting case study all by itself. There's a reason millions love Ruger guns, after all.

Following are 12 things you just might not know about Sturm, Ruger, and why they're so important to it today.

Sturm, Ruger's lineage doesn't stretch back quite as far as American Outdoor Brands' (SWBI -1.27%) Smith & Wesson (which was created in the mists of time back in 1852), but existing and producing quality firearms for nearly 60 years has been a hallmark of this manufacturer.

2. Alexander Sturm and William Ruger began with a $50,000 investment.

In the pantheon of great gunmakers, the general public is probably more familiar with the likes of Samuel Colt, John Browning, Richard Gatling, Mikhail Kalashnikov, and Henry Deringer than with Alexander Sturm and William Ruger. Yet the company they started and which bears their names, began with a $50,000 investment from Sturm and would go on to become worth $1 billion today.

Within two years of the gunmaker's founding, however, Sturm would contract hepatitis and die, and Ruger would become renowned as arguably one of the greatest gun designers since Browning. He died in 2002. Today their company is among the most respected manufacturers in the industry.

The gunmaker firmly believes in the right of people to own firearms, and in last year's presidential election committed to donating to the National Rifle Association's Institute for Legislative Action $2 from every gun sale it makes between August and election day, as well as making a matching contribution to the gun rights group of up to a total of $5 million. It has run similar campaigns in prior years.

Despite the vagaries of the gun industry, Sturm, Ruger's stock has gained over 250% over the past decade, compared to a 61% gain by the S&P 500. 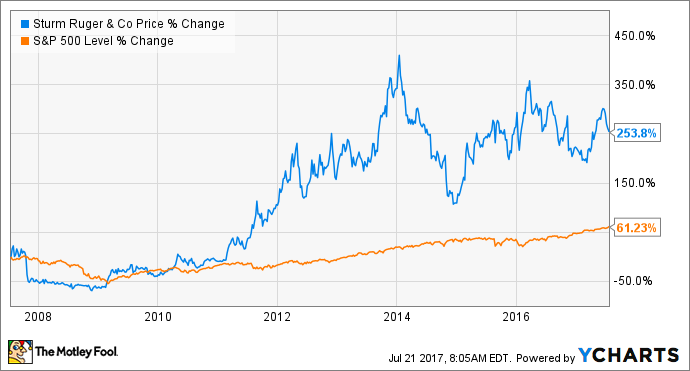 5. Ruger offers consumers over 400 variations of more than 30 product lines.

6. Ruger had the chance of becoming synonymous with the AR-15.

The AR-15, the most popular style of modern sporting rifle on the market, was originally manufactured by the ArmaLite gun manufacturing company (the "AR" in the name refers to "ArmaLite Rifle," not assault rifle). When it sought to find another manufacturer of the platform, it first approached Sturm, Ruger, which turned down the opportunity.

ArmaLite subsequently went to Colt, which bought the rights to it, modified the AR, and then sold it to the U.S. military as the M16 rifle. Colt subsequently made a civilian version, which helps explain why it is often confused with a military weapon.

However, Ruger's AR-556 is one of the top three selling rifles on GunBroker.com, the world's largest online auction house for firearms and accessories. The AR-556 was one of the firearms Ruger introduced that helped its new product segment account for 29% of firearms sales in 2016. 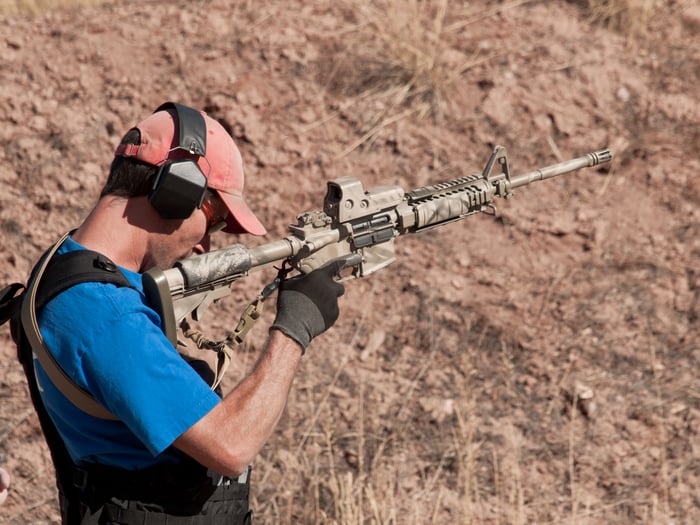 7. Ruger once made golf club heads.

Not only does Ruger make firearms, but it also has an investment castings business that's used in a wide range of industries. One of those was in golf, where it was the sole supplier of the enlarged titanium heads used for Callaway Golf (ELY -1.81%) drivers. In 1995, it subsequently entered into a 50-50 joint venture with Callaway to produce its then-popular Big Bertha driver head. The original agreement called for Ruger to produce $150 million worth of heads.

Ruger ended up buying out Callaway's half of the joint venture, but continued making golf clubs for numerous other manufacturers until it petered out around 2005. The investment castings business today only accounts for around 1% of revenues.

8. Ruger is the biggest gunmaker in the U.S.

While Smith & Wesson may be better known by people outside of the firearms industry, it is Sturm, Ruger that's the country's largest manufacturer. According to the Bureau of Alcohol, Tobacco, Firearms, and Explosives, Ruger produced 1.67 million rifles, shotguns, pistols, and revolvers in 2015 (the latest data available), compared with 1.47 million firearms from Smith & Wesson.

9. The difference is long guns.

10. That also makes Ruger one of the biggest rifle manufacturers in the country, too.

Other than Remington, which almost exclusively produces rifles and shotguns, Ruger is the second biggest rifle manufacturer, almost twice as large as as third-place Vista Outdoor's Savage Arms, which made 381,000 rifles. Remington produced 774,000 rifles in 2015.

Introduced in 1964, the 10/22 has long since surpassed 6 million units produced. 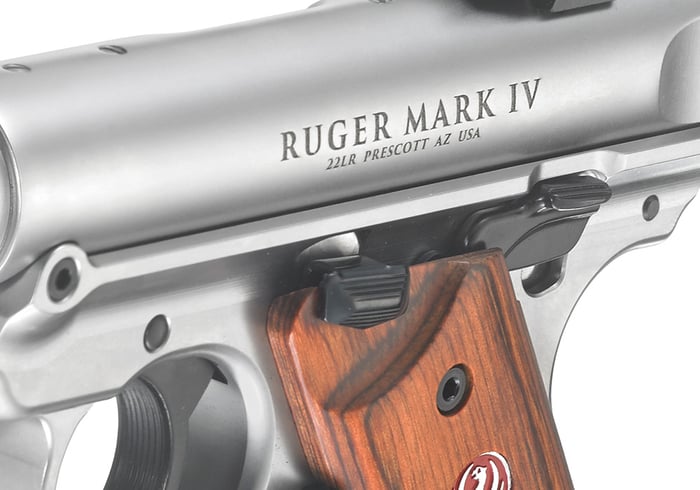 12. Ruger's newest Mark IV handgun is a direct descendant of the Ruger Standard.

The Ruger Standard was the very first handgun produced by Sturm, Ruger in 1949, marketed as an inexpensive .22 caliber rimfire perfect for sport, target shooting, and plinking. Superlatives (and even books) have been written about the Standard (which would come to be called the Mark I later on), and it was only superseded by the Mark II in 1982.

The Mark III hit the market in 2005, with improvements and innovations added with each iteration. Last September it introduced the latest version, the Mark IV, which is similar to its predecessor, but with a greatly simplified one-button takedown.