Shares of Camping World Holdings (NYSE:CWH) stock -- already performing 10 times worse than the rest of the stock market this year, with a share price loss of more than 70% -- took another plunge Monday morning, falling nearly 10% before retracing to close the day down "only" 8.1%.

The reason: On Friday, after the market closed, Camping World filed an 8-K notification  with the SEC, advising that its president, Roger Nuttall, "resigned from his position as President of Camping World, Inc. and [its subsidiary] FreedomRoads Holding Company, LLC" -- 10 days ago. 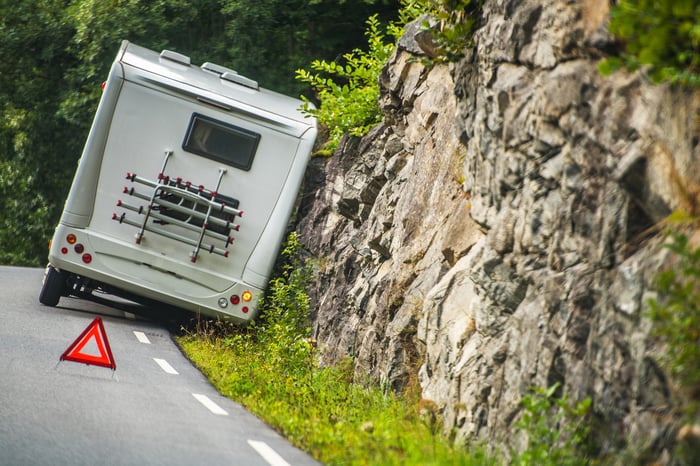 Camping World didn't provide any context for the announcement, such as whether Nuttall resigned of his own volition or was forced out. Nor did management explain why it delayed telling investors of this departure for so long after it happened.

Investors apparently aren't pleased with either omission, and to indicate their displeasure, they're selling off shares of the RV retailer and service provider stock.

Perhaps not coincidentally, Camping World Holdings stock also sold off pretty hard, down 11%, on the day of Nuttall's departure, Dec. 21. At the time, of course, no one knew what was causing the sell-off, as there was a notable lack of company-specific news to explain it. Now it seems we do know what caused that earlier sell-off.

That Camping World waited a week to tell us about Nuttall's departure may even raise SEC implications regarding selective disclosure of news material to the stock, and the potential for lawsuits. Seems to me that's another good reason for investors to be shunning the stock today.