It's all about interest rates for this niche bank.

New York Community Bancorp (NYCB -0.22%) rewards its shareholders by paying out almost all its earnings every year, resulting in an industry-leading dividend yield that currently tops 7.5%.

Upon closer inspection, though, investors will find that New York Community Bancorp is something of an enigma in the banking industry. It's half the best bank in the world and half the worst. The question is whether the good half is good enough to paper over the bad.

One of the best lenders in the business

Most banks do more than just lending, generating fees by managing customers' investment portfolios, servicing mortgages, or by helping small businesses accept debit and credit cards, just to name a few. But New York Community Bancorp is almost all lending -- that's how it generated more than 90% of net revenue in the first nine months of 2018. 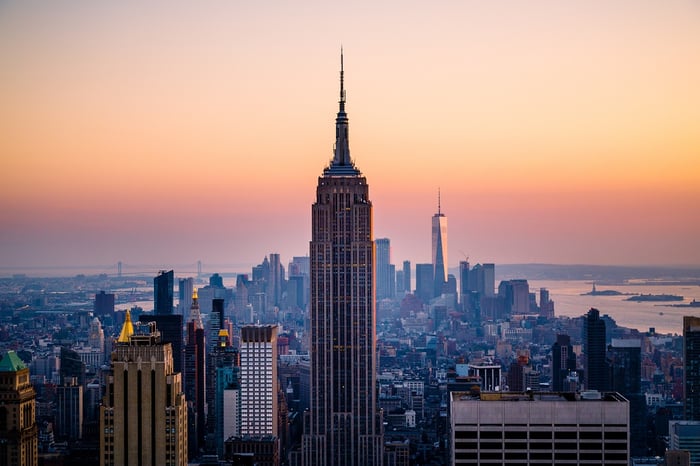 As a result, New York Community Bancorp has some of the most impressive underwriting results of any lender you'll find. And while it encounters the occasional bad loan, as all banks inevitably do, it almost always recovers what it is owed, leading to zero or near-zero credit losses in most years as a public company.

Consider that in the years surrounding the financial crisis, its net charge-offs peaked in 2011 at just 0.35% of average loans. To put that in perspective, a net charge-off ratio of 0.35% is in line with net charge-offs at high-quality institutions right now after several years of economic expansion and rising employment.

But lending is only half of the business of banking. The other half is bringing in deposits, and it's here that New York Community Bancorp really struggles.

For all the success that New York Community Bancorp has as a lender, it isn't very good at convincing customers that it's a good place to keep their deposits. Good deposit-gathering banks lure deposits with features or service. Maybe it's convenient branch locations, a quality mobile app, or by having the best lollipops at the counter. Whatever it is, banks want to attract depositors who aren't primarily concerned about the rate they earn on cash they keep in their account.

New York Community Bancorp lures depositors with high interest rates, almost as if it were an online bank. In an extreme example, consider that its interest-bearing checking accounts paid an average interest rate of 1.5% last quarter, which was increased from 1.33% the quarter before. This isn't a credit union being generous -- it's a publicly traded bank that finds itself in the precarious position of having to pay up to ensure depositors stay put.

When it comes to deposits, New York Community Bancorp is almost a pure price-taker. Every time the Fed raises rates, it must pass on a substantial rate increase or risk losing them. That's proving to be troublesome, because the rates it pays on its deposits are increasing at a much faster rate than what it earns on its loan portfolio.

The best way to illustrate New York Community Bancorp's funding problems is to observe the change in its interest expense since the first of the Fed rate increases at the end of 2015. The chart below shows how its interest expense has gone up, quarter after quarter, rate hike after rate hike. 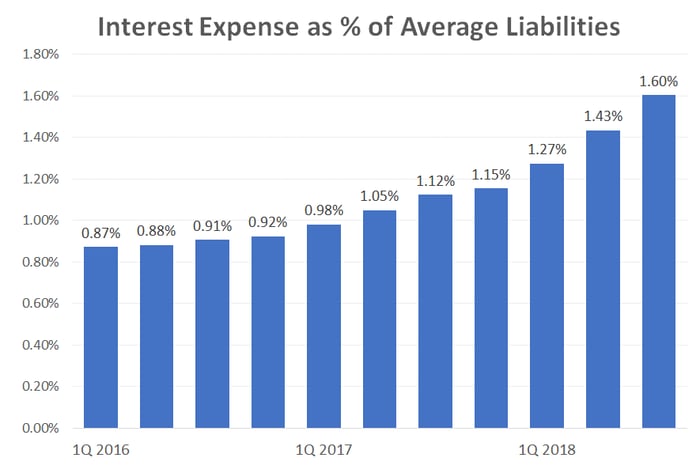 To be sure, this isn't a new thing. New York Community Bancorp has never really been good at the deposit-gathering game.

If you go back in time to 2006, when the federal funds rate topped out at 5.25%, New York Community Bancorp was paying an average of 3.35% on its deposits, up from 2.10% the year earlier. Over the years it has acquired other banks in far-flung places, operating branches in Arizona, Florida, and Ohio in hopes of attracting sticky deposits from customers who are less rate sensitive.

A pure bet on rates

Because New York Community Bancorp makes virtually all its money in lending, its earnings are powered almost exclusively by the difference between what it earns on its loans and what it pays on its deposits. That's become a bit of a problem, because the spread is shrinking. 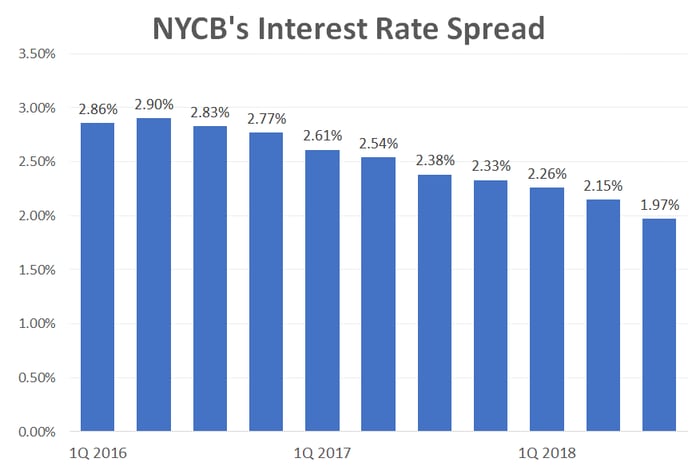 For its part, management seems to believe that the market is simply too worried about the yield curve. In October, it approved a repurchase plan to buy back as much as $300 million of stock, financed by issuing debt. Shortly thereafter, S&P downgraded the bank's credit rating to junk, citing the aggressiveness of using borrowed money to buy back stock given New York Community Bancorp's rate-sensitive balance sheet.

Is New York Community Bancorp a buy? Only if you have a crystal ball that is telling you that longer-term interest rates are soon to move much higher, and without a correspondingly large increase in short-term rates.