The e-commerce giant's stock was only one of two FAANG stocks that finished 2018 in the green.

Despite the sharp pullback in the e-commerce and cloud-computing titan's stock since early October, that's still a great showing, considering the overall market was down last year. The S&P 500 and Nasdaq indexes returned negative-4.4% and negative-3.9%, respectively.

Moreover, Amazon was only one of two FAANG stocks, along with Netflix, that finished 2018 in positive territory. Facebook was a double-digit loser, while Apple and Google parent Alphabet suffered single-digit losses. 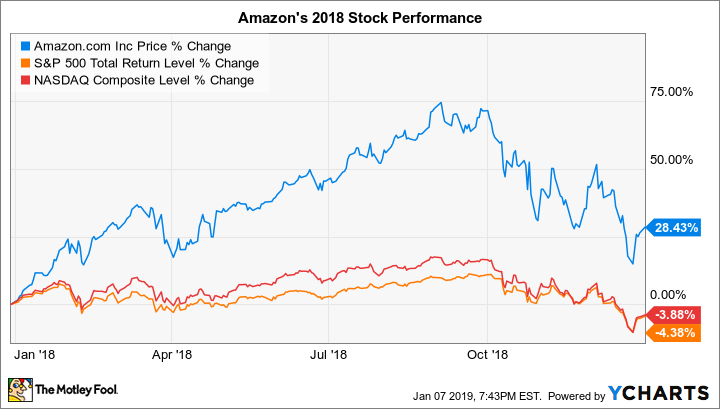 We can largely attribute Amazon stock's solid performance in 2018 to the company's strong quarterly results. In fact, in all four quarters that were reported last year (the fourth quarter of 2017 through the third quarter of 2018), Amazon not only beat, but also whipped, Wall Street's earnings estimates, along its own operating income guidance. (Amazon doesn't provide earnings guidance.)

Here are Amazon's revenue, operating income, and earnings-per-share growth results for the first three quarters of 2018:

The two big themes for all three quarters were:

Amazon stock is looking more attractive from a valuation standpoint than it has in some time. That said, investors should proceed with caution with investing in stocks in general, as the macroeconomic factors -- such as slowing global growth, rising interest rates, and the trade war with China -- that led to the big stock sell-off that began in the fall remain largely unchanged.

That doesn't mean investors should stop buying stocks, but it does mean dollar-cost averaging is more important now. (Dollar-cost averaging involves building your full position in a stock by investing the same dollar amount at some set time interval, such as quarterly.)