Please ensure Javascript is enabled for purposes of website accessibility
Free Article Join Over 1 Million Premium Members And Get More In-Depth Stock Guidance and Research
By Jeremy Bowman - Updated Apr 15, 2019 at 11:08AM

Shares of the burrito chain jumped on a positive analyst note.

Shares of Chipotle Mexican Grill ( CMG 0.58% ) jumped 6.6% on Monday thanks to investor optimism sparked by a bullish analyst note for the fast-casual burrito chain. Analysts at BTIG said there were several levers for the company to pull to drive outperformance in 2019. 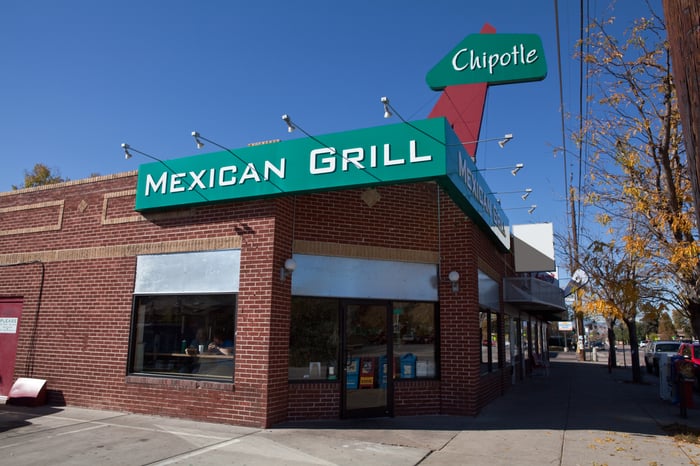 One thing Chipotle has done is launch "lifestyle bowls" designed to fit with the diets people are following as part of their New Year's resolutions. They include a Paleo Salad Bowl, a Keto Salad Bowl, and a Whole30 Salad Bowl. Under new CEO Brian Niccol, Chipotle appears to be leaning more on incremental improvements like promotions such as the new bowls, special discounts and giveaways, and new marketing initiatives.

However, BTIG sees this as positive as memories of the 2015 E. coli crisis are fading away, and said the bowls have low-risk/high-return potential.

Chipotle shares continue to be priced as if the stock will return to its former greatness, however progress has been slow. Though the market has signaled its approval of Niccol, Chipotle is not going to return to its blowout growth from a few years ago, before the E. coli outbreak hit, as comparable sales increased by a moderate pace of 4.4% in its most recent quarter, and new store growth has slowed.

Still, if the economy remains strong, Chipotle should continued to put up solid growth through 2019.