A look back at the groundbreaking device.

"Every once in a while, a revolutionary product comes along that changes everything."

It's usually hyperbole when someone says a product "changes everything." But every once in a while, one actually does. At the Macworld conference on Jan. 9, 2007, Apple (AAPL -2.46%) CEO Steve Jobs announced that the company had reinvented the smartphone, developing a product that combined a cellphone, mobile internet, and its best-selling iPod music player -- all in one device.

At the time of the announcement, the soon-to-be iconic iPhone had more than its fair share of doubters. Microsoft's then-CEO Steve Ballmer said: "There's no chance that the iPhone is going to get any significant market share. No chance. It's a $500 subsidized item." It wasn't just tech executives who had their doubts. More than one tech-centric publication, including the websites Engadget and TechCrunch, ran articles predicting the iPhone would fail. We all know how that turned out. 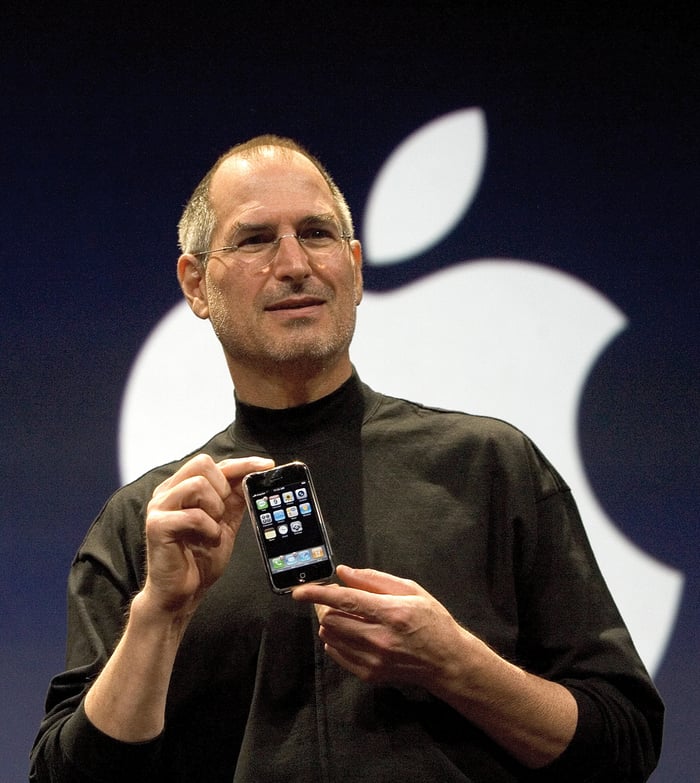 Consumers weren't swayed by the initial lackluster coverage, and lined up by the thousands to buy Apple's latest product. They were not disappointed.

The original iPhone boasted a touchscreen with a 3.5-inch diagonal display and measured 4.5 inches by 2.4 inches, with the option of either 4GB or 8GB of memory. The original model also had a resolution of 320 x 480 pixels, with 163 pixels per inch (ppi), a 2-megapixel camera -- but no third-party apps.

One of the biggest selling points of the iPhone was the multitouch interface and groundbreaking software that allowed users to control the device with their fingers, by tapping, swiping, or pinching. These finger control gestures were revolutionary at the time, though they are commonplace by today's standards.

It's important to remember that when the iPhone was introduced, the best-selling devices had physical keyboards that took up nearly half the real estate on the front of the phone, with a screen on top and buttons on the bottom. The iPhone touchscreen eliminated the need for the keyboard, thereby reclaiming the space.

The device had numerous other state-of-the-art features. The accelerometer could detect when the user had rotated the phone and flip the display while adjusting the ratio. A proximity sensor could tell when the iPhone was lifted to the user's ear and temporarily turn off the display to save power. The ambient light sensor could automatically adjust the brightness of the screen to match the lighting conditions. Users take these features for granted today, but they were radical innovations when the iPhone debuted. The iPhone was the first of its kind. Image source: Apple.

That was just the beginning

A lot has changed in the dozen years since Apple introduced the iPhone.

The most recent top-of-the-line models -- the iPhone XS and XS Max -- boast 5.8-inch and 6.5-inch displays, which go from edge to edge. The screen resolution is a massive 2436 x 1125 pixels, with 458 ppi, and offers up to 512GB of memory. And perhaps most importantly for developers, Apple now has more than 2 million apps in the App Store.

Recent iPhone innovations include the A12 bionic chip that powers the onboard artificial intelligence using a depth-sensing Face ID camera and facial recognition system to unlock the device. Recent models also have a 12-megapixel dual-camera, which takes professional quality pictures and enables users to experience augmented reality and contain many voice-activated features powered by Siri, Apple's digital assistant.

The iPhone has become Apple's most popular device ever, and dwarfs the sales of all the company's other products -- combined. For fiscal 2018, the iPhone generated a mind-boggling $167 billion in sales, nearly 63% of Apple's total revenue.

Even Jobs couldn't have predicted just how popular the device would become. Apple announced that on June 29, 2007 -- just 74 days after its debut -- the company sold its millionth iPhone. Apple went on to sell 6 million in that first year. Less than a decade later, in June 2016, Apple said that it had sold its billionth iPhone. That total has no doubt continued to grow, and likely topped 1.5 billion to round out 2018.

The iPhone not only became Apple's signature device, it also changed how we work and play, inspired countless imitators, and redefined that connection between people and their devices.

Jobs was right: The iPhone changed everything.