The debate about whether AT&T (T -0.41%) or Verizon Communications (VZ -0.94%) is the better dividend stock has been long running among income-focused investors. The two telecommunications giants have a lot in common, but they're also beginning to diverge meaningfully when it comes to evolving their businesses. Investors continue to weigh AT&T's aggressive push into the entertainment space, superior yield, and big debt against Verizon's more focused push into Internet of Things, 5G, and services, lighter exposure to the television industry, and stronger position in the mobile wireless space.

Each stock has its pros and cons, and a case could be made for either one as the superior investment. However, owning both AT&T and Verizon is a way to build diversified exposure in a space that will be at the center of technology, information, and entertainment trends in the coming decades -- while collecting big dividend payouts. 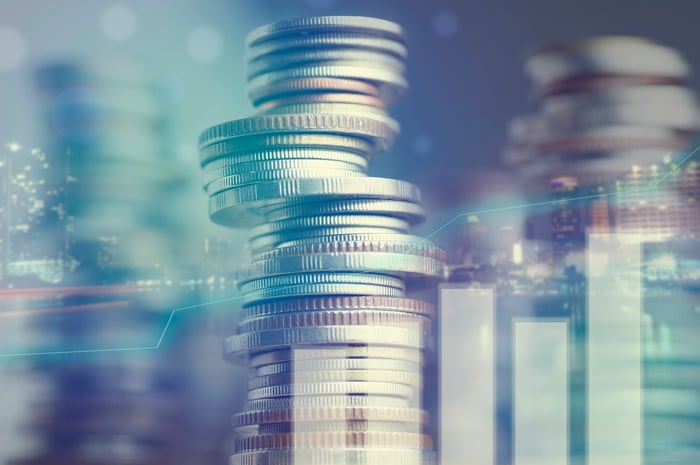 The telecom industry is facing pressure on multiple fronts. Cord-cutting trends have dampened profits in cable and satellite TV, and the standardization of unlimited data packages is hurting pricing power in mobile services. The sector as a whole is low growth, but the leaders in the space typically generate great free cash flow, and AT&T remains an attractive income investment as a result.

The company has America's second-largest wireless network (trailing only Verizion in subscriber numbers) and the largest paid-television user base. There's a good chance it will be able to leverage its brand strength, service bundling advantages, and newly integrated Time Warner wing to continue building on its stellar dividend growth history. Adding new connections for Internet of Things devices and reestablishing a substantial performance advantage with 5G compared to budget-price offerings could also be positive catalysts for the company and help extend its 34-year history of annual dividend growth.

Payout increases have been small in recent years, but AT&T's stock already boasts a whopping 6.7% yield, and the Time Warner acquisition should improve its dividend coverage even though the purchase has also elevated the company's debt. Paying down the debt is a priority and suggests that payout growth will continue to be slow, but its current distribution is well covered. Comments from management suggest that AT&T expects to generate more than $21 billion in free cash flow in the current fiscal year, and that's without factoring in a contribution from the Warner businesses, which brought in roughly $4.6 billion in FCF in 2017.

Like AT&T, Verizon is a telecom stock that offers a big yield and a path to benefiting from potentially revolutionary tech shifts like 5G and the Internet of Things. For yield-seeking investors who don't see sufficient appeal in AT&T's massive push into the entertainment space or for those who simply want to diversify their telecom position, Verizon stands out as a worthwhile holding. The stock's 4.2% yield is impressive despite coming in below AT&T's, and the company is posting superior earnings growth and seems to be facing lighter headwinds because of its business makeup.

Verizon isn't forgoing an entertainment content component, having acquired AOL and Yahoo! in recent years, but it has less exposure to the television space than AT&T. That means it's under less pressure from cord-cutting trends, and instead of looking to diversify with a big media purchase mirroring the Time Warner deal, the company is looking to next-generation network technologies as its defining growth engine. Instead of focusing on finding new directions, Verizon is playing to its strengths.

The company leads the mobile wireless service industry in terms of subscriber count, is frequently rated as the best-performing network, and has better customer retention than any of its competitors. Verizon's strong brand and ability to leverage economies of scale help it capture the lion's share of mobile wireless profits in the U.S., and it stands as a likely beneficiary if the shift to 5G network technology and growth for Internet of Things connections turns out be as significant as many tech analysts and industry watchers anticipate.

While its yield is lower than AT&T's and it has fewer years of consecutive annual dividend growth under its belt, Verizon could have brighter growth prospects and still boasts an attractive returned income component. Both companies have solid businesses and will continue to play leading roles in the information economy, and while they're actually more differentiated than they have been in decades, each stock offers a lot to love for income-focused investors.