It's important to look at what's driving subscriber growth at T-Mobile, and whether those factors will continue to prevail in the future. 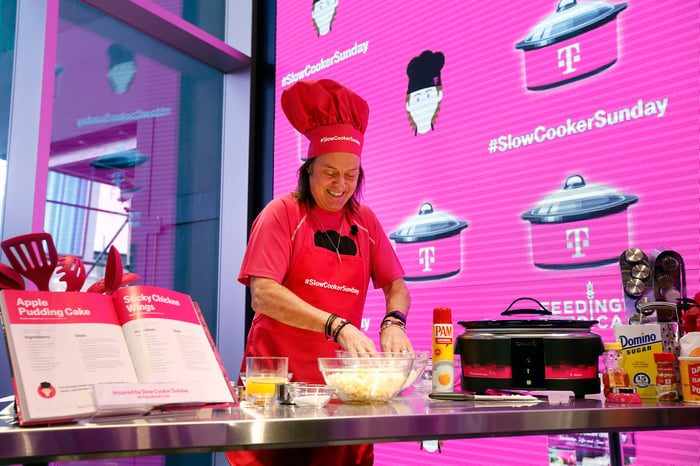 One of the biggest factors helping drive net additions is a reduction in customer losses. T-Mobile posted a record-low fourth-quarter postpaid churn rate of 0.99%. That's down from 1.18% in the fourth quarter last year. Not only is T-Mobile's churn rate lower, it's been able to reduce the absolute number of customers leaving its service while increasing its overall subscriber count. That's an impressive feat.

One reason for the lower churn at T-Mobile is the inclusion of Netflix with its family plans for the full year. Carriers have shown bundling video packages with wireless works to retain customers and improve customer lifetime value. Additionally, T-Mobile introduced a new customer service initiative, "team of experts," last summer as another way to differentiate itself and keep customers satisfied with the service.

T-Mobile will continue to come out with new Un-carrier moves in 2019, which will keep driving customer loyalty and gross additions.

2018 was also a year where T-Mobile focused on several new market segments. After building out its network to cover the same number of people as Verizon, T-Mobile can now target customers all over the country.

One particularly valuable segment is the business and enterprise segment. T-Mobile had practically no presence in that market just a couple years ago. Even today, President Mike Sievert says the company has a single-digit market share of each. That means there's a lot of growth left in those markets for T-Mobile.

T-Mobile was also able to grow its presence in suburban and rural markets thanks to its improved network coverage. The company rapidly expanded its store count in 2017 and 2018 to catch up with its network coverage. And those stores are paying off with more customer growth.

New stores will continue to bring in new customers in 2019, but their impact will slow over time. Additionally, Sievert says T-Mobile will be more selective in its store openings going forward. Still, there's a lot of room to improve in those markets. The company's shares of the rural and suburban markets are sub-10% and 14% to 15%, respectively.

Finally, T-Mobile has targeted specific segments by offering promotional pricing. It offers a unique plan for couples aged 55 and older and it offers a discount to military members. Sievert says its share of those two high-value markets is just 10%. The company may pursue other markets in a similar manner in 2019.

So T-Mobile has a lot of room to grow its gross additions by continuing to go after those markets. Combined with improving customer retention efforts, T-Mobile is poised for another strong year in 2019 coming off a stellar fourth quarter.