FedEx (NYSE:FDX) lost nearly a third of its value last month, according to data provided by S&P Global Market Intelligence. The shipping-services titan is dealing with a host of challenges that forced it to slash its financial outlook for fiscal 2019.

On Dec. 4, analysts at Morgan Stanley said that Amazon's (NASDAQ:AMZN) new airmail delivery service "Amazon Air" already is taking a toll on FedEx's air-shipment business. Worse still, Morgan Stanley projects that by 2025, Amazon could wrestle away as much as 10% of FedEx's and UPS's airfreight revenue. In turn, Morgan Stanley reduced its price targets for the two delivery giants. 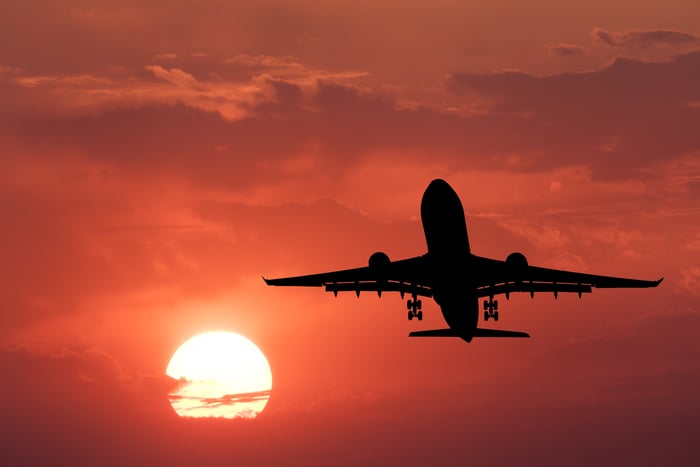 The sun may be setting on FedEx's airfreight growth. Image source: Getty Images.

Then, on Dec. 10, FedEx startled investors when it announced the surprise retirement of the CEO of its Express segment. Bank of America analyst Ken Hoexter downgraded FedEx's shares in response on concerns that "the unexpected retirement could indicate a potential miss on Express operational targets."

That call proved prescient: FedEx would go on to cut its full-year outlook when it reported earnings on Dec. 18.

"Global trade has slowed in recent months and leading indicators point to ongoing deceleration in global trade near-term," FedEx CFO Alan Graf said in a press release. "These trends, coupled with the change in service mix at FedEx Express, are negatively impacting the segment's financial results."

After FedEx's December bludgeoning, it may be tempting to see the company's stock as a bargain, with shares currently trading for less than 10 times earnings. Yet as my colleague Rich Smith notes, the struggling delivery specialist has actually generated negative free cash flow over the past two years. So although it's reporting positive GAAP profits, FedEx has been burning cash.

Moreover, with Amazon Air set to eat into its revenue, FedEx's earnings may come under even more pressure in the years ahead. As such, I'd argue that FedEx's stock is not the bargain that it appears to be -- and investors may be best served by staying away from its shares.