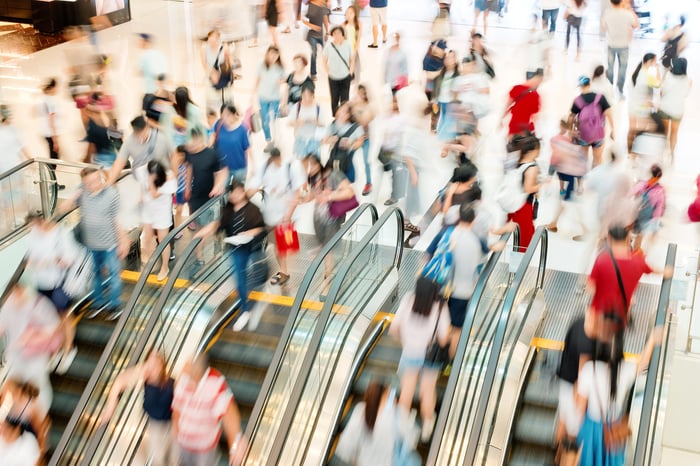 Macy's seemed to be the real culprit here, as the iconic department-store chain said comparable sales increased just 0.7% on an owned basis, or 1.1% on an owned-plus-licensed basis. CEO Jeff Gennette said the peak shopping period began strong, but then weakened in mid-December before picking up again in the last week before Christmas, though he didn't elaborate on the slowdown.

As a result, the company lowered its full-year comparable-sales guidance, on an owned-plus-licensed basis, from between 2.3% and 2.5% down to 2%. It also said net sales for the year would now be flat, down from a prior forecast of 0.3% to 0.7%, and lowered its adjusted EPS (earnings per share) guidance from between $4.10 and $4.30 to between $3.95 and $4.00. Given those numbers, it's not surprising to see the stock down nearly 20%, especially considering the high expectations investors had for the holiday season.

At Kohl's, meanwhile, comparable sales increased just 1.2%, which compares to a 6.9% surge in comps over the 2017 holiday period. Unlike Macy's, however, Kohl's raised the adjusted EPS guidance range from between $5.35 and $5.55 to between $5.50 and $5.55, showing that the retailer managed its inventory well, despite the slow comparable-sales growth.

However, not all retailers reported underwhelming holiday sales. Target (TGT 0.81%) said this morning that its comparable sales jumped 5.7% in November and December, and the company maintained its adjusted EPS guidance for the year at a range of $5.30 to $5.50. However, those numbers were not enough to buck the broader trend, as Target stock fell 3.6%.

Macy's is often viewed as a bellwether for the retail industry, especially in the department-store sector, as the company has flagship locations in a number of major cities and a strong presence in malls across the country. Despite other reports that showed strong sales growth across the industry, Macy's numbers seem to signal that many brick-and-mortar retailers continue to struggle with the current retail environment.

Macy's stock looks dirt cheap after today's sell-off: The stock is trading at a price-to-earnings ratio of less than 7, based on this year's expected earnings per share. The stock offers a dividend yield near 6%. The company has plenty of valuable real estate that could be sold, giving it additional value, and it's already been monetizing some of that property.

Those low valuations show that the market remains skeptical about brick-and-mortar retail: Even retailers able to deliver comparable-sales growth, and to transition to the omnichannel and e-commerce era, have struggled to grow profits. The sector, due in part to the influence of Amazon, has become in some ways a "race to the bottom" that's cut industry profit margins, with competitors forced to invest in store revamps, faster delivery, and better pickup options.

That may eventually change as the sector continues to shake out, with weaker competitors going bankrupt or closing stores. But for the foreseeable future, even well-run retailers may struggle to grow profits. Considering that fact, and that Macy's barely grew sales in one of the best consumer environments in memory, it's no surprise to see the retail sector pulling back today.