A first “native” version of the software could provide a preview of Google’s newfound abilities.

Alphabet's ( GOOG -0.87% ) ( GOOGL -0.68% ) Android Auto app has been around for a few years now, but it has always required a smartphone to enable its use while behind the wheel. Google has been working on a native version of the software -- custom-designed and loaded into a car's system without the need for additional hardware -- and the first announced model featuring it was just announced: Volvo Cars' Polestar 2.

Volvo Cars, which is a subsidiary of China's Geely Automobile Holdings ( GELYF -3.39% ), has been taking preorders for its plug-in hybrid performance coupe Polestar 1, which will carry a starting price tag of $155,000. The company's first all-electric vehicle (EV) will enter production later this year and debut sometime in 2020. Dubbed the Polestar 2, it will be priced in the same range as Tesla's Model 3, and the company has promised further specifics on the vehicle in the coming weeks.

The Polestar 2 will feature an infotainment system powered by Android Auto. That makes Volvo Cars the first announced automaker to make use of the software as a built-in feature of a production vehicle. 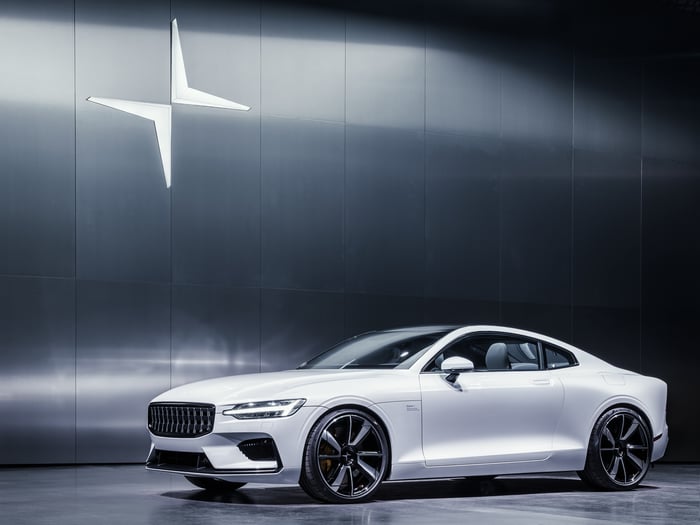 The evolution of the in-cabin experience

Automakers have been incorporating technology into the interiors of their vehicles, with mixed results. Android Auto has been an attempt to mitigate subpar in-cabin tools. The phone app works once on the road and plugged into a compatible car or aftermarket stereo via cable -- or in a small handful of cases, via wireless connection. Once plugged in, the app uses Google Assistant and voice commands to provide directions, control music, and connect with other apps.

During Google's I/O developer festival in May 2018, the tech company showed off its aspirations to be more than an extra feature riding around in the car. The vision for Android Auto is to be the heart of the infotainment system, controlling the whole experience for the person behind the wheel. The system on display at Google I/O featured a large tablet-sized touch screen and used Google Assistant to handle voice commands.

The Polestar 2 will apparently feature something akin to this, essentially transforming the vehicle into an Android mobile device on wheels, without the need for a stand-alone tablet or smartphone to do the computational work.

The native version of Android Auto in the Polestar 2 is the first deal of its kind for a tech company. It essentially makes Volvo Cars' first EV a part of the growing ecosystem of Google hardware -- which includes the in-house-built Pixel lineup, as well as third-party devices carrying the Google name. That segment of Alphabet is starting to pay off, reportedly contributing several billion dollars in profit during 2018.

That's a welcome addition, as most of the tech giant's bottom line is still generated through advertising. Nevertheless, Google is still first and foremost a software concern, and extending the reach of its software is the best way for the company to grow. Finding a way to better integrate into vehicles is part of that overarching strategy. And if the Polestar 2's in-cabin experience is a success, other automakers could follow suit in making Android Auto the brain in more vehicles.