It's yet another vision to completely remake an industry.

Elon Musk wants you to cut the cord to cable. He's trying to raise $500 million for his SpaceX rocket company to blanket low-orbit space with up to 12,000 satellites to provide high-speed internet service -- and he wants the first set of them in orbit by the middle of the year.

That might seem like an ambitious deadline, but anyone who's watched Musk push SpaceX, Tesla (TSLA 4.67%), or even his Boring Company forward knows he likes to go big. Making cheap internet available to everyone around the globe, and having half the world's traffic go through his constellation of Starlink satellites? For the man who is arguably one of today's most visionary leaders, it's just another day ending in "y." 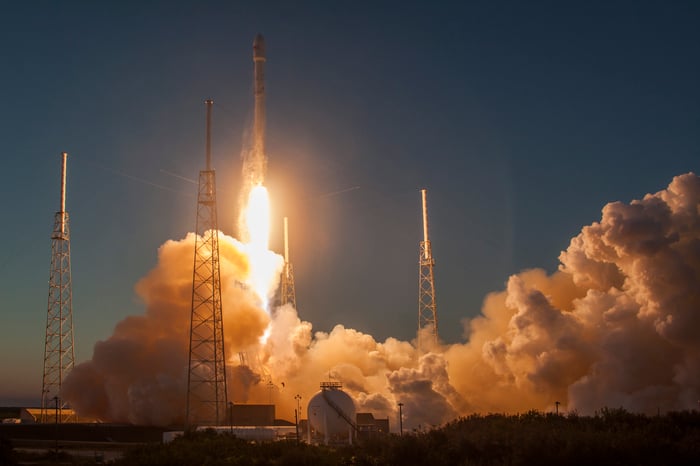 Early last year, SpaceX launched two prototype satellites into orbit, named Tintin A and Tintin B, and installed a series of ground stations around the country to communicate with them. SpaceX plans to launch 1,600 satellites over the next few years -- the system will become operational when 800 satellites are in orbit -- and to launch the full spectrum of 12,000 satellites by 2025.

Once in orbit, Starlink will receive signals from ground stations via radio waves. It will then transmit the signals between satellites with lasers; when a signal reaches the satellite over its destination, it will be beamed down with radio waves again. The process will speed communications to a rate that's about twice what is possible with optical fiber.

The promise of the system is that it will provide direct-to-consumer wireless connections, instead of having signals rerouted through multiple waypoints as with cable and existing satellite TV, which results in relatively expensive service. SpaceX looks to dramatically reduce the cost of internet service for everyone.

Low-orbit satellites, however, are not a flawless or risk-free solution. There are concerns about the abundance of space debris in Earth's orbit. Meanwhile, the Institute of Electrical and Electronics Engineers estimates that every six years, there's a 45% chance of an injury or death from a Starlink satellite crashing to Earth.

Although much of a satellite will burn up on reentry, not all of it will. Launched in a regular stream until all 11,927 are in orbit, SpaceX's satellites will begin falling out of the sky on the same basis six years after the launch of the first tranche, with an average of five per day reentering the atmosphere. The likelihood of any individual satellite causing a fatality is extremely small, but with so many satellites reentering the atmosphere, the risk adds up.

Of course, not everything works out as Musk intends. Tesla just missed its fourth-quarter production-rate goal for the Model 3 and cut the price of the vehicle by $2,000, sending its shares tumbling. Also, the Boring Company's recent reveal of its tunnel under Los Angeles left many underwhelmed. Instead of the autonomous 16-passenger vehicle zipping along at speeds up to 150 mph that was promised, a specially equipped Tesla bumped along an uneven rail system at 50 mph.

Remember, though, that the 247,000 Teslas delivered in 2018 nearly matched the number of vehicles Tesla had delivered in all previous years combined. Furthermore, the tunnel demo was just that, a prototype of what Musk envisions for travel -- and the tunnel is only a mile long, so superfast speeds aren't practical. Also, built for just $10 million, the tunnel is vastly cheaper than the $200 million to $500 million per mile local governments typically pay for subway construction.

To be fair, the tunnel was built on and adjacent to SpaceX property. A tunnel in the middle of a major city won't be as easy or cheap to build as the demo tunnel -- in fact, Musk canceled one of his test tunnels under Los Angeles because of opposition to the project -- but it's still likely to be significantly cheaper than the cost of tunnels built today.

Musk is looking to make human travel to Mars a reality, and revenue from his constellation of Starlink satellites would be the means to finance it. Although this massive array of satellites circling the globe does present risk (both for Earth and for Musk), it is quite likely that he's about to embark on a new course that will radically change how we connect with one another over the internet.

That alone should greatly concern cable operators, who could see their businesses completely upended. It should certainly be more of a concern than for the average person to wonder whether Tintin A or Tintin B will fall on their house.