To simplify the question, I'm going to define a "millionaire-maker" as a stock that can return 10 times its value in 20 years.

Investors in Shopify (NYSE:SHOP) have already had a great ride: shares are up 500% since its 2015 initial public offering and 650% since February of 2016. That might make you feel like you've missed your chance with Shopify. I'm here to tell you that isn't necessarily the case. 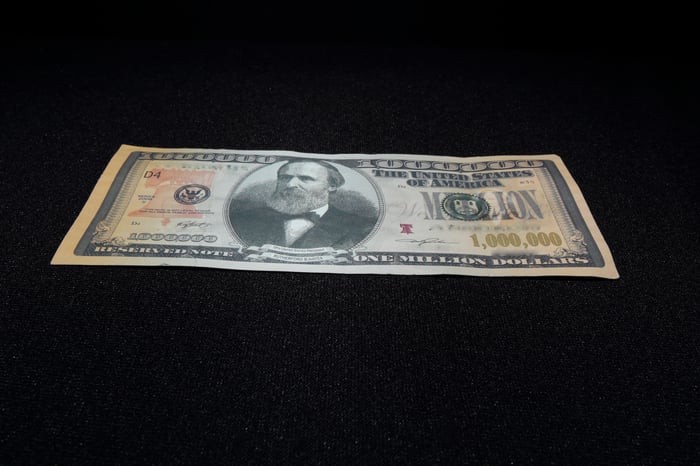 A mission with a million different directions

Let's think for a second about some of the stocks that have returned the greatest value over the last 20 years. Think about Amazon (NASDAQ:AMZN): It started out selling just books, and has become an Everything Store, streaming giant, and cloud force that is redefining almost every industry in commerce.

Or think about Alphabet (NASDAQ:GOOGL) (NASDAQ:GOOG) -- the parent of Google -- which started out with a simple search engine. Today, it offers up eight different tools that each have over a billion users, and is working on moonshot projects that could fundamentally change our everyday lives, hopefully for the better.

It would be difficult for someone around in the founding days of either company to have envisioned the scope of influence that each has today. And yet, one simple sentence from each company's beginning would have given us a clue: its mission statement.

Amazon's was simply "to be earth's most customer-centric company."

Alphabet's (then Google's) read: "to organize the world's information and make it universally accessible and useful."

Both of these would have been helpful in predicting what was to come. That's because they share the three traits I consider paramount to finding millionaire-making stocks. Their mission statements are:

Which brings us to Shopify. Right now, the company makes most of its cash from a two-pronged approach: a subscription platform that allows anyone to set up an e-commerce site, and "merchant solutions" like help with shipping packages and collecting online payments.

But if we want to know where the company is going, we need to analyze its mission: "to make commerce better for everyone."

This checks all three boxes. It is simple, optionable -- as the addition of merchant solutions a few years ago clearly shows -- and inspirational. And Shopify's founder and CEO, Tobi Lutke, has already demonstrated that this mission statement is not an empty one.

Owner-operators with skin in the game

Speaking of Lutke, there's a lot to like. He started a snowboarding company in 2004 and developed his own platform to sell his wares. Over time, it became apparent the platform, rather than the snowboards, was what the world really wanted. Born a coder, Lutke was happy to oblige.

Today he still owns over 60% of Shopify's Class B shares, meaning his net worth is closely tied to the fate of the company. Just as importantly, it means that he -- the person who has grown the company from scratch -- remains in control.

When an owner-operator is at the helm, I believe there's enormous intrinsic (read: not wringing out short-term profits) motivation to build something with long-term value. Perhaps it's no coincidence, then, that both Amazon and Alphabet are still run by their founders as well.

Just as important, Shopify's employees -- the people charged with carrying out this massive vision -- also appear to be motivated. According to over 360 anonymous reviews on Glassdoor.com, Shopify garners 4.1 (out of 5) stars -- a very good score. Almost all (93%) approve of the job Lutke is doing, and nearly 80% foresee a positive future for the business.

A barbell technique that could lead to massive returns

Finally, and probably most importantly, Shopify uses a technique I look for in all "millionaire-maker" stocks: the barbell technique. Here's the simple way of viewing it:

Let's start with the first. Shopify is protected by two very powerful moats. The first is high switching costs. Once a company set up its e-commerce operations on Shopify, it would be painful to switch. Not only would the financial costs be high, but retraining employees, dealing with downtime, and other headaches would take their toll.

Just as important, Shopify is benefiting from a massive network effect. As more and more merchants join the platform (there are over 500,000 today), third-party app developers are incentivized to build tools in Shopify's ecosystem. The more tools it makes available to them, the more merchants it draws in; it's a virtuous cycle.

And if you look at the company's history, it has also shown success at branching out toward ancillary services. Back in 2013, the merchant solutions segment -- which includes help in tracking and shipping packages, as well as collecting payments -- would have been considered a "high-risk" venture with the potential for high rewards.

At the time, high-margin subscription revenue was the real business driver. But look at what's happened since then: 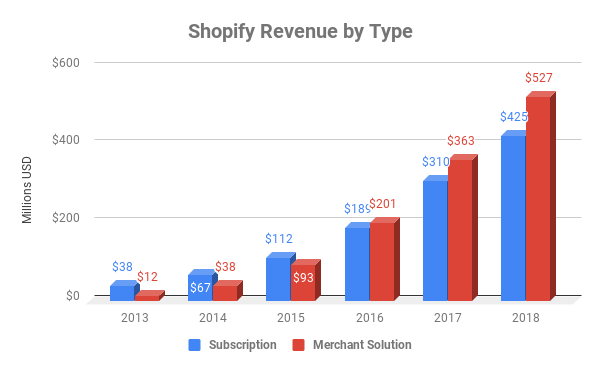 Data source: Shopify filings with the Securities and Exchange Commission. Chart by author. All figures rounded to nearest million; 2018 figures are for trailing 12 months ending Sept. 30, 2018.

Will there be other business divisions in the next 20 years? It would be silly to assume that Shopify won't grow, change, and evolve over time. But it would be equally silly for me to wager exactly what they'd be and how successfully they would roll out.

I believe that the company's history shows that such optionality -- the ability to find ever more ways to fulfill its mission -- is not only possible, but probable. That's why I think Shopify can still be a "millionaire-maker" stock, and it's why I have 6% of my real-life portfolio devoted to the stock. It's why I think you should consider adding your own shares as well.