Apple investors are experiencing short-term pain, but the long-term picture is much rosier.

Apple (AAPL 1.21%) investors have had a rough time of it over the past few months. Since its recent top at $233 per share back in September, Apple's stock plummeted 40% to the $140s after the company's Jan. 2 pre-announcement that it would miss first-quarter estimates, but has since bounced back to around the $150 mark as of this writing.

Is the huge sell-off a harbinger of the end of Apple, or does it present a huge buying opportunity? As I've written in the recent past, I think it's the latter. For a few key reasons. 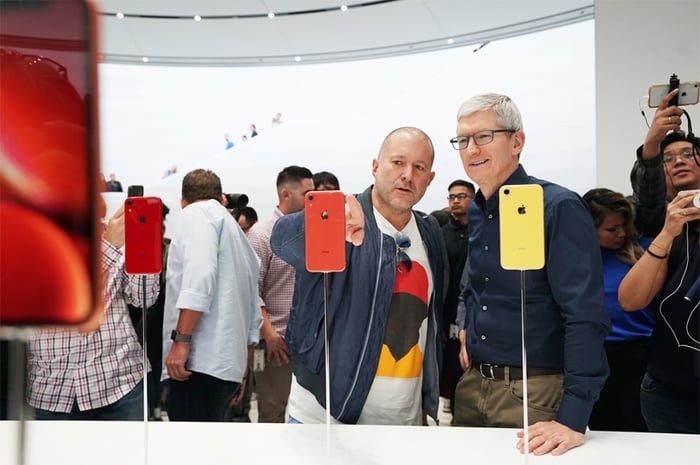 Even within Apple's disappointing preannouncement of quarterly results, there was good news. CEO Tim Cook reported the company's services segment would be over $10.8 billion in Q1 -- 28% higher than last year. Services include AppleCare, Apple Music, iCloud, and App Store sales (for which Apple earns a 30% commission).

Services will reach an all-time high in every single geography for Apple, said Cook, even the Chinese market, where iPhone demand has fallen off a cliff. That's because services aren't tied to sales of new devices, but rather to the overall installed base. And while some may be nervous about certain companies like Netflix attempting to bypass the App Store's commission, this is relevant to a relatively small amount of the overall services mix.

In addition, Apple should be launching its own TV streaming service later this year, which could further light a fire under the already strong services segment.

I am not sure investors fully understand the magnitude of the investment Apple is putting behind the planned streaming service. Apple is producing shows with Steven Spielberg, Oprah Winfrey, Reese Witherspoon, Jennifer Aniston, Richard Gere, Kristen Bell, La La Land director Damien Chazelle, M. Night Shyamalan, and many others.  Apple's installed base of over 1.4 billion devices  is a good-sized one to market a streaming service of well-known Hollywood names to. For comparison, the largest streamer, Netflix, had 137.1 million subscribers as of last quarter.

Despite the China woes, Apple is retaining customers and expanding its user base. According to Consumer Intelligence Research Partners (CIRP), roughly 16% of new iPhone units went to Android switchers in November, which is up from the 11% mark in November 2017.

That's encouraging, because if Apple is still adding users to its ecosystem, iPhone unit declines should eventually find a bottom, even if the iPhone upgrade cycle is lengthening. Putting on my sociologist hat, holding on to one's phone for longer is also likely to make switching operating systems that much more dramatic, which means the likelihood of people switching out of iOS should go down even further.

That means that when the time comes to upgrade to a 5G-enabled phone, Apple is likely to retain its customers, all of whom should eventually upgrade to 5G devices when they become more widespread -- likely in the 2020s.

Finally, in an age of widespread hacking and data breaches, Apple's focus on privacy and security should benefit the compan. In fact, Apple displayed a tongue-in-cheek billboard this week for the Consumer Electronics Show in Las Vegas, emphasizing that very thing. ""What happens on your iPhone, stays on your iPhone," said the advertisement.

Linked to the privacy emphasis is also Apple's focus on health. Over the past few years, Apple has been investing in innovation around digital health records, and last fall it received FDA clearance for the KardiaBand electrocardiogram (EKG) reader accessory to the Apple Watch. That feature can detect atrial fibrillation (afib) early on, which could potentially save your life (that's pretty good brand equity there!).

The health opportunity is very real for Apple. In fact, Tim Cook said in a recent CNBC interview that years from now, people may say that Apple's greatest contribution to mankind has been in health. So I expect some big things in this segment.

All of this for a low, low price

One might think that with all these positive long-term drivers, Apple stock would fetch a premium to other companies, but that's not the case. With a forward price-to-earnings ratio of just 12 (including $130 billion in extra cash), Apple is priced at a huge discount. If you're a long-term investor, don't let one quarter overwhelm all these long-term positives. Apple is a buy.