Check out the latest Walmart and Baidu earnings call transcripts.

Walmart (NYSE:WMT) will soon be delivering groceries with autonomous vans powered by Baidu's (NASDAQ:BIDU) Apollo platform. Udelv, a California-based autonomous vehicle start-up, will deploy the vans for Walmart in a pilot program in Surprise, Arizona.

Udelv currently provides driverless deliveries for grocers in Oklahoma City and the Bay Area city of San Mateo. It has completed about 1,200 deliveries to date, and aims to deliver up to 100 autonomous vans to customers this year. It also recently developed a second-generation autonomous van, the Newton, through a collaboration with Baidu. 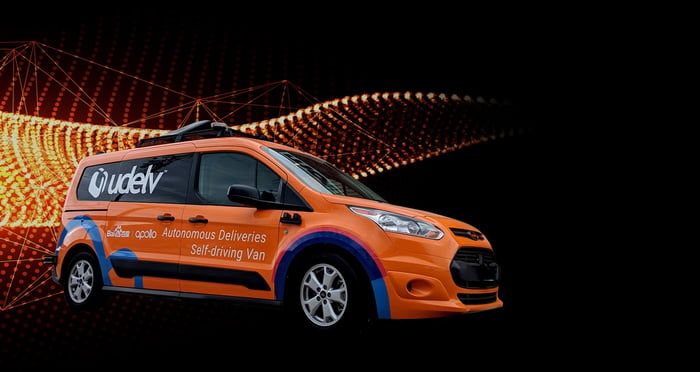 How does this deal help Baidu?

Walmart's deal with Udelv doesn't represent a direct partnership between the retailer and Baidu, one of China's biggest tech companies. But it still represents an extension of Baidu's expansion into the United States, where it currently operates a self-driving car lab in Silicon Valley and is testing out driverless vehicles for disabled people with mobility issues.

Baidu was cleared for driverless tests in California in late 2016. It launched Project Apollo, its open source platform for autonomous vehicles, the following year. Major automakers like Ford, Honda, and Daimler are already building Apollo-powered vehicles, and Baidu claims that its platform now has over 130 partners and 12,000 developers worldwide. Udelv's driverless fleet runs on the latest version of the platform, Apollo 3.5.

Baidu's main rival in the U.S. is Alphabet's (NASDAQ:GOOG) (NASDAQ:GOOGL) Waymo, which began as Google's self-driving project a decade ago. Waymo announced an autonomous vehicle partnership with Walmart last year, but its vehicles ferried customers to Walmart's stores to pick up pre-ordered groceries instead of directly delivering them. However, Walmart is also delivering groceries with Ford's driverless cars in another pilot program in Miami. 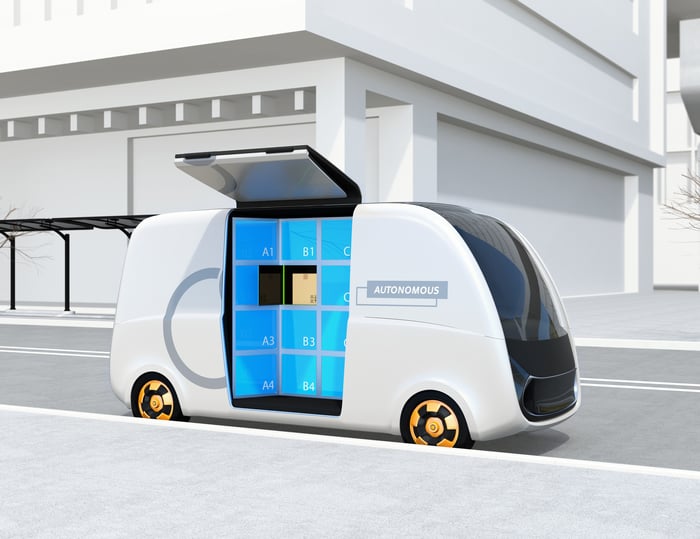 In China, Baidu's driverless car efforts help it expand its ecosystem beyond its 70% share of the country's online search market. Baidu Maps is also one of the top mapping apps in China, which makes it easier to develop a navigation platform for driverless cars. Baidu plans to launch driverless cars across the country with Chinese automaker Chery next year.

Walmart is already ramping up its delivery efforts across China with the help of its main e-commerce partner, JD.com. Therefore, the Udelv pilot program could pave the way for a future driverless deliveries deal between Walmart and Baidu, which already integrates JD's e-commerce services into its core app.

Apollo also complements the growth of Baidu's Mini Program ecosystem within its Baidu app (which lets users buy products, hail rides, and perform other tasks) and the expansion of its Alexa-like DuerOS across smart speakers and other connected devices. All these moves ensure that Baidu keeps collecting data from its users -- even if they aren't conducting searches on its main site.

None of Baidu's driverless car efforts will significantly boost its revenue anytime soon. But over the long term, they could expand its ecosystem beyond online search and advertising platforms.

How does this deal help Walmart?

Walmart is conducting all these driverless tests to counter Amazon. These efforts complement the expansion of its e-commerce marketplace with the acquisitions of Jet.com and Flipkart, its takeover of smaller specialty e-tailers like Bare Necessities and Art.com, and the introduction of new delivery and pickup options.

Walmart's e-commerce investments are weighing on its bottom-line growth, but they'll help the company stay relevant as it turns its massive network of stores -- it has over 5,300 locations in the U.S. alone -- into fulfillment centers for online orders.

The replacement of warehouse workers and drivers with robots, along with the expansion of self-checkout kiosks and cashierless stores, should also significantly reduce Walmart's operating expenses over the long term. Driverless cars are expected to hit public roads within the next few years, so it makes sense for Walmart to test out different technologies from Baidu and Alphabet's Waymo before scaling up its delivery network.

The retail and driverless car industries are converging, and we should see a flurry of new deals between retailers and autonomous vehicle tech providers over the next few years. That should lead to more win-win partnerships between companies like Walmart, Waymo, and Baidu.