The retail giant adds custom art and wall decor to its home-goods portfolio.

Walmart (WMT 0.11%) recently agreed to buy online art and wall decor retailer Art.com for an undisclosed sum. The all-cash deal, which is expected to close in early 2019, could add more than $300 million to Walmart's annual revenue, according to CNBC.

Walmart calls Art.com, which was founded in 1998, the "world's largest online retailer" of art and wall decor. Its portfolio will add 2 million curated images -- in posters, prints, and other art pieces -- to Walmart's home-goods business. Art.com allows customers to customize its products online, most of which are printed on-demand after an order is placed -- so it doesn't house large inventories of posters and prints. It also provides custom mounting and framing services with each order. Art.com will continue operating as a stand-alone site, but its products will also be offered on Walmart.com, Jet.com, and Hayneedle.com.

Another brick in its e-commerce wall

Its $3 billion takeover of U.S. e-commerce site Jet.com and $16 billion buyout of Indian e-commerce site Flipkart were the two largest acquisitions. The other purchases -- which reportedly cost between $50 million to $300 million -- expanded its portfolio into specialty markets like shoes, menswear, lingerie, and outdoor products.

Those moves could all help Walmart counter Amazon's expansion into private-label products -- which now include apparel, shoes, toys, baby products, food, and even mattresses. The retailer could also counter Amazon's expansion into brick-and-mortar stores with its acquisition of Whole Foods, its introduction of Amazon Go stores, and a new 4-star store in New York that features home goods, toys, and other products.

Art.com targets consumers who purchase art and wall decor on Amazon -- which currently offers mainly products in specific sizes (mostly from third-party sellers) instead of fully customizable products. Walmart believes that the U.S. art and wall decor market could be worth $10 billion in annual sales, so bundling Art.com's products with other home goods across its other e-commerce sites could shore up its defenses against Amazon. Walmart can also leverage its massive network of over 3,500 Supercenters across the U.S. to quickly expand Art.com's reach. 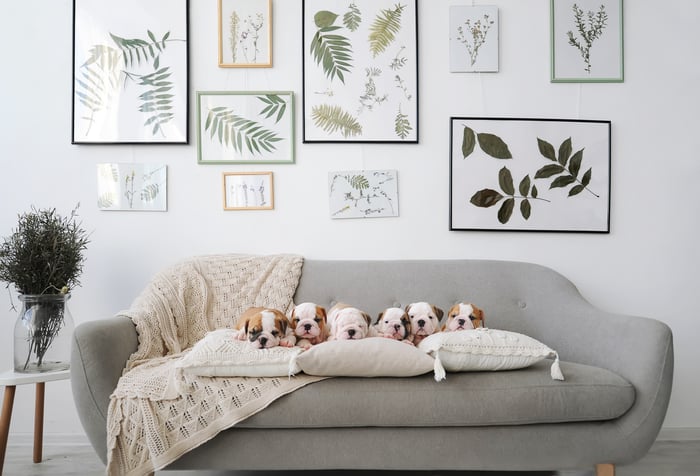 $300 million is still a drop in the pond

Annual revenue of $300 million may sound like a big figure, but it would represent only about 0.06% of Walmart's estimated revenue for fiscal 2020, which starts on Feb. 1, 2019. However, $300 million is still higher than the revenue generated by many of Walmart's past purchases. Modcloth, Bonobos, and Moosejaw all generated about $100 million in revenue before being acquired.

However, all those acquisitions form part of Walmart's larger defense against Amazon, and the retailer's latest earnings report -- which revealed a 43% year-over-year jump in U.S. e-commerce revenue -- indicates that those efforts are paying off. Walmart's e-commerce revenue accounts for a single-digit percentage of its top line, but it indicates that it won't be rendered obsolete by Amazon anytime soon.

However, investors should note that these acquisitions (particularly Jet.com and Flipkart) -- along with rising wages, integration costs, price competition, and tariffs -- could all throttle Walmart's near-term earnings growth. The company hasn't revealed much information about the profitability of newer e-commerce assets like Art.com. That's why analysts expect Walmart's earnings to slip 3% next year, even as its revenue rises 3%.

Walmart's takeover of Art.com isn't surprising, since it expands its e-commerce ecosystem and complements the recent redesign of Walmart.com -- which highlights the expansion of its home-goods category. The purchase probably won't move the needle for Walmart on its own, but it's definitely another step in the right direction.