Editor's note: An earlier version of this article misquoted the nonmortgage debt for Gen Z. It has been updated.

Eight in 10 members of Generation X (ages 36 to 51) have debt, which beats out millennials (ages 20 to 35) at 75%, and baby boomers (ages 52 to 70) at 69%, according to a recent LightStream Survey conducted by the Harris Poll. Perhaps more significant, 22% of Gen Xers believe that it's almost impossible to pay off significant debt once you rack it up.

In addition, Gen Xers have the most nonmortgage debt, and 25% said they're not confident about how they're managing their finances. That does not mean they're not willing to make sacrifices to improve their finances. More than 40% said they would "give up favorite pastimes, like shopping or sports (including attending a game or watching on TV) for five years, if it meant getting rid of their payments," according to the study from LightStream, a division of SunTrust Bank. 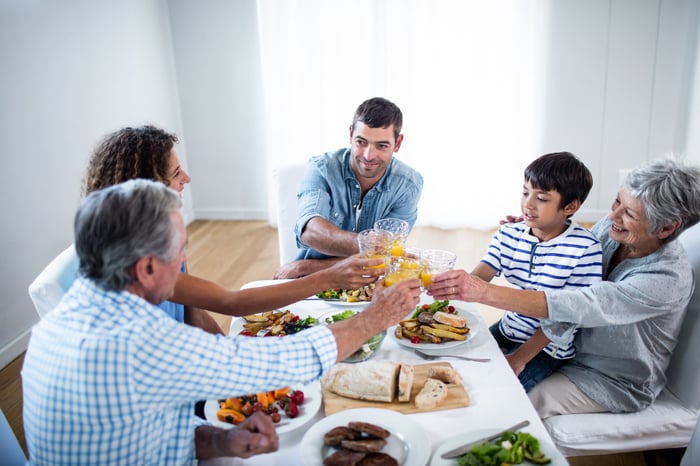 Generation X members may have both children and parents to take care of -- a real impediment to managing debt. Image source: Getty Images.

"Dipping into savings or cashing out investments are certainly options to reduce debt," said LightStream senior vice president Todd Nelson. "But this may be difficult, particularly for Gen Xers. They're often financially stretched. They're juggling to help their adult children and support aging parents, while also trying to save for emergencies and retirement."

Nelson suggests debt consolidation as an option -- using one loan to pay off credit cards and other high-interest debts.

That's a potential money-saving solution, but it's also potentially risky. A consolidation loan can lower interest rates, but it also opens up available credit, which allows you to run up new debt. So it's important to have the discipline to use a consolidation loan to pay down debt faster without accumulating more credit card debt.

It's important to note that LightStream offers consolidation loans (as well as other types of loans), so Nelson has a self-interest in recommending them. That does not necessarily make a consolidation loan a poor choice. This type of loan often allows consumers to lower interest rates while having to make only one payment instead of many.

There are, however, other options that work as well. The first is to simply make a budget and stick to a plan that allows you to pay down your debt. That only works if you can adjust your spending to produce a surplus each month.

If your finances result in a monthly deficit, then you have a number of choices. First, you can change your spending or reduce major costs. That could involve downsizing where you live or eliminating a significant cost (perhaps going from two vehicles to one).

For many people, however, there's not enough fat in their budget to trim, and cutting expenses by moving actually costs money in the short term. For these people, earning more money may be the best way to get out of debt. Taking a second job can produce the extra cash needed to pay down debt.

However you tackle your debt, it's important to do so with a clear plan. That should include how you will handle a rainy day (such as an unexpected medical expense or short-term unemployment). It's also important to remember that this won't be a quick process. Still, chipping away at your debt will work as long as you give it time and stick to your plan.