While working at Salesforce.com, Peter Gassner realized that the pharmaceutical industry had specific cloud-based needs. These needs were so industry-specific that Salesforce couldn't be the answer to the sector's problems.

Armed with that information, he founded Veeva Systems (NYSE:VEEV) in 2007 to build a cloud solution for drug companies. Investors -- myself included -- have been rewarded handsomely; shares have nearly quintupled since February 2016. That's not surprising given that the company has been capturing huge swaths of its total addressable market and continues to add new products to its list of offerings. 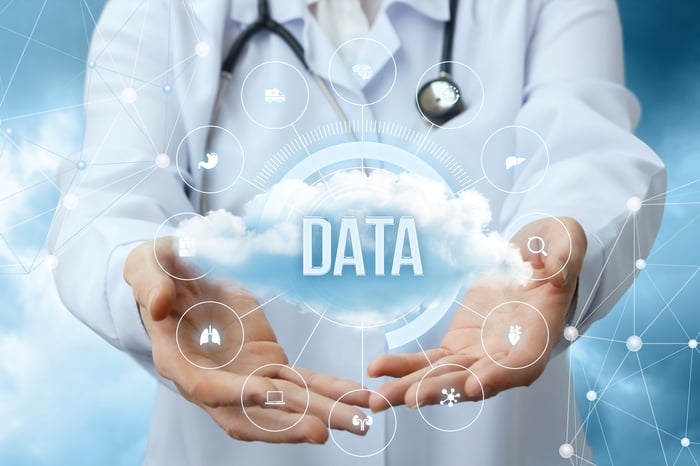 And yet, even though I'm a shareholder myself, I'm doubting that Veeva has the potential to truly be a "Millionaire-Maker" stock -- a stock with the potential to increase in value ten times over in the course of two decades.

A barbell technique that keeps on working

While the visual might not be perfect, best-selling author and former trader Nassim Nicholas Taleb has highlighted a way for companies -- or individuals -- to continue pursuing opportunities without jeopardizing themselves in the long run. He calls it the barbell technique:

Veeva is a textbook implementation of the barbell method. When the company got its start, it focused on providing customer relationship management (CRM) solutions for drug company salespeople. It then took the reliable cash streams from that Software-as-a-Service offering and invested in Vault -- an entirely different venture.

Vault aims to be a one-stop cloud repository for everything a drug company needs to bring a compound from the idea stage through clinical trials and FDA approval, and finally to the market. It has been a resounding success. 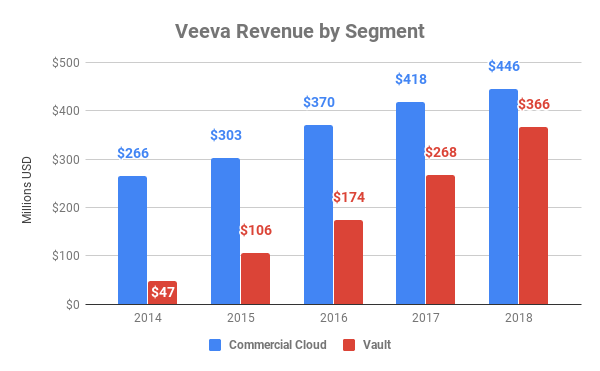 Within Vault, the company adds two or three new key products every year. I wouldn't be surprised to see it outshine the commercial cloud (principally the CRM suite) in the next 18 months.

Not only that, Vault has been so popular that companies outside of life sciences -- namely consumer-packaged goods and chemical companies -- have asked for access to a Vault-esque product. Veeva rolled it out, on a limited basis, over the past 18 months.

The business is largely protected by high switching costs. A drug company that subscribes to Veeva's services is putting a lot of mission critical data on a single platform. Migrating that data to another provider would be costly, requrire retraining entire staff and even risk losing essential data.

When I began researching this article, I used three broad criteria to see if any company was a "Millionaire-Maker." The barbell strategy was the first requirement, and Veeva passes that test with flying colors. But the other two -- mission statement and evidence of skin in the game -- leave me wanting more.

Let's start with the mission statement. Some might consider this to be an empty piece of business jargon that doesn't mean anything, but I believe that a well-crafted mission statement acts as a compass.

Every great mission statement should have three characteristics:

The closest thing I could find to a mission statement is actually its vision statement. It reads: "Building the industry cloud for life sciences."

That only checks one of the three boxes -- it's very simple. But it is not optionable. In fact, it clearly states that it will be building the cloud for life sciences -- that's it. This, of course, ignores the fact that the company has already made strides outside of life sciences. And it's not -- in my opinion -- very inspirational. Telling us why that will help the world -- say, to allow drug companies to focus their efforts on improving lives and not tracking paperwork -- would do the trick.

This isn't surprising though -- a mission and vision statement are not the same thing. While there's overlap between the two, I draw an important distinction. A mission statement tells your organization its reason for existing. It answers the "why." A vision statement gives people a mental idea for what the organization would like to become. If offers more of a "what" and "how."

It might sound like I'm quibbling -- and perhaps I am -- but for long-term investors, mission statements matter. A publicly traded company needs a mission statement as a compass -- and its important that it is optionable and inspirational. If employees and the public don’t know why the company exists, or how it fits in the larger picture of moving society forward, it cannot reach its full potential.

Next, I believe companies that produce outsized gains often have owner-operators who are aligned with shareholders' interests. On the one hand, having the founder (Gassner) still at the helm is a big deal. The fact that he owned -- as of the last proxy statement -- nearly 60% of Class B shares means his skin is firmly in the game.

But when I went to visit Glassdoor.com, a site where employees anonymously review their employers, I noticed a troubling trend. In July 2017 the reviews were largely positive -- but that's no longer the case.

The reviews do not paint a flattering picture of Gassner, and they are quite detailed. One reads:

"I do not dispute the fact that [Gassner] has helped the company get to where it is today. However, there is a cult like fear of the CEO at this company. It is also starting to trickle down to the senior executives and their approach."

This isn't the only reviewer who voices this opinion.

Should Glassdoor reviews be considered absolute fact? Certainly not. Are they open to manipulation? Absolutely. That's why -- even though this trend concerns me -- I'm not selling my shares, which currently account for roughly 5% of my real-life holdings.

But I'm also not adding shares either. While I've always wished the company had a clearer mission statement, the sudden rise in negative reviews is a new factor. I want to take time to see if these issues are real, or just the result of serious growing pains at the company.

I guess you could say that means I'm still a believer in the company and its stock, but less so than I have been in the past. And as of right now, I'm not sure it deserves the title of potential "Millionaire-Maker."